Understanding the Risks of Rodent Poisons to Birds of Prey 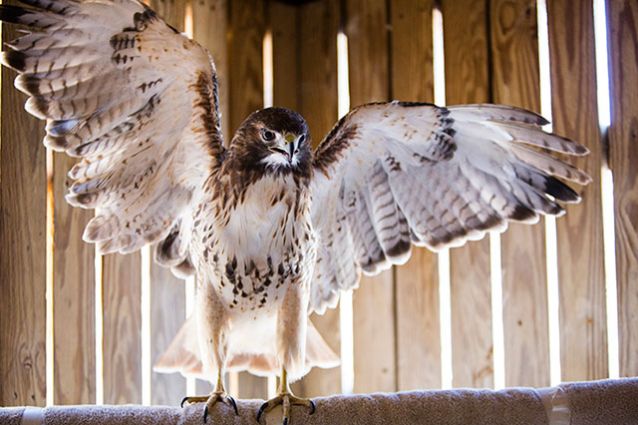 Maureen Murray, V03, director of Tufts Wildlife Clinic and clinical associate professor at Cummings School of Veterinary Medicine, has been studying rodenticide exposure in birds of prey for over a decade. Exposure to rodenticides occurs when people use these chemicals to kill unwanted pests. Mice and rats, or possibly other animals, eat the poison, and then the birds eat the poisoned prey.

Murray has witnessed a steady increase in the number of birds of prey that come into Tufts Wildlife Clinic with rodenticides in their systems—some with fatal levels. But even Murray was taken aback by the results of her most recent study.

“One hundred percent of the red-tailed hawks in the present study tested positive for exposure to anticoagulant rodenticides,” said Murray. “In my 2017 paper, 97 percent of the hawks tested were positive, which is very high. But still, 100 feels like a much more dramatic number.”

The study, published in Environmental Toxicology and Chemistry, also found that 91 percent of the birds tested positive for two or more different types of anticoagulant rodenticide (AR), with the second-generation ARs (SGARs) brodifacoum, bromadiolone, and difethialone found most frequently. SGARs are more potent than their first-generation predecessors, to which some rats—particularly in Europe—developed an immunity.

ARs work by thinning the blood and cause the animal to slowly bleed to death. A single feeding of an SGAR potentially contains enough poison to kill a rodent. However, it takes a few days for the animal to die, and in the meantime, they may continue to feed on the poison. During that time, they may be eaten by birds of prey, such as hawks and owls. Even after the animal dies, its carcass contains SGAR residues that can be lethal for scavengers.

In addition to spontaneous and internal bleeding, for the impacted wildlife Murray sees in the clinic, secondary injuries such as lacerations or cuts can become life-threatening because the blood can’t clot.

For the present study, Murray sampled 43 red-tailed hawks, which were admitted to the clinic but did not survive due to their injury or illness. She focused on this particular species because they are the most common bird of prey seen by the clinic and also because they’re generalist predators, which offered a sense of how widespread the contamination is in the food chain.

“The ability of these rodenticides to permeate the food chain and ecosystems is pretty remarkable,” said Murray. “Other studies have shown residues in songbirds and insects. And that's what this study reflects. Red-tailed hawks eat a lot of small mammals, but they also eat birds, reptiles, or amphibians; they might scavenge. Ultimately, their prey base is very contaminated.” 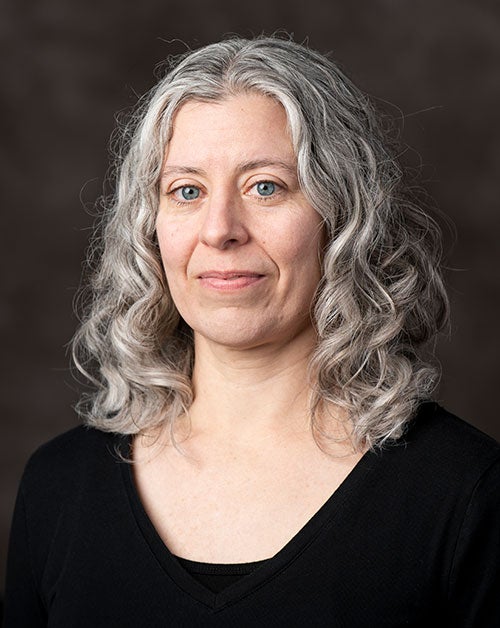 “There's no such thing as a safe poison, but even among the range of poisons, anticoagulant rodenticides are a category that has very significant risks to our wildlife species,” said Maureen Murray. Photo: Alonso Nichols/Tufts University
To test for exposure, she took a sample of liver tissue, where the SGAR compounds are stored, from each deceased red-tailed hawk. She also took a blood sample, because she wanted to answer the question of whether blood could be used to determine if a bird had been exposed to SGARs.

“The question is: Is there a way, in a live bird, to understand if that bird has been exposed to ARs or not? That can be important if there's a target population you want to sample, like birds migrating through a specific area, or a threatened or endangered species.” said Murray.

However, Murray found that blood tests were not a viable option to screen for SGAR exposure in red-tailed hawks, as blood was not sensitive enough to detect the compounds found in the poison—except in birds that ingested a lethal amount.

There’s a reason SGARs exist: They’re effective, and no one wants a mouse in their house. Still, there are some measures in place to reduce the use of SGARs.

In 2008, the U.S. Environmental Protection Agency (EPA) issued mitigation measures that tightened the rules around the sale of SGARs. The EPA’s decision was prompted by evidence of exposure among children, pets, and “non-target wildlife” (animals such as birds of prey that aren’t meant to be harmed by the poison).

The regulations, which didn’t go into effect until 2011 and after, prevented the sale of SGARs directly to consumers at home improvement or garden supply stores, where they were once packaged and readily available for a single home’s use. The regulations intended that only pest control professionals—who, under the regulations, can still use SGARs—would buy and use the products where they were deemed necessary. However, online sales have likely influenced the effectiveness of these regulations.

Murray said one of the reasons she has continued to monitor birds of prey at Tufts Wildlife Clinic for rodenticide poisoning is to measure the effectiveness of the approach the EPA has taken to regulating SGARs in preventing exposure of wildlife species.

“If we have solid data showing these types of rodenticides are dangerous to wildlife, that can help inform people who are making decisions, whether for their own homes, for a town, or more broad regulatory decisions,” she said.

She encouraged anyone looking for pest control solutions or hiring a pest management professional to consider approaches other than ARs. Find out where the mice or rats are coming in, plug up holes in the house or around windows, take away food and water sources, and clean out nesting sites—a process referred to as an integrated pest management approach, she said. (Find more tips for solving a pest problem here.)

“There's no such thing as a safe poison, but even among the range of poisons, anticoagulant rodenticides are a category that has very significant risks to our wildlife species,” said Murray. “When the time comes for the EPA to review the regulations and see how they’re working, this research can help to inform that decision.”

In 2014, a memorial fund to support Dr. Murray’s research was established in honor of Ruby, a beloved red-tailed hawk that lived in Cambridge and died due to ingestion of a lethal amount of SGARs. To donate to the Ruby Memorial Research Fund, please contact Ana Alvarado, Cummings School senior director of development, at ana.alvarado@tufts.edu or visit: https://tuftsgiving.org/giving-form.html?id=4&appeal_code=V0750.