Books for Misanthropes—and Everyone Else

Bookish: Sulmaan Khan, Fletcher School professor of international history and author of "Haunted by Chaos," unsurprisingly is an eclectic reader 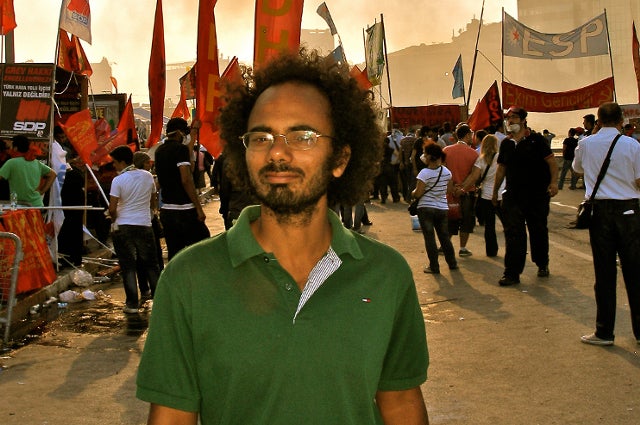 Bookish is an occasional Tufts Now series of interviews with authors from the Tufts community. For more book suggestions, see “Summer Book Recommendations.”

For anyone who has studied with Fletcher School associate professor Sulmaan Khan, it’s no surprise that he reads widely. When I took his class The Historian’s Art and Current Events last spring, he quoted off the top of his head passages from Hilary Mantel’s Wolf Hall, Thucydides’ History of the Peloponnesian War, and Mario Puzo’s The Godfather—whatever the moment called for.

The Denison Chair of History and Diplomacy, Khan focuses on international history and Chinese foreign relations. His most recent book is Haunted by Chaos: China’s Grand Strategy from Mao Zedong to Xi Jinping. His first book, from 2015, was Muslim, Trader, Nomad, Spy: China’s Cold War and the People of the Tibetan Borderlands.

Great is a term that’s been degraded through overuse, I fear. I did finally make it through Macbeth and Othello, which were the two Shakespeare tragedies I’d never been able to get into—no such troubles with Lear or Hamlet. Being older, I found them great, but I understood my impatience, too. If Shakespeare’s a cop-out, well, by date of publication, the last inarguably great book I read is probably Helen Macdonald’s H is for Hawk.

Who’s an author you would recommend that most of us wouldn’t have heard of?

Gerald Durrell. I recommended My Family and Other Animals to a friend who tried to put me onto the TV show based on it called The Durrells of Corfu or some such. The show is an overwrought travesty. The books on the other hand are pure joy: sparkling with humor and love of life.

What were your favorite books growing up?

Who says I’m done growing up? If I’m ever too old to enjoy Kipling, The Wind in the Willows, Watership Down, the occasional Enid Blyton (she was prolific), Tom Sawyer (I know it’s heretical, but it’s better than Huck Finn), Richmal Crompton, and yes, Harry Potter, it’s probably time for what Dumbledore called the “next great adventure.”

You’ve written two books centered on China. Name three that are essential reading for those interested in the country—fiction included.

I’ll settle for one: Jan Wong, Red China Blues—not just because it’s a great book on China (yes, really great), but also because of the sheer chutzpah the author shows. You need it as a journalist or a scholar or anyone interested in finding things out.

Are there books that have inspired you?

Many, for many different reasons. Off the top of my head: Hal Whitehead and Luke Rendell, The Cultural Lives of Whales and Dolphins, for showing—among many other things—how valuable an unwavering commitment to a subject can be, and Helene Hanff, 84, Charing Cross Road, for showing even as committed a misanthrope as myself that glorious friendships can emerge almost out of thin air.

What’s a book your students would be surprised to see on your shelves?

My students, bless them, have put up with my spouting annotated bibliographies at the slightest provocation, so I doubt much would surprise them. The sheer number of detective fiction volumes might do it, but they’ve been well-trained and would probably see it coming.