How Historians Shape the Teaching of History

Who gets to tell the story of the past? It’s a question that has transformed the Tufts curriculum. 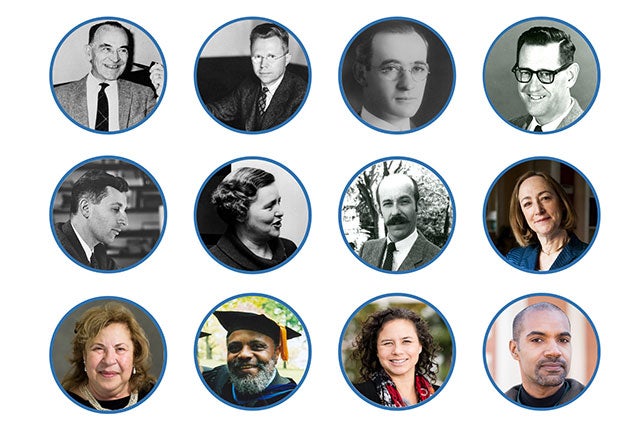 In 1950, history courses at Tufts had not changed for two decades. All five professors in the department were white Protestant men, and three of them—Albert Imlah, Ruhl Bartlett, and Halford Hoskins—were born between 1891 and 1901, during the presidencies of Grover Cleveland and William McKinley. One of the standard departmental offerings was The History of the American Frontier, a tribute to the tradition of Frederick Jackson Turner’s vision that dominated the teaching of American history. This was the America of Custer’s Last Stand, the “savage” frontier, and the unstoppable westward movement of civilization; no one was talking about Wounded Knee. Arthur Schlesinger Jr.’s The Age of Jackson, which won the Pulitzer Prize in 1945, had no mention of the Trail of Tears or the Indian Removal Act: there was a single reference to “Cherokee Indians.”

Historians at Tufts, like those at most of the higher education institutions in America, had encountered few challenges to this vision and had not expected any in the future. But by the dawn of the 1960s, their tidy universe had been disrupted—so much so that in 1962, Carl Bridenbaugh, legendary professor of American history at Brown University, used his valedictory speech as outgoing president of the American Historical Association to talk about his fears for “our very survival as a profession.”

The main problem, he believed, was that the latest crop of historians included too many “urban-bred scholars,” newcomers who lacked “a common religious and cultural bond” and thus could doom the tradition in higher education that had been shaped for centuries by Protestant rural America. “Today we must face the discouraging prospect that we all, teachers and pupils alike, have lost much of what the earlier generation possessed,” Professor Bridenbaugh lamented. In 1987, University of Chicago Professor Allan Bloom published a bestseller whose title, The Closing of the American Mind: How Higher Education Has Failed Democracy and Impoverished the Souls of Today’s Students, seemed to say it all.

Indeed, from the 1950s onward the teaching of history was changing, and in part it was because the teachers themselves were changing, just as Bridenbaugh feared. Many of these new professors who were now shaping history departments had experienced a past different from that of their predecessors—and this informed how they approached their investigations.

History is an academic discipline where memory joins with rigorous research and evidence. In Bridenbaugh’s generation, when American academics shared a set of common memories, the result was tradition and a shared past. But when the memories are different, what then?

Much of the change that Bridenbaugh found so threatening started innocently enough in 1944 with the enactment of the GI Bill, which provided modest educational benefits to WWII veterans. The upshot was that vets—some 7.8 million over the next twelve years—poured onto American campuses, often making up more than half the student body, and while they were overwhelmingly white, they were different from earlier collegians. Many were working class, the children of immigrants, or both, and the war had brought them into far more contact with people of other ethnicities than their peers on the home front were likely to have had.

Enrollments exploded, and the size of college faculties erupted. The number of faculty members in the United States, which had stood at forty-eight thousand in 1920 and had scarcely changed for the next twenty years, passed six hundred thousand a few years after the original end of GI benefits in 1956, and many of these new faculty had been the GI Bill beneficiaries themselves.

At Tufts, three new history professors in the immediate postwar era—Freeland Abbott, Russell Miller, and Aubrey Parkman—had served in the military before earning their doctorates. Then in 1961—after more than a hundred years—the department hired its first non-Protestant, George Marcopoulos, who was destined to become a Tufts legend. A former US Army lieutenant with a new PhD from Harvard, Marcopoulos belonged to the Greek Orthodox Church and was the first of his family to attend college. His parents were among the few Greek immigrants who managed to get into America despite restrictive immigration laws.

Marcopoulos soon shifted the compass of the traditional Western civilization course he inherited from Professor Imlah to the region of his Greek ancestors: the Balkans. Here was European history with a Hellenic flavor and a special memory that included the first Great Christian Schism, Islam in Europe, and the assassinations in Sarajevo: a never-to-be-forgotten view of a royal world in perpetual turmoil. It was unique to Tufts, because there was only one George Marcopoulos.

In 1963, the history department, fulfilling Professor Bridenbaugh’s fears, broke down another barrier and hired its first female professor, Nancy Roelker, a historian of France. In 1969, Dan Mulholland, from the streets of Chicago, brought a view of Soviet history never seen before on the Hill. But it was the 1970s that produced the tsunami. In 1970, with the hiring of Pierre Laurent, whose father died fighting the Nazis with the Belgian Resistance, students got a chance to see diplomatic history from an entirely different angle. In 1971, Howard Solomon became the first Jew in the history department and soon identified himself as the first openly gay faculty member at Tufts. His course Social Deviance in European History—affectionately known as “Nuts and Sluts”—lit an intellectual fire under the student body and faculty.

Howard Malchow came in 1974 to open our eyes to everything from gothic images of race in Victorian society to the new ethnicities of post-imperial Britain. In 1977, Steve Marrone arrived to shatter traditions in medieval studies, and Virginia Drachman, a historian of women and science, joined the faculty. Drachman’s interests would eventually take her from women in male-dominated professions to girlhood in the late 1950s and early ’60s, and she would develop a research seminar, Tufts in American History, that would be the first to use Tufts Digital Collections and Archives as its weekly classroom.

The first Black faculty member in the department, Gerry Gill was twice named Massachusetts Professor of the Year. He brought the history of the civil rights movement into the curriculum and attracted hordes of both white and Black students to his classes. He became the historian of Tufts and the Underground Railroad, worked with producer Henry Hampton to make the landmark television series Eyes on the Prize in the 1980s, gave enormous legitimacy to sports history as an academic discipline in unforgettable courses, and never forgot a name or a face.

In 1986, not quite twenty-five years after Professor Bridenbaugh lamented the arrival of “urban-bred scholars,” another distinguished president of the American Historical Association, Stanford’s Carl Degler, acknowledged without a trace of distress that his profession had indeed changed: “Groups and subjects ignored in traditional history suddenly became visible, clamoring for inclusion in a historical framework that once had no place for them,” he explained in his farewell address. And with inclusion came diversity and, inevitably, conflict and controversy. Old myths were challenged; evidence formerly ignored was now critically examined. The college campus was transformed into a battleground of historical memory in what became known as “the Culture Wars.” The counterattack began the next year with Allan Bloom.

There will always be historians who prefer the perspective of an earlier, more celebratory portrayal of the past. Why put American blemishes on display? Can’t we have a heroic history? One hears that yearning in the words of the former chair of the National Endowment for the Humanities Lynne Cheney: “Without the traditional American narrative, we do to ourselves what an unfriendly nation bent on our own destruction might.” Alas, history today demands tougher questions and a more thoughtful range of answers.

We are a different academic community than we were in the middle of the last century. Ayesha Jalal explores the forces that led to the creation of her native country, Pakistan. Kendra Field continues the work of Gerald Gill in examining the complex attitudes of race in America. Her family migrated to the Indian Territories in the wake of the Civil War. Kris Manjapra, born in the Bahamas, heads the new Department of Studies in Race, Colonialism, and Diaspora, which is offering a minor in Native American and Indigenous studies. These historians—along with George Marcopoulos, Howard Solomon, Leila Fawaz, Gerry Gill, Virginia Drachman, and others of their generation—have enriched as well as complicated our thinking. The old historical narratives are gone. There will be no going back.

But we will all be better historians for it.

Sol Gittleman is the Alice and Nathan Gantcher University Professor Emeritus, and a former Tufts provost.