Not Looking Away: A Focus on Genocide and Mass Atrocities 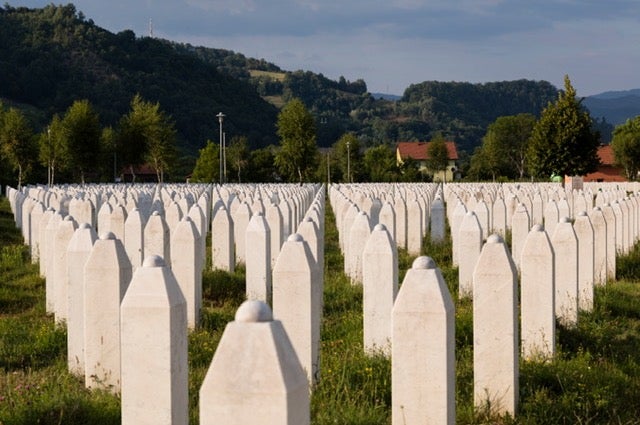 For years, reports have emerged that the Chinese government has systematically repressed the Uighurs, a minority Muslim group of Turkic origin living in the Xinjiang area of western China. At least one million Uighurs in China are in detention camps, and this summer a report offered evidence that Uighur women have been subjected to forced birth control and sterilization, drawing fresh concern and outrage from the international community.

This week, the Norris and Margery Bendetson EPIIC International Symposium will highlight the plight of the Uighurs and other persecuted groups, focusing on preventing genocide and mass atrocities.

The event is an annual forum organized by students participating in Education for Public Inquiry and International Citizenship (EPIIC), a year-long course offered through the Tufts Institute for Global Leadership (IGL). The symposium, originally scheduled for March, takes place October 9-10 and features a keynote address and panel discussions with breakout sessions, and for the first time takes place online.

“The ongoing conflicts in Syria and Myanmar, the plight of the Rohingya in Burma, and China’s actions against the Uighurs in Xinjiang are all tragic reminders of why it is still important to study and prevent genocide and mass atrocities,” says Abi Williams F85, F86, F87, director of IGL and professor of the practice of international politics at The Fletcher School. Even though “the world agrees that genocide and mass atrocities are unacceptable,” he says, they persist.

Genocide and mass atrocities are “a direct assault on universal human values,” says Williams. Atrocities force the persecuted to flee their homelands, increasing “humanitarian need, which stretches the capacities and resources of nations, of international organizations, of aid agencies, and NGOs.”

The coronavirus pandemic hasn’t helped. Victims of mass atrocities living in refugee camps are particularly vulnerable to the coronavirus. Moreover, “COVID-19 is leading to increasing xenophobia and hate speech, and some authoritarian governments are also taking advantage of the pandemic to undermine human rights,” Williams says.

The students in the 2019-2020 EPIIC colloquium began planning this symposium a year ago; Williams credits them with the event’s virtual manifestation. “They have shown remarkable adaptability and flexibility in pivoting to a virtual format,” he says.

The symposium opens with the keynote address “Why Preventing Atrocity Crime is the Highest Priority,” given by David Scheffer on Oct. 9 at noon ET. Scheffer is clinical professor emeritus at Northwestern University School of Law, and served as the UN secretary-general’s special expert on United Nations assistance to the Khmer Rouge Trials from 2012 until 2018. From 1997 to 2001, he was the United States ambassador-at-large for war crimes issues.

The symposium will feature a number of people with wide humanitarian and international experience. Among them is Theary Seng, founder of the Cambodian Center for Justice & Reconciliation and the founding president of CIVICUS: Center for Cambodian Civic Education, who will take part in the panel discussion “After Genocide: Prosecution, Transitional Justice and Reconciliation” on Oct. 10. She is the author of Daughter of the Killing Fields, her memoir of life under the Khmer Rouge regime.

Marcel Uwineza, a Jesuit priest and survivor of the 1994 Rwandan genocide, is pursuing his doctorate degree in systematic theology at Boston College. He is taking part in the panel discussion “Memory, Survival, and Genocide” on Oct. 10.

“As survivors, Marcel and Theary personify the impact that genocide has on the lives of human beings— it’s not an abstraction, ” Williams says.

Award-winning photojournalist and videographer Ziyah Gafić will also be on the “Memory, Survival, and Genocide” panel with Uwineza. Gafić’s work highlights Muslim communities throughout the world and societies stuck in a cycle of violence. Based in Sarajevo, he has covered stories in 50 countries.

“He lives in a country that also went through a genocide, and he’s using an art form to help us remember, and take preventive action,” says Williams.

The EPIIC symposium is free and open to the public. A detailed program with Zoom links is available here.

Heather Beasley Doyle is a freelance writer based in Arlington, Mass.