Taking Gene Editing to the Brain, the Immune System, and More

In a first, Tufts engineers create nanoparticles that deliver gene-editing tools to specific tissues and organs in mouse models 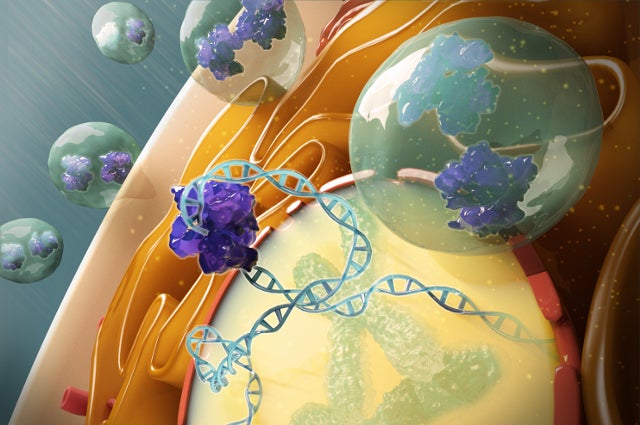 One of the most remarkable recent advances in biomedical research has been the development of highly targeted gene-editing methods such as CRISPR that can add, remove, or change a gene within a cell with great precision. The method is already being tested or used for the treatment of patients with sickle cell anemia and cancers such as multiple myeloma and liposarcoma, and today, its creators Emmanuelle Charpentier and Jennifer Doudna received the Nobel Prize in chemistry.

While gene editing is remarkably precise in finding and altering genes, there is still no way to target treatment to specific locations in the body. The treatments tested so far involve removing blood stem cells or immune system T cells  from the body to modify them, and then infusing them back into a patient to repopulate the bloodstream or reconstitute an immune response—an expensive and time-consuming process.

Building on the accomplishments of Charpentier and Doudna, Tufts researchers have for the first time devised a way to directly deliver gene-editing packages efficiently across the blood brain barrier and into specific regions of the brain, into immune system cells, or to specific tissues and organs in mouse models. These applications could open up an entirely new line of strategy in the treatment of neurological conditions, as well as cancer, infectious disease, and autoimmune diseases.

A team of Tufts biomedical engineers, led by associate professor Qiaobing Xu, sought to find a way to package the gene editing “kit” so it could be injected to do its work inside the body on targeted cells, rather than in a lab.

They used lipid nanoparticles (LNPs)—tiny “bubbles” of lipid molecules that can envelop the editing enzymes and carry them to specific cells, tissues, or organs. Lipids are molecules that include a long carbon tail, which helps give them an “oily” consistency, and a hydrophilic head, which is attracted to a watery environment.

“We created a method around tailoring the delivery package for a wide range of potential therapeutics, including gene editing,” said Qiaobing Xu.

There is also typically a nitrogen, sulfur, or oxygen-based link between the head and tail. The lipids arrange themselves around the bubble nanoparticles with the heads facing outside and the tails facing inward toward the center.

Xu’s team was able to modify the surface of these LNPs so they can eventually “stick” to certain cell types, fuse with their membranes, and release the gene-editing enzymes into the cells to do their work.

By creating a mix of different heads, tails, and linkers, the researchers can screen— first in the lab—a wide variety of candidates for their ability to form LNPs that target specific cells. The best candidates can then be tested in mouse models, and further modified chemically to optimize targeting and delivery of the gene-editing enzymes to the same cells in the mouse.

“We created a method around tailoring the delivery package for a wide range of potential therapeutics, including gene editing,” said Xu. “The methods draw upon combinatorial chemistry used by the pharmaceutical industry for designing the drugs themselves, but instead we are applying the approach to designing the components of the delivery vehicle.”

In an ingenious bit of chemical modeling, Xu and his team used a neurotransmitter at the head of some lipids to assist the particles in crossing the blood-brain barrier, which would otherwise be impermeable to molecule assemblies as large as an LNP.

The ability to safely and efficiently deliver drugs across the barrier and into the brain has been a long-standing challenge in medicine. In a first, Xu’s lab delivered an entire complex of messenger RNAs and enzymes making up the CRISPR kit into targeted areas of the brain in a living animal.

Some slight modifications to the lipid linkers and tails helped create LNPs that could deliver into the brain the small molecule antifungal drug amphotericin B (for treatment of meningitis) and a DNA fragment that binds to and shuts down the gene producing the tau protein linked to Alzheimer’s disease.

More recently, Xu and his team have created LNPs to deliver gene-editing packages into T cells in mice. T cells can help in the production of antibodies, destroy infected cells before viruses can replicate and spread, and regulate and suppress other cells of the immune system.

The LNPs they created fuse with T cells in the spleen or liver—where they typically reside—to deliver the gene-editing contents, which can then alter the molecular make-up and behavior of the T cell. It’s a first step in the process of not just training the immune system, as one might do with a vaccine, but actually engineering it to fight disease better.

Xu’s approach to editing T cell genomes is much more targeted, efficient, and likely to be safer than methods tried so far using viruses to modify their genome.

“By targeting T cells, we can tap into a branch of the immune system that has tremendous versatility in fighting off infections, protecting against cancer, and modulating inflammation and autoimmunity,” said Xu.

Xu and his team explored further the mechanism by which LNPs might find their way to their targets in the body. In experiments aimed at cells in the lungs, they found that the nanoparticles picked up specific proteins in the bloodstream after injection.

The proteins, now incorporated into the surface of the LNPs, became the main component that helped the LNPs to latch on to their target. This information could help improve the design of future delivery particles.

While these results have been demonstrated in mice, Xu cautioned that more studies and clinical trials will be needed to determine the efficacy and safety of the delivery method in humans.