Reading to Remember, Awaken, and Savor 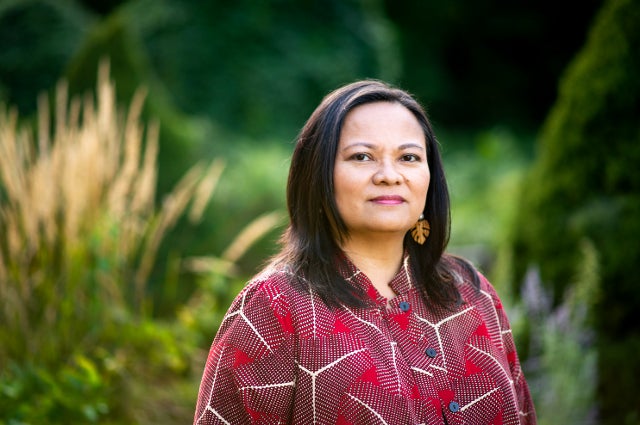 It’s been a busy time for author Grace Talusan, J94. Last year, she published her first book, The Body Papers, which recently won the Massachusetts Book Award for nonfiction; started a new position as Fannie Hurst Writer in Residence at Brandeis University; and most recently had her short story “The Book of Life and Death” chosen as the Boston Book Festival’s One City One Story, distributed widely throughout the city.

Talusan taught writing in the English department at Tufts for a number of years and continues to work with students through Tisch College. Born in the Philippines, she came to the U.S. with her parents when she was a child. That experience informs much of her work, but is certainly only one aspect of it.

“I am an immigrant, part of a tradition that people all over the world have participated in,” she says, “whether they were pushed to emigrate because of danger or poverty, or whether they were inspired to immigrate, like my parents, for safety and economic opportunities. It’s important for me to say that as a child, I was undocumented until then-President Reagan gave us a pathway to citizenship. During those precarious years as we waited, I was not separated from my parents.”

Talusan speaks at the Boston Book Festival on October 16 at 6 p.m. EDT.

Grace Talusan: Severance, a novel by Ling Ma. It’s a perfect novel to read right now even though it takes place during a global pandemic. Those who catch the fever become zombies, repeating behaviors like cooking, cleaning, or answering emails, but they are not really here.

I felt it was risky to teach it during our pandemic, but I also thought it would be important to not ignore what was happening in our lives. I was surprised how much my fiction workshop students appreciated the novel. Through the lens of fiction, we found a satisfying way to discuss and write about what we’re currently living through.

Listen to Grace Talusan talk about her favorite books, the immigrant experience, and finding time to read.

What is the last great book that you read?

Citizen: An American Lyric by Claudia Rankine. I’ve returned to it again and again because I teach from it. I’m thinking about it right now, as our attention has returned to racial reckoning, in particular police killings of unarmed Black people. I say “our attention has returned,” but my husband and extended family are Black Americans so our conversations about anti-Black racism are constant and ongoing.

There are two pages in particular that I’m drawn to, that I ask my students to pay attention to, because they’ll have different editions of Citizen. In my edition, which is the eleventh, the page that starts with, “In Memory of Jordan Russell Davis,” a teenager who was killed in Florida for playing loud music, and that line, “in memory of, in memory of,” is repeated with a list of police brutality victims.

The verso page in my edition says, “Because white men can’t police their imagination, Black men are dying.”

These particular pages show how books are dynamic and living, even after publication. This physical book changes by edition, because more names of those killed are added to this “in memory of” page: Eric Garner, Tamir Rice, Walter Scott, Freddie Gray, Sandra Bland. In my edition, it ends with Jamar Clark. And I know that later editions have more names. I wish they could stop adding names, that the killings would stop.

And you’ve taught it before, right?

Yes. Recently, I got emails from several former Tufts students who had read Citizen with me three or four years ago—they were my first-year writing students. And they told me how important this book was to them. That really touched me, to think years later, that as they were thinking about what our country was going through this past summer and having conversations about racism, that they returned to this text and our conversations about it.

Who’s an author you would recommend that most of us haven’t heard of?

I’m reading a well-known and loved poet, but because poetry isn’t that popular, I will recommend him: Jericho Brown’s The Tradition, which won the Pulitzer this year.

If you haven’t heard of him, I urge you to read him. He’s writing from the pain, history, and trauma of our country’s racial history and his particular perspective being Black and from the South. And yet there’s this insistence and attention to what’s beautiful and joyful and worth celebrating. I just am so moved by his work.

He’s invented a new poetic form, the duplex. I’m not a poet, but I think it’s a variation on the sonnet and the ghazal. And continuing that theme of violence against Black Americans, there’s his poem called “Bullet Points.” It is so powerful.

Reading poetry is different than reading fiction or nonfiction—I just plow through those books.

There’s no reason to rush through poems. For people who have a tradition of reading religious texts or scripture, you can read poems the same way. I grew up Catholic, and at church we’d listen to the gospel, one reading each Mass—that’s how I want to take in poems, slowly, one at a time.

And then I close the book of poems and say, “Oh my gosh,” and I just have to sit there with it and take it in, and then find a way to weave that poem into my conversations with different people, because it’s on my mind. It’s almost like I am proselytizing about the poem, because it’s with me.

That’s very helpful—I had never been able to really crack the idea of what to do with poetry.

My friend Joanne Diaz [J94], who I went to Tufts with, has a new podcast, Poetry For All, that might help with reading poetry. I wish I had access to it a long time ago. There’s so much poetry, that if one poet doesn’t speak to you, there’s someone else that you can read. There’s this poem, “Object Permanence” by Nicole Seeley, a love poem to her husband; it’s just the most beautiful love poem I’ve ever seen.

What books on the immigrant experience would you recommend?

Anthologies are a way to discover authors—that way, if you like what’s there, you can read more. I recommend The Penguin Book of Migration Literature, edited by Dora Ahmad, with a foreword by Edwidge Danticat. The beginning material that frames the book is really worth reading, but also it introduces you to two dozen or so writers thinking about migration, not just in the U.S. context, but all over the world.

I am an immigrant, part of a tradition that people all over the world have participated in, whether they were pushed to emigrate because of danger or poverty, or whether they were inspired to immigrate, like my parents, for safety and economic opportunities. It’s important for me to say that as a child, I was undocumented until then-President Reagan gave us a pathway to citizenship. During those precarious years as we waited, I was not separated from my parents.”

Are there other Filipino-American authors you recommend?

It’s funny, I went for much of my life in search of writers like me. I’m a longtime member of the Boston Filipino American Book Club and we have a long list of books we’ve read together. And then in the past two years, so many Filipino-Americans have put books into the world, including my cousin, Meredith Talusan, who’s an immigrant.

Her book is called Fairest, a memoir. I left the Philippines by the time she was born, a few years after me. We had missed each other in the Philippines, but in a way, she picks up the story of the family that I had left.

She’s trans and has albinism; the way that she was treated because of her complexion in the Philippines is really fascinating. She’s also super smart and raises interesting questions. For example, what is race? What is whiteness? And what does that mean depending on where you are in the world?

Were there favorite books of yours growing up?

As a young reader, I read everything that the library had of Judy Bloom and Beverly Cleary. And then it was probably Toni Morrison. My older sister, who was at New England Conservatory, took a first-year writing class with Tufts professor Morse Hamilton. He gave her Maxine Hong Kingston’s The Woman Warrior, Toni Morrison’s The Bluest Eye, and Amy Tan’s Joy Luck Club—and she gave me those books.

They led me to other writers. And I am so grateful that my mentor at Tufts, Jonathan Strong, introduced me to Lynda Barry. I’ve been reading her since I was 19. She has been so important to me as a writer. I even got to take a class with her. She posted about my book on social media which was a total dream come true. Jonathan changed my life with that one book recommendation.

How do you find time to read? This is something that I’ve struggled with.

My friend, novelist Chris Castellani [AG96], told me about his habit of reading during this pandemic. Every morning he gets up, makes himself a good cup of coffee, and before he opens email or anything, he reads Middlemarch. I thought that was so beautiful as a practice, and others in my writing group have been doing it, too.

I remembered that my grandmother did this while I was growing up, except her reading materials were the Bible, her prayer books, and her rosary. That was the first thing she did in the morning. It was her spiritual time.

And I try to do it, and it’s been great. It’s a way of feeling like I got something that I wanted out of the day. What if we could take 15 or 20 minutes of our life for ourselves when we’re fresh in the morning, and do something good for ourselves that we could remember and hold onto?