Alicia Pensarosa, VG18, puts her MAPP degree to work at Ocean Alliance as a whale researcher and educator 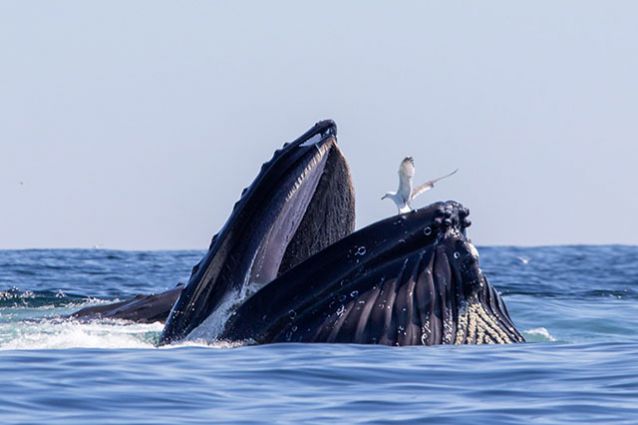 Alicia Pensarosa, VG18, studies whale snot for a living. She’s the assistant director at Ocean Alliance, a nonprofit that protects whales and the ocean through research, scientific collaboration, education, and the arts.

“Our main priority is getting people to understand why whales and the ocean are important and how to protect them, but also to study whales and be at the forefront of noninvasive health assessments so we can say this population is healthy or this one's really struggling,” said Pensarosa.

One of the Ocean Alliance’s main programs is Drones for Whale Research, which uses drones as a noninvasive way to study whales. “SnotBot is a drone with petri dishes attached. It flies over the whale, and as the whale exhales, the blow collects on the petri dishes, and we study that for microbiomes, hormones, and DNA,” she explained. 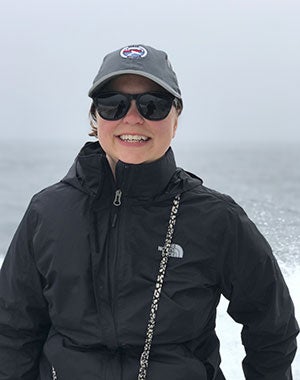 "Animal issues are such sensitive topics that having an open mind and listening to classmates’ points of view will provide you with the skills to get your point across without being too harsh," said Alicia Pensarosa of the MAPP program. Photo: Courtesy of Alicia Pensarosa
This summer, despite the COVID-19 pandemic, Pensarosa was able to continue that research in Stellwagen Bank National Marine Sanctuary, about 12 miles via boat from the Ocean Alliance headquarters in Gloucester, Massachusetts. She and her team mainly study humpback whales, which are common in the sanctuary area, but they also encounter minke whales and endangered fin whales.

The pandemic also meant there were fewer boats on water this summer, which created another opportunity: research into how reduced ocean traffic affects whale acoustics. “What does this mean for whales? Are they more talkative? Are they making more social sounds? We're doing that research in collaboration with another group of scientists and we're combining our data to see if COVID has impacted whales in a good way.”

Her team usually takes at least two expeditions outside Massachusetts each year. Earlier in 2020, before the COVID-19 travel restrictions began, they studied blue whales in Mexico. But the pandemic has put further trips on hold.

While her job of hanging out with whales sounds exciting, Pensarosa cautioned that her typical day often consists of equally important but less glamorous work, such as fundraising, grant writing, and other tasks involved in running a nonprofit organization. She credited the M.S. in Animals and Public Policy (MAPP) program at Cummings School of Veterinary Medicine for giving her the tools to do all the above.

Pensarosa enrolled in the MAPP program after more than a decade in the advertising and marketing industry. Seeking a career switch, she wanted to apply her professional skills in the area of ocean conservation, but she didn’t expect to focus on whales.

Her MAPP externship experience led her to Ocean Alliance, where she “fell in love with the mission and the team.” In a short time, she worked her way from volunteer intern to consultant to assistant director.

“It was a big change. When you go back to school after not being in school for a long time, you have to relearn how to learn. You have a little bit of imposter syndrome,” she said. “I had to relearn statistics and research methods, but that turned out to be really great. The MAPP program gave me the science foundation I needed to do this work.” 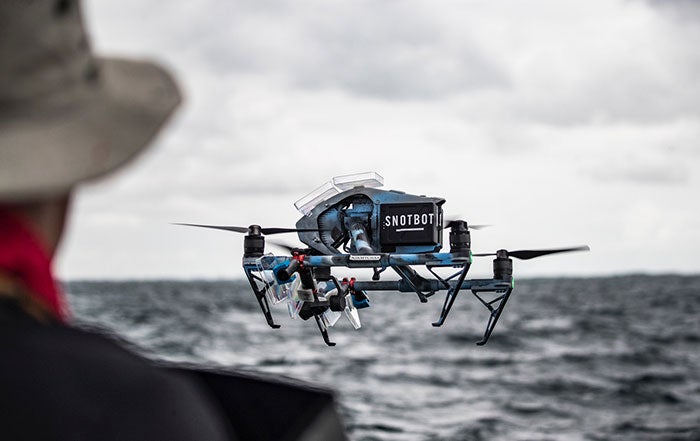 “SnotBot is a drone that flies over the whale, and as the whale exhales, the blow collects on petri dishes,” said Alicia Pensarosa, VG18. Photo: Ocean Alliance

Pensarosa has continued to engage with the MAPP program as an alum. Last summer, she hired a MAPP student, Alyssa Wile, VG19, for an externship with Ocean Alliance. Wile was expanding on research from the organization’s founder, Roger Payne, who was one of the people who discovered that humpback whales sing songs.

“Only male humpback whales sing these songs, and every male sings the same song. Over time, it changes a little bit,” said Pensarosa. “Our intern was really interested in this acoustic work. She inventoried hundreds of reel-to-reel recordings and helped write a successful grant application to apply for funding to digitize these recordings.”

Pensarosa said that the MAPP program also helps in her volunteer work as the Chairperson for the City of Gloucester Animal Advisory Committee. In this role, she meets with city officials to discuss animal matters, from opening a new area for dogs to play to, more recently, changing animal ordinances to protect an endangered species.

“Piping plovers had been nesting on one of our beaches for a few years, but they didn't have the protections they needed,” she said. “Our committee advocated for those plovers to get new ordinances in place.”

For example, litter attracts predators to the plovers, so now there are fines for littering. Nesting areas are now surrounded by a “buffer zone,” in which sports such as volleyball are not allowed.

Another new ordinance prohibits dogs on the beach during the plover nesting period. People love walking their dogs on the beach, said Pensarosa, and she had to draw on all the communications and negotiation skills taught in the MAPP program in the face of significant pushback from the community.

For anyone considering or enrolled in the MAPP program, Pensarosa has this advice: “Go into the program with a goal in mind, but don't be afraid to change and learn new things. Animal issues are such sensitive topics that having an open mind and listening to classmates’ points of view will provide you with the skills to get your point across without being too harsh. That's going to help you succeed.”