The Obesity and Cancer Metastasis Connection 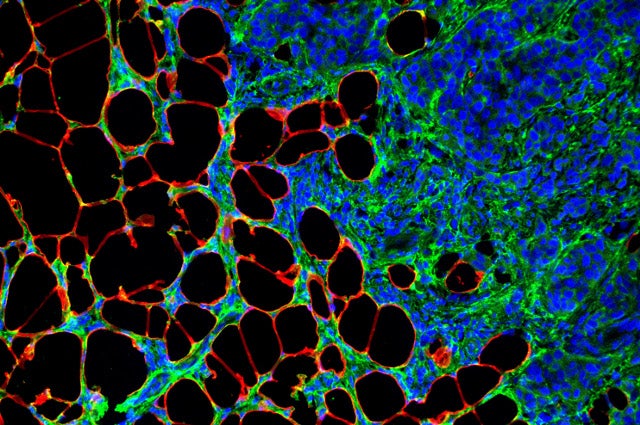 One in two men and one in three women will be diagnosed with cancer within their lifetimes. Fortunately, there has been significant progress in the treatment of a wide range of cancers, particularly when they are localized to a small area and can be removed with surgery or eliminated by treatments like chemotherapy.

In some patients, though, the tumor cells break off and invade other areas of the body—what’s called metastasis—causing widespread damage and making treatment much more difficult. In fact, 90 percent of cancer deaths are due to metastasis.

The risk of metastasis is greater in some individuals, including those who are obese. Why obesity, which affects Black Americans and Hispanic Americans more than the general population, appears to trigger metastasis at a higher rate is still not well understood.

Now Madeleine Oudin, an assistant professor of biomedical engineering, and her team at the School of Engineering have made some fascinating discoveries about metastasis and how obesity may promote it.

In a study published today in Science Advances, they have found that specific proteins in the scaffolding on which the cells grow, known as the extracellular matrix (ECM), may play an important role in triggering the invasion of cancer cells in the breast fat tissue of obese individuals. Differences in their ECM may explain why obese women have higher rates of metastasis.

“Given the worldwide prevalence of obesity and its increased risk for breast cancer development, it is remarkable that we have had limited understanding of the role of ECM plays within breast fat tissue to facilitate metastasis,” said Andrew Greenberg, director of the Obesity and Metabolism Team at the Jean Mayer USDA Human Nutrition Research Center on Aging at Tufts, who is a collaborator on this study. “This research is beginning to dissect the molecular origins of that link.” 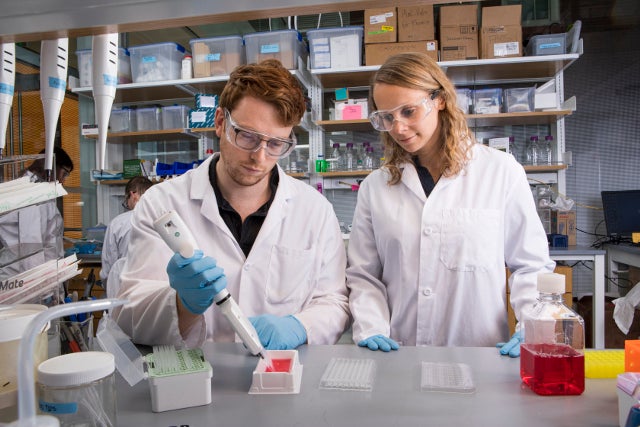 “There is still so much we don’t understand about how the ECM contributes to disease, but we are working to change that,” said Madeleine Oudin, here with Andrew Wishart in 2018. Photo: Alonso Nichols
The ECM has long been suspected of engaging in a back-and-forth response to cancer growth, in which the cancer cells induce changes in the ECM, which in turn create an environment that supports further growth of the tumor. ECM is a complex mix of collagen, elastins, fibronectin, enzymes, laminins, and other glycoproteins, but in obesity, the amount and composition of those components change, leading to fibrosis. The molecular scaffolding for tumors in obese patients is very different than in lean patients.

The Oudin lab developed a novel method to study the effects of the ECM on cancer cells. Specifically, they took mammary tissue from obese and lean mouse models, as well as tumor-bearing mice and stripped them of cells to obtain a complete, but “empty” ECM. The process is similar to the way sea sponges can be stripped of cells, leaving just their extracellular matrix to create a bath sponge. In fact, the researchers refer to the empty ECMs as “sponges.”

They then added tumor cells of triple negative breast cancer—a particularly difficult cancer to treat—derived from mice back into the ECM sponge to see its effects on the tumor cells.

They found that both ECM from the obese and tumor-bearing mice are equally effective at making tumor cells more metastatic. The ECM from lean mice, though, were less so. In other words, the ECM from obese mice acts as if it has already been primed with a tumor, and is ready to promote metastasis at a much earlier stage.

“The key advantage of this method is that we can observe cancer cells interacting with the ECM naturally generated in tissues, which is much more accurate than if we had formed the ECM synthetically in the lab,” says Andrew Wishart, former research technician in Oudin’s lab and lead author of the study, who is now at Jackson Laboratory. “Once you find an interesting interaction you can then tease apart the molecular changes in the ECM to find out which proteins could be driving that response.”

By looking at the changes in the ECM linked to invasive tumor behavior, Oudin and her colleagues zeroed in on the protein, Collagen VI.

The discovery might help point to new drug targets for cancer, and it is just the beginning of a more complete inventory of the biological mechanisms leading to metastasis, said Oudin.

“There is still so much we don’t understand about how the ECM contributes to disease, but we are working to change that,” said Oudin. “We are now developing ways to use the ECM to help predict the metastatic potential of tumors, or to deliver drugs directly to the most aggressive cells in the populations most affected by obesity and cancer.”