Improving the Odds of Surviving Lymphoma 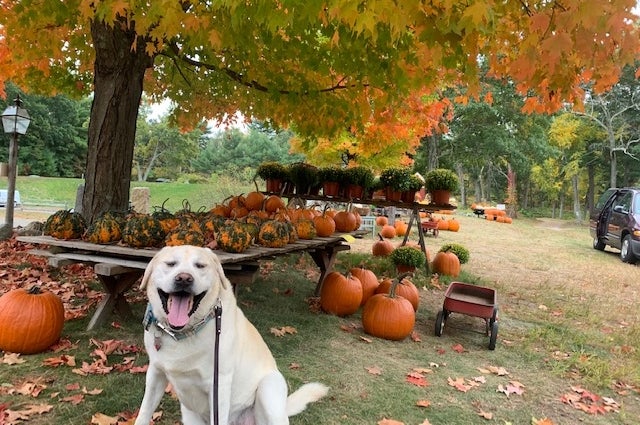 A 7-year-old yellow English Lab, Jake is a “big goofy guy with a giant smile,” said his owner, Danielle Sweder of Marlborough, Mass. “He’s always happy and loves to eat, play, and spread joy to others with his infectious enthusiasm.”

Jake seemed as plucky and healthy as ever at his annual exam in May, but his veterinarian decided to do a biopsy after noticing some telltale thickening around the Lab’s neck. The test revealed devastating news: Jake had B-cell lymphoma.

One of the most common cancers in dogs, lymphoma is a cancer of white blood cells called lymphocytes that normally help protect against infection. The lymphoma cells typically accumulate in the lymph glands (also called nodes) and other organs that are part of the immune system (such as the spleen), causing rapid enlargement. In most dogs, many lymph nodes are involved across the body. This was the case for Jake, who had enlarged lymph nodes across his whole body.

In general, dogs with lymphoma tend to survive a very short period of time without treatment—only around two to three months.  However, lymphoma is a type of cancer that usually responds well to chemotherapy. The standard chemotherapy treatment regimen—CHOP, an acronym for 4 different drugs that are used—can extend that survival time for most dogs to 10 to 14 months.

When Sweder met with an oncologist at the Foster Hospital for Small Animals, she learned about an encouraging new treatment option. Jake qualified for a clinical trial studying an experimental therapy that helps to activate the immune system to kill lymphoma cells in dogs.

In Search of a Less Toxic Treatment

Intensive chemotherapy can carry significant side effects for both pets and people, said Cheryl London, V90, the Anne Engen and Dusty Professor in Comparative Oncology at Cummings School of Veterinary Medicine.

To find out, London began a trial testing the efficacy of varying doses of a new immunotherapy. When avoiding chemotherapy altogether did not appear to help these canine cancer patients, London amended the trial, combing immunotherapy with a low dose of doxorubicin, a chemotherapy agent that when used alone extends median survival time in dogs with B cell lymphoma by about six months. Sweder chose to enroll Jake in the trial in June.

He went into remission almost immediately.

The combination of drugs “has been amazing for him,” Sweder said. “He has been acting like his happy self pretty much all the way through treatment. In a world that’s been full of bad news lately, it has just been a blessing.”

Although London cautions that the number of patients treated is still small, she’s encouraged by the results she has seen in dogs like Jake.

“Our goal was to be as good as CHOP—to minimize the chemo and get to the same outcome, if not better,” London said. “We’re definitely there, using minimal chemotherapy regimens, essentially eliminating the toxicity of treatment.”

Some patients have no response and end up dropping out of the trial shortly after starting—at which point their owners can decide to try treatment with CHOP instead. But “that’s a small percentage of the patients in this trial, probably 10 to 15 percent,” said London.

“The remainder of dogs we treated seem to be long-term survivors,” she said. Though they are likely outliers, some dogs in the trial are now 300 to 600 days post diagnosis.

London has also been encouraged to see that, among the dogs that responded to the therapy but later saw their cancer return, most quickly went back into remission when re-treated with another low dose of chemotherapy. “There’s something really unique about this approach to treatment. Some dogs can get a whiff of chemo and go right back into remission.”

She hopes that her research may mean more pets have access to cancer care—something only about a quarter of dogs with cancer ever get. Unlike the typical CHOP treatment regimen—which entails weekly visits for chemotherapy administration, often in the setting of a specialty hospital—the experimental regimen uses far less injectable chemo in combination with oral medications that are given at home. This potentially means that more pet owners could have access to treatment in the future.

A Pathway to Better Treatments in People

The clinical trial—which was funded by part of a five-year, $2.5 million grant from the National Cancer Institute of the National Institutes of Health through the Cancer Moonshot initiative—ultimately seeks to inform better therapies for people with cancer.

By doing the study in dogs whose owners have voluntarily chosen an experimental way to fight lymphoma, veterinary researchers may reveal a better approach than that currently used in people.

It would be “extraordinarily challenging” to study a novel treatment approach such as this one in people newly diagnosed with B-cell lymphoma, London said. That’s because the CHOP regimen, which is now combined with an antibody (rituximab, or R-CHOP), is the mainstay of care for human patients cures about 50 to 60 percent of them.

“With that many long-term survivors and people in the population doing well on an anchor regimen, you typically don’t just change it,” she said. So without the canine lymphoma patients’ help, “we are unlikely to ever learn if there may be a less toxic way to treat people.”

The dogs in the clinical trial at Cummings School may provide more evidence of the value of combining chemotherapy with immunotherapy to improve not just treatment outcomes, but also quality of life for cancer survivors.

“Long-term cancer survivorship is a great advance for all of us, but often it comes with a whole host of other issues in human patients, including risk of heart disease, neuropathy, and cognitive dysfunction,” said London. “Particularly for pediatric cancers, where chemotherapy now cures a lot of kids, we need to go a step beyond curing children to also relieving them of the burden of long-term side effects from treatment.”

Cindy Cornwall of Franklin, Mass., said she’s thankful to have had the opportunity to aid that effort. She enrolled her dog, Zoey, in the clinical trial after the 3-year-old Corgi-Lab mix was diagnosed with lymphoma last November.

Zoey went into remission, kept her good energy and appetite throughout treatment, and so far has remained cancer-free, said Cornwall. “Even if Zoey does end up having a relapse, I’m just grateful for the extra time we’ve had with her, and that she can contribute to science.”

Hope for Dogs with Bone Cancer

Catching Every Cancer Cell While in Surgery