Tufts computer scientists work with other researchers to understand how coral live, grow, and survive threats 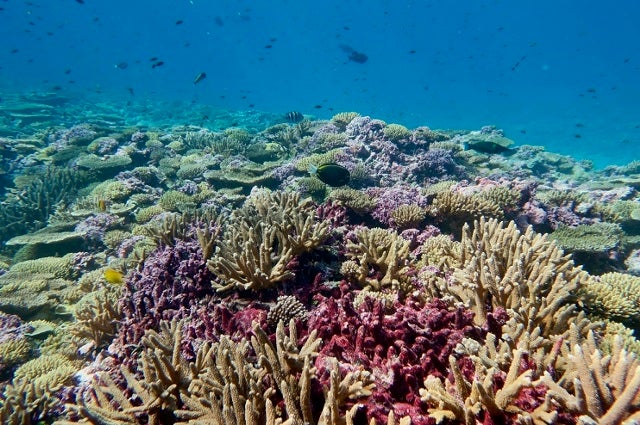 Coral reefs are home to a quarter of all the oceans’ fish, and are vital to the health of the ocean ecosystems that half a billion people rely on for food, income, and protection along shorelines. But they are increasingly under attack.

Massive coral bleaching has been occurring worldwide, as warmer than normal ocean water and increasing ocean acidification—both consequences of climate change—push many coral reefs close to death. Coral bleaching occurs when the reef-building coral animal ejects the symbiotic algae that give the corals their color and produce essential nutrients that the coral needs to survive. By some estimates, half of all coral in the world’s oceans has died in the last 30 years.

Finding a way to help the coral survive is at the heart of a National Science Foundation-funded project co-led by Lenore Cowen, a professor of computer science. She and researchers from four other universities are part of an interdisciplinary team trying to use data science methods to understand the exact factors that determine whether corals will be more or less resilient to stresses caused by climate change.

The researchers are taking a multi-disciplinary approach: using emerging bioinformatics data together with classical measures of coral health to understand differences across coral, and testing their hypotheses in laboratory conditions.

“Can we learn something in the laboratory that will help us understand coral better and maybe eventually intervene? That’s the question,” says Cowen, who focuses on computational biology— using data to develop algorithms or models to understand biological systems—in her research. 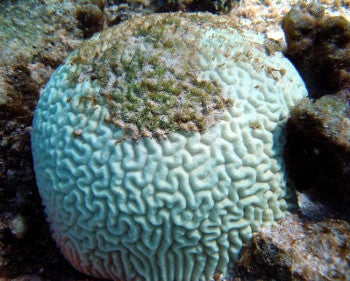 Bleached brain coral. Photo: NOAA
Coral bleaching is the most vivid example of the destruction facing coral. “When the system goes out of balance, and the animal expels the algae, it turns white and bleaches,” said Cowen. If it recovers quickly, it can take back the symbionts—the organisms that it cooperatively lives with—and recover. “But if it doesn’t recover quickly, then bad things come into the ecosystem that are not as friendly to life.”

Along with experts in coral, systems biology, structural engineering, and nanotoxicology, Cowen is seeking first to work out what’s happening with coral at the molecular level. “I’m trying to understand the important genes and proteins involved in coral reactions to light, sound, and stimulus, as well as figure out the genes and proteins involved in biomineralization, growth, wound healing, and symbiosis,” she says.

The project involves five interdisciplinary labs across the country, which generate tremendous amounts of data, all of which needs to be analyzed. “I’m the only one on the team who isn’t growing corals in a wet lab. My goal is to be sort of the octopus at the center who is managing and trying to make sense of all the big data,” says Cowen.

Assisting her is Monsurat Olaosebikan, a Tufts doctoral student in computer science, who is working on creating virtual reality (VR) and augmented reality (AR) environments for sharing data on coral, allowing scientists to collaboratively view and annotate data in real time from different locations.

“We’re also looking into exploring how we could create AR glasses for divers to identify corals, for example,” says Olaosebikan. “It’s kind of a mix of things—how can we use immersion to make scientific discovery easier and more efficient, and generalizable to other research?”

The National Science Foundation (NSF), which is seeking to create more interdisciplinary teams to tackle complex problems, invited an array of scientists—including Cowen—to a week-long event in spring 2019 to brainstorm new topics to research that would harness emerging data sets and novel data science analysis methods. 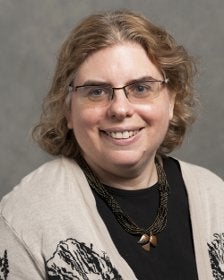 “Can we learn something in the laboratory that will help us understand coral better and maybe eventually intervene? That’s the question,” says Lenore Cowen.
“When I looked at the people in the room, I decided—out of the blue—that I want to work on corals,” says Cowen. Saving the corals seemed to be a compelling crisis that she could work on with biologists and material scientists.

“We made the analogy that a coral is like a living 3D printer, that prints its own house, with little waste,” Cowen says. “Material scientists have an amazing, also very data-driven toolbox to study resilience of materials that translate well to living materials as well.”

She joined forces with two biologists and a materials scientist from the Colorado School of Mines, Virginia Commonwealth University, and University of Washington at the meeting, and called Hollie Putnam, a coral expert at the University of Rhode Island, to ask if she would join them. Putnam agreed, and they ended up with a two-year, $1.7 million NSF grant, and got to work right away.

“The complexity of corals makes conserving and restoring reefs very challenging,” says Putnam. Corals are “more like cities than individual animals, as they provide factories, housing, restaurants, nurseries . . . for an entire ecosystem. Everything found on a reef is there because corals build the reef structure.”

The team is collecting data in many different areas and hopes to figure out ways to help coral survive worldwide.

“We’re at a tipping point,” Putnam says. “We have data that will lead us to a better understanding of the coral ecosystem, but we need to harness these data in a different way. And we’re at a time of urgency because of the state that our corals are in.”