It can be hard to make new friends as an adult, and a new study by Zarin Machanda, a primatologist and anthropologist at Tufts, shows this is as true for chimpanzees as for humans.

Instead of making new friends, older people focus on their existing friends. And, although there’s a stereotype that people are less happy as they get older, the data show a shift toward positive behavior.

“For human psychologists, the explanation is that humans have a sense of mortality and a sense of future time, and they make this shift because they know they don’t have time to waste,” Machanda said. It’s called socioemotional selectivity theory.

Machanda directs long-term research at the Kibale Chimpanzee Project, a field site in Kibale National Park in Uganda. For 33 years, researchers have gathered data every single day on a group of 50 to 60 chimps.

One day, Machanda’s friend and colleague, Alexandra G. Rosati, a psychologist and anthropologist at the University of Michigan, suggested that the data could be used to test socioemotional selectivity theory in chimpanzees, to see how their social behavior changes as they age, given that chimps are not known to have a sense of future time.

She and the other authors of the study, recently published in the journal Science, combed through decades of data to calculate grooming rates, aggression rates, and other social patterns. They found that male chimpanzees, similar to humans, invest in strong mutual bonds as they get older and show a shift toward positive behavior. This was true even though chimps are not known to have a sense of future time.

“What you see with chimps as they age is a decline in rank, but they’re actually quite popular individuals. Others want to be near them and spend time with them,” Machanda said. “This may be an adaptive strategy—even though they lose their fighting ability, by maintaining strong social bonds, they’re able to gain reproductive success and still be productive members of the community.”

Machanda wanted to make one thing clear: the chimps are not decrepit, old individuals. “It’s an interesting strategy: even though they’re losing rank, they’re compensating for it by living their best lives.”

A Treasure Trove of Data 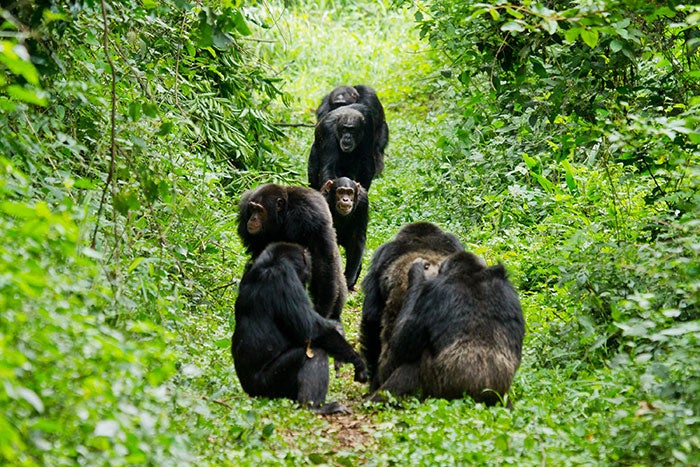 A group of male chimpanzees approached another group of chimpanzees grooming together in Kibale National Park in Uganda. Photo: Ronan Donovan

Machanda has so much data on chimpanzees that she can answer almost anything you’d ever want to know about them.

“Name something you might find interesting about chimps, and we probably are studying it, have studied it, or could study it,” she said.

The Kibale Chimpanzee Project’s large research team includes a group of Ugandan field assistants who follow the chimps from early morning to nightfall, noting every move, every interaction. Those handwritten notes are sent to Machanda’s lab at Tufts, where she and her students turn them into data that can be quantified and analyzed.

“This incredible data set is unlike anything you would find in human studies,” Machanda said. “There are very few, if any, human studies where you have minute-by-minute observations of everything the animals are doing.”

Her research centers on why and how chimpanzees form relationships and social bonds, and how those relationships develop from infancy through adulthood and into old age. (Some of the chimps Machanda studies are now well into their 50s and 60s.)

Sometimes it’s hard to tell the babies apart when they’re tumbling around in a play group or being held tightly by their moms, but she said they can tell the moms apart, which makes it easier. Machanda described an adult male chimp named Makoko as an example. “He has this patch of hair that grows in a weird direction on his right shoulder,” she said. “So even from behind, you know that’s Makoko.”

Researchers normally stay at least 25 feet away from the chimpanzees as they observe the animals. But in this time of COVID-19, they’ve increased that distance. As one of our closest living animal relatives, chimpanzees are quite susceptible to human diseases and have been shown to be able to be infected by coronaviruses, though Machanda said there’s no evidence yet that any apes have gotten COVID-19. The project staff also were quarantined at the field site with no outsiders allowed.

“Our first priority is always the health and safety of our staff and the chimps. We would much rather have the chimps survive this pandemic than have more data on them,” Machanda said. “One of the things about our research is that we have three plus decades of data. If we never got more data, we’d still have full careers analyzing what we have,” she said. “Not that I want to stop collecting data, because we’re always seeing new and exciting things.”

Solving the Riddle of One Virus, Two Coasts, and Thousands of Seals