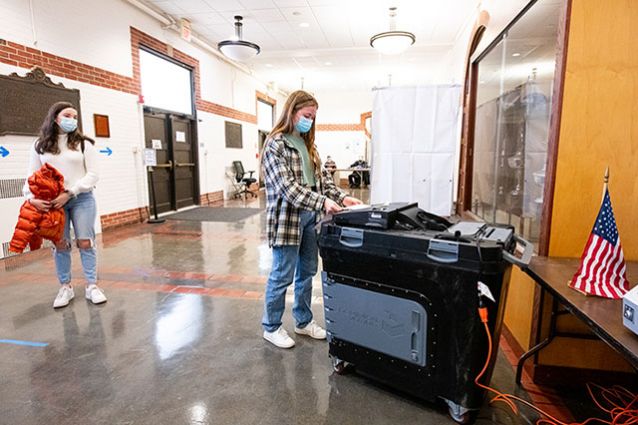 President-elect Joseph R. Biden Jr. has plenty of people to thank for his election win over incumbent President Donald Trump. But voting data shows he should be especially grateful for the support of young voters—in particular, young voters of color.

Nationwide, 61 percent of 18- to 29-year-olds voted for Biden, while 36 percent voted for Trump, according to analysis from the Center for Information & Research on Civic Learning and Engagement (CIRCLE), the non-partisan research center on youth engagement at Tufts University’s Jonathan M. Tisch College of Civic Life. That’s higher than the level of youth support Hillary Clinton received from young voters in 2016. About half of eligible 18- to 29-year-olds voted, and CIRCLE projects that could rise to 56 percent when all votes are counted.

“During this election cycle, as young people are raising their voices, advocating for change, and voting in historic numbers, CIRCLE’s research has provided the essential data and analyses that help us all see and understand the importance of young people to our nation’s civic life and their impact on the future of our democracy,” said Alan D. Solomont, A70, A08P, the Pierre and Pamela Omidyar Dean of Tisch College of Civic Life.

In four key states—Arizona, Michigan, Georgia, and Pennsylvania—youth voters favored Biden over Trump by a margin of more than 100,000 votes in each of those battleground states. A deeper dive into CIRCLE’s data reveals more striking points.

Of Michigan voters ages 18 to 29, 62 percent chose Biden and 35 percent went for Trump, giving Biden an edge of about 194,000 youth votes—higher than the 148,000-vote margin of victory in the state. About 77 percent of Michigan’s young voters of color cast ballots for Biden.

“Young people’s activism, participation, and leadership in this election have been historic, with young people of color playing an especially critical role,” said Kei Kawashima-Ginsberg, Director of Tisch College’s CIRCLE. “Our data reveal that youth cast more than 10 million early and absentee ballots, and possibly upwards of 25 million ballots in total, turning out at a higher rate than in recent elections.”

Many young voters cited the negative effects of the COVID-19 pandemic as a reason for their decision. A CIRCLE analysis found that more than half (52 percent) of 18- to 29-year-olds said they or someone in their home lost a job or had reduced pay due to COVID-19. Those voters favored Biden by a 33-point margin.

About one out of five young people said they’ve lost a friend or family member to the virus, and that number is higher among youth of color, whose communities have suffered more case numbers and deaths from COVID-19 than white communities. Support for Biden was even higher among young voters who know someone who died of COVID-19.

“Even at this time of so much uncertainty, when the nation is confronting a pandemic, widespread economic hardship, and systemic racism, young people voted in large numbers across the country—and powered the Biden-Harris ticket to victory,” said Kawashima-Ginsberg.

Voters ages 18-29 also worried about interference from other countries in this election, CIRCLE’s analysis showed. About 44 percent of youth voters of color said they were “very concerned” that this interference would affect the presidential election results.

However, young voters were more optimistic about other parts of the electoral process. More than three out of four young people said they were somewhat or very confident that eligible voters would be allowed to cast a ballot, and those voters were similarly confident that voter fraud would not be an issue.

In the coming weeks and months, CIRCLE will continue to provide in-depth analysis of youth engagement in the 2020 election and beyond. You can stay up-to-date by following their web site and social media channels, or by signing up for their monthly newsletter.