An Inuit Voice in the Arctic 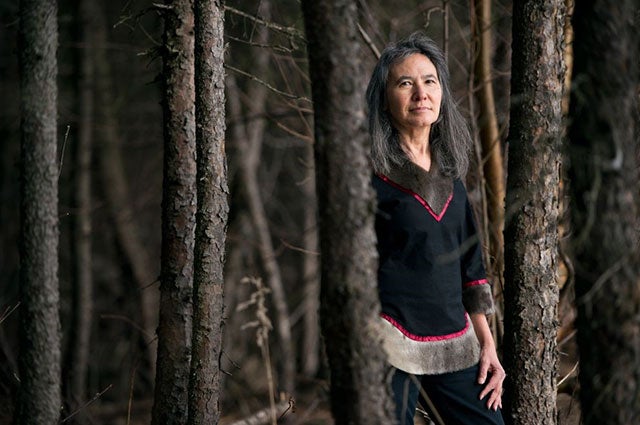 In photos, Canada’s Mackenzie River Delta looks idyllic, “like everything is fine,” said Dalee Sambo Dorough, F91, speaking recently from her Anchorage office. But surface appearances can be deceiving when it comes to the network of waterways and islands in the far north, where the ground is frozen 300 feet deep year-round. “You can’t see the carbon emissions that are being generated by the failing permafrost.”

That thawing permafrost is just one of the damaging consequences of climate change that Dalee and other Inuit know firsthand. From vast stretches of northern land in present-day Canada, Greenland, the Russian Far East, and Alaska, to the Arctic Ocean and surrounding swaths of sea ice, these Indigenous communities are linked genetically and culturally despite geographic diversity and geopolitical divisions. They are not only threatened by climate change, Dorough said; their knowledge makes them indispensable in the fight against it.

“We need to intervene with Indigenous knowledge, to be a part of the geopolitical discussion,” said Dorough. “We need to play a direct role and have a seat at the table.” As chair of the Inuit Circumpolar Council (ICC), an international non-governmental organization that represents the approximately 180,000 Inuit living across the circumpolar Arctic region, Dorough’s job is to occupy that seat.

Dorough is warm and friendly, with a diplomatic demeanor cultivated over a lifetime of civic engagement. She was born into the movement for Indigenous rights. Her parents hailed from Unalakleet, an Inuit village in the Bering Strait region—but she grew up in Anchorage surrounded by politicians, part of the only Alaska Native household in a white neighborhood.

Her childhood was marked by political upheaval, with President Kennedy’s assassination, the passage of the Alaska Native Claims Settlement Act of 1971, and the construction of the Trans-Alaska Pipleline. “There were so many changes facing Alaska and our people,” Dorough said. “My awareness was centered on how much things were going to change for my parents and grandparents. Whole communities. You won’t be surprised to know that racism was a factor as well.”

These forces provoked Dorough’s early dive into politics. In high school, she organized an independent study working for Inuit politician Eben Hopson in his bid to unseat Alaska Congressman Don Young. (The Republican incumbent, who ultimately prevailed, has been in office for Dorough’s entire life.)

That political campaign propelled her into roles with the ICC, which Hopson founded in 1977. She remained at the organization throughout the 1980s—another pivotal time. She was part of the Alaskan tribal sovereignty movement, and helped shape the norms that would later become the U.N. Declaration on the Rights of Indigenous Peoples. Understanding that an advanced degree could help her advocate for Inuit on the international stage, Dorough applied to Fletcher, The Graduate School of Global Affairs at Tufts, and moved to Boston in 1989.

It was a dramatic change. While her Fletcher classmates hailed from around the world, Dorough was, to her knowledge, the first self-identifying Indigenous person to have enrolled in the school. (University records suggest this to be true.) Lively discussions in and out of the classroom prepared Dorough for her work in international relations and helped her refine the arguments she’d been making about the significance of Indigenous people’s human rights. “I had to be assertive about the points of view of my own people, as well as other Indigenous peoples,” she recalled.

Her commitment to those points of view—specifically, to the notion that Inuit are distinct peoples with human rights under international law—has never wavered. After graduation, she worked with the Alaska Inter-Tribal Council and directed the International Union of Circumpolar Health. She earned a doctorate at the University of British Columbia Faculty of Law and became an assistant professor in political science at the University of Alaska Anchorage. In 2018, the ICC elected her as chair of the organization.

Dorough now represents Inuit on the international stage, including at numerous bodies of the United Nations. She works to advance the ICC’s goals, which range from promoting food security and health, to revitalizing native languages and culture, to protecting the integrity of the Arctic environment.

Her Fletcher education still proves useful. Dorough recalls writing a paper about the ownership of sea ice in a course with the late professor Keith Highet “That paper was directly related to the work I do now,” she said. “If you think about the current debate and discussion with regard to climate change and its impacts in the Arctic, having a grounding at Fletcher was really important.”

Her professors admired her determination. “I first met Dalee in Geneva, before she had enrolled at Fletcher, and I was immediately impressed by her commitment to the cause of Indigenous rights,” said Professor of International Law Emeritus Hurst Hannum. “She is an excellent politician, in the best sense of the word. Gaining respect within the Indigenous movement requires years of working with others for shared goals, and Dalee's ability to do that has made her leadership and impact possible.”

Dorough also draws from her Inuit worldview, understanding the interconnectedness of global challenges. At the onset of COVID-19, for example, community leaders mobilized to shut down outside access to remote Inuit villages in Alaska. It was largely successful. But spikes occurred among those who traveled to urban areas for medical care, and in communities in contact with outside industries like commercial salmon fishing.

“The people who drive these economic activities have not taken into account the potential adverse impacts on our people,” Dorough said—adding that this same issue drives climate change. “More often than not, actions and decisions, especially in the economic sphere, are driven by the short-term capturing of dollars.”

After thousands of years surviving in the challenging Arctic landscape, Inuit take a longer view. Dorough knows that their knowledge—from expertise in hunting and harvesting passed through generations, to a nuanced knowledge of ice and snow built into language—must inform the dialogue. “The Arctic is critical to the entire globe,” she said. “We need to ensure that there will always be Inuit, that we will always be here.”

How do I start a perennial garden?