Tufts’ Fall Festival of Plays Reinvents Theater for the Pandemic 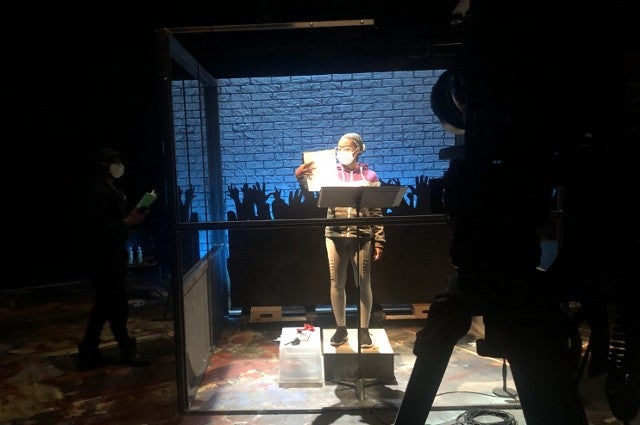 Noirret Francis stepped inside the freshly sanitized clear plastic booth in the middle of Balch Arena Theater, a smartphone camera facing her, the panel behind her painted to resemble a blue brick wall. She waited nervously—this was her first time acting—as technicians checked the lighting and audio levels.

Eventually, cued by director Maurice Emmanuel Parent, she launched into a monologue about a frightening encounter with police from the play Hands Up: Seven Playwrights, Seven Testaments.

“I was the first act of the day being filmed—so I was the person they did all the testing of lighting on, standing in this box and everyone just staring at you,” said Francis, A24. But it came off without a hitch, as she and three other students performed in the same booth, one following the other—with plenty of sanitizing in between.

The video was edited, and the staged reading streamed for a week in late October and early November—the first of three productions that made up the Fall Festival of Plays, each production streamed for a week. (The final production, Smart People, is still available for viewing on Nov. 19; go here to access it.) 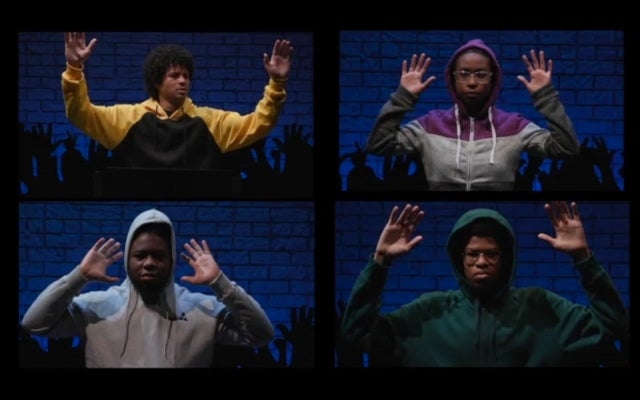 Clockwise from top left, from “Hands Up”: Andre Cleaver (stage name Dre Vivero), Noirret Francis, John Waller, and Cheonan Kougba
It wasn’t supposed to be like this, of course. Parent, who is a professor of the practice in the Department of Theatre, Dance, and Performance Studies, was originally going to put on the play Spring Awakening. Rights had been secured and plans were made.

But then the pandemic struck, and at the same time, Americans across the country were reckoning with racism. “The biggest priority,” said Parent, “was how do we respond to the pandemic of COVID-19 by making the productions safe, and address the persistence of systemic racism and anti-Black racism in our society?”

The pandemic required a different approach to theater. Zoom readings were a popular alternative at first, but were soon overdone—and never terribly engaging, Parent said.

He wanted something that could be done safely without masks, and soon Ted Simpson, senior lecturer and head of design, came up with the idea of using clear plastic booths in the theater to record actors live on video. Three sides of each booth are transparent, and the back is removable, so different backdrops can be used; it looks like actors are all on the same set. Tufts director of infection control Michael Jordan reviewed and approved the plans, and soon the team got to work.

Choosing the alternative to Spring Awakening was next. “Being a black male theater practitioner and maker, I wanted to also think of ways I can engage students of color, particularly African-American and Black students,” said Parent. He decided on three contemporary works: Hands Up: Seven Playwrights, Seven Testimonials, written in response to the protests in Ferguson, Mo.; God of Carnage by Yazmina Reza; and Smart People by Lydia R. Diamond.

He also decided that the actors should have the script in hand, so there wouldn’t be any pressure to memorize on top of all the other work the students were doing. That meant it was possible to invite students with little or no background in acting, he said. 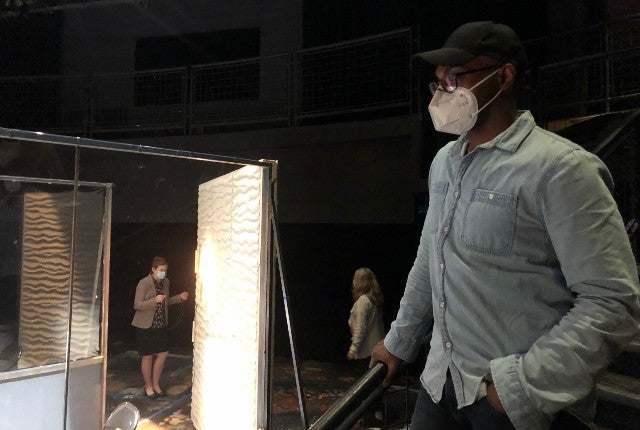 “I think the hearts and the messages of the plays are getting out there, which is what I wanted,” said Maurice Emmanuel Parent, here overseeing one of the productions at Balch Arena. Photo: Allie Humenuk

He held Zoom auditions and reached out to a wider network than usual to come up with the cast of 12 students, four for each production. They staggered rehearsals and taping for the shows.

“There’s been a steep learning curve, but it’s also been fun and exciting, because all of us are just so excited that we get to work on something,” said Parent of the long days rehearsing and then filming. “It’s one of those stressful, tiring things that’s so rewarding.”

For someone who’s worked in theater, this new approach required some adjusting. “It is a weird marriage of making theater and making a movie, because it’s not either one completely,” he said.

Amari Dennis, A21, a drama major who’s focusing on design, was acting for the first time this fall. Even though the Zoom rehearsals made it harder to get to know everyone, “I really began to cherish and enjoy the people who were on the call with me,” she said.

It was still possible, just like in a regular rehearsal, “to get notes from Maurice on how to deepen our feelings of the character, through choosing the action our character wanted to get across in the scene, even if we were just reading it,” said Dennis.

The first production was Hands Up, a series of monologues. The crew used only one camera, and learned from that experience for the next play, God of Carnage, which used four cameras shooting from different angles at the same time. The final production was Smart People, a two-and-a-half-hour play that normally has breaks and an intermission, which required even more planning. 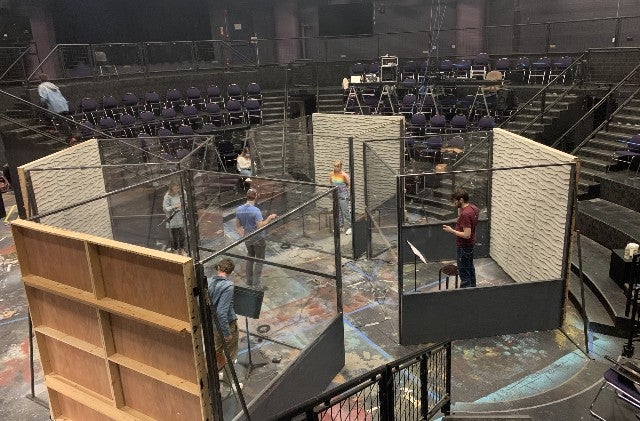 Getting the Message Out

Performing in the plays was a powerful experience, the actors said. “I felt seen when I performed my two monologues,” said Andre Cleaver, a Ph.D. student in engineering, of his work on Hands Up.

“‘How I Feel’ by Dennis A. Allen II was the most powerful piece I’ve ever performed,” he said. “The message of the piece deeply resonated with me because in most ways the monologue encapsulated my feelings about being Black in America. Those feelings have greatly intensified over the past several months because of the BLM movement and protests on police brutality.”

First-year student Francis, who also performed in Hands Up, was concerned about portraying her character “with the authenticity that she deserved,” she said. “I’ve been lucky enough in my life where I haven’t had to deal with these struggles, but I’m incredibly aware that many people who look like me do have to grapple with this double consciousness.”

After the long process of Zoom auditions and rehearsals, finally getting into Balch Arena Theater and getting down to work was the perfect antidote to isolation, said Parent. “It was very emotional,” he said. “There’s no audience—and audience is the crucial thing about theater—but to be able to collaborate in the same space, have actual conversations, laugh and joke…I can’t even describe the feeling.” 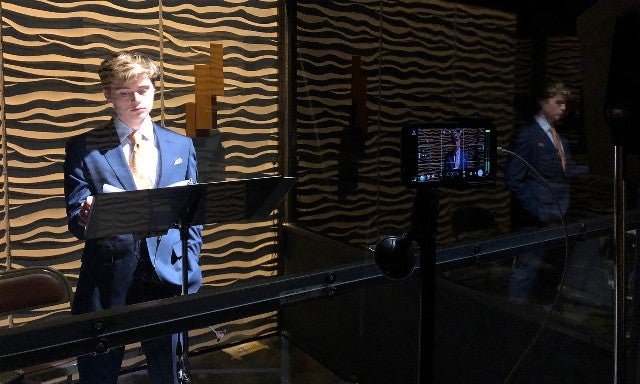 Scott Morris, A24, being recorded on the “God of Carnage” set at Balch Arena Theater. Photo: Rachel Prull
It was striking seeing others in person, added Dennis. “It was just weird to see them not through a pixelated computer screen,” she said.

At the same time, it somehow was a pure theater experience. “I think what surprised me most that it was still a full production and it was still acting, even if you hadn’t memorized all of your lines,” said Dennis. “You still had to transform.”

There’s also the deep satisfaction of putting on productions that address crucial societal issues. “I think the hearts and the messages of the plays are getting out there, which is what I wanted,” said Parent.

The students made all the difference, he added. “They’re just working so hard,” he said. “They have such great spirit—and it really would not work if they didn’t have that spirit.”