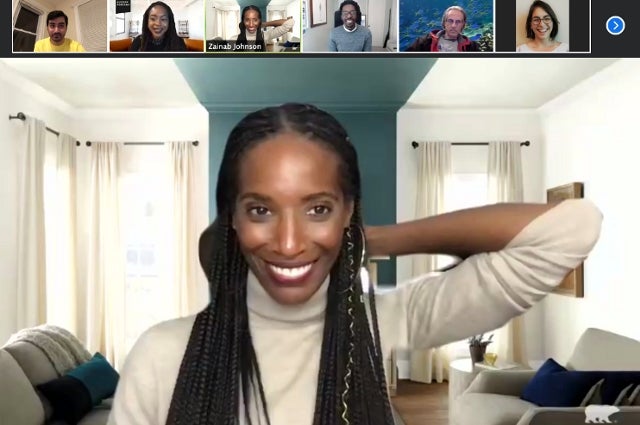 Earlier this fall, as Amin Fahimi Moghadam, AG21, and Aliesha Porcena, AG21, were planning their first event as this year’s Community Fellows at the Graduate School of Arts and Science (GSAS)—charged with building an inclusive community for graduate students of color and other underrepresented groups—they knew they needed to do something different.

Plenty of workshops focusing on diversity, equity, and inclusion were already available. Before long, though, the pair had come up with an unconventional idea. Instead of another workshop or conversation to cultivate community among underrepresented GSAS students, they decided to host a comedy show.

“We wanted to do this engagement in a way that would help us to cope with everything that is going on,” said Fahimi Moghadam.

“How can we do justice to what’s going on, but also bring light to it as well?” Porcena said. “We’ve been through a lot of pain and trauma. We need to laugh.” Thus was born DEI Comedy Night—for diversity, equity, and inclusion.

Bringing Personal Experiences to the Table

In 2018, GSAS launched the Community Fellows program “to engage graduate students in helping the GSAS create an inclusive environment for graduate students of color through engagements, workshops, and social events,” said Jackie Dejean, assistant dean of research for Arts and Sciences and assistant dean of diversity and inclusion at GSAS. Dejean co-directs the Community Fellows program with Mary Beth Berg, assistant director of interdisciplinary programs. And this year, Dejean noted, the new GSAS Pledge for Institutional Change and Commitment to Anti-Racism deepened and enhanced support of the fellows’ efforts.

The pandemic cut short the work of last year’s community fellows, and it’s front and center as an additional challenge for Porcena and Fahimi Moghadam. Also layered in is the renewed focus on racial justice sparked by George Floyd’s killing in May and the Black Lives Matter movement. The two began their fellowships in August, having been selected from a pool of applicants to serve through May 2021. 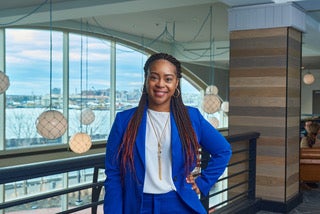 “This work is intentional work, it’s actionable work, and so it’s not going to just come,” Aliesha Porcena said. “You need to go at it.”
When Porcena began her master’s in public policy at Tufts last fall, she remembered her sister’s regret that she hadn’t been more involved in the Babson College community while earning her M.B.A. And when she heard about the opportunity to serve as a GSAS community fellow, it resonated with her area of study—policy, people, and systems and what communities of color need to thrive.

A native of Boston, and the youngest child of Haitian immigrants, she said she tries to bring her personal experiences into everything she does. “I realized that I could do more to create a community for myself at Tufts, and I needed to do it,” she said. As a community fellow, Porcena, who is 31 and works full time, hopes to create programming that considers part-time students’ needs.

Fahimi Moghadam, who is 28 and working on a master’s in diversity, equity, and inclusion leadership, knew he would apply to be a community fellow when he heard Dejean’s pitch on the program in a class last year. Originally from Dezful, Iran, he’s drawing on his architecture background to study how human-made environments contribute to people’s feeling of belonging. 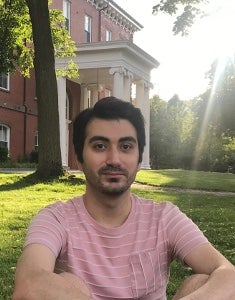 “We know that the need for community is greater now, but building the community is harder,” Amin Fahimi Moghadam said.
The fellowship appealed to him on two levels. “I get to help community building and help underrepresented students, and at the same time, I get some leadership experience,” he said.

While he feels included at Tufts, Fahimi Moghadam knows that underrepresented students face a variety of challenges. The “umbrella issue,” he said, is that students need to feel more comfortable voicing their concerns and challenges.

This year’s fellows were selected because their essays revealed “incredible experiences that created sensitivity within their perspectives,” Dejean said. So far, the pair have been successful advocates. “They’re very passionate about their concern for their classmates,” she said.

Porcena and Fahimi Moghadam are organizing four events, two together and two individually. Making events as inviting as possible despite pandemic constraints has been a key consideration. In fact, Fahimi Moghadam sees it as their biggest challenge. “We know that the need for community is greater now, but building the community is harder,” he said.

Porcena pointed to a particular challenge from the pandemic: free food or other giveaways are always good ways to draw people to events, but that’s clearly not happening this year. Still, she didn’t want to lose that vibe over Zoom. To that end, 10 DEI Comedy Night attendees received $25 Tufts University Bookstore gift cards.

The event, which took place Nov. 18 and featured stand-up comedian Zainab Johnson, was a success. With 110 attending virtually, it was the best-attended event in the program’s history. And, though Porcena was a little nervous beforehand, Johnson offered the comic relief they’d envisioned. Johnson also stayed late; the evening ended with “a really beautiful discussion,” Porcena said, led by Jeraul Mackey.

Looking ahead, Fahimi Moghadam is thinking about how to create an event about “participatory, inclusive placemaking” that’s conducive to a remote format. Porcena hasn’t yet decided on what she’ll do, but wants it to be in synch with the times and the community’s needs. They’ll also co-plan a mentoring event.

To Fahimi Moghadam, these events are all of a piece with the commitment to diversity, equity, and inclusion he’s seen this year at Tufts. Having a pipeline of events—and GSAS fellows—not only engages students with the program, but it underscores the effort needed to address diversity inequities. “This work is intentional work, it’s actionable work, and so it’s not going to just come,” Porcena said. “You need to go at it.”

Heather Beasley Doyle is a freelance writer based in Arlington, Mass.