The Music and Magic of Words

Bookish: How do you get through tough times, solve personal puzzles, and change your whole reality? Read, says Ariana Neumann, J92 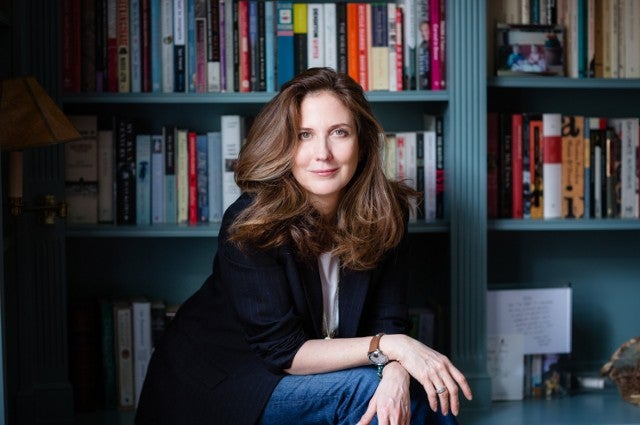 Whether she’s reading literature or poetry, magical realists or Russian novelists, English or Spanish or French, Ariana Neumann, J92, has always found comfort and inspiration in the written word.

Author of the memoir When Time Stopped: A Memoir of My Father, Survival and What Remains, Neumann loves how a musical passage can sway you or a beautiful image uplift you, how a strong character can make pages fly by, and how a captivating plot can make you see your own story differently.

She relies on her library to boost her mood and inform her writing, but also to take her beyond the world she knows. “I think I could lose any of my other senses, but if I lost the capacity to see or hear words, I would really be distraught,” Neumann says. “Words give me meaning and inspiration—and they allow you to travel no matter where you are, and no matter how quarantined you are.”

Tufts Now: Who are your favorite authors?

Ariana Neumann: I have so many favorite books and authors, I would struggle to give you a list on that in under an hour.

I just read a book by a wonderful current writer named Marieke Lucas Rijneveld, who is Dutch and just won the International Booker Prize. It's called the Discomfort of Evening. It’s incredibly sad and really disturbing—the descriptions are so vivid, they really make you uneasy as a reader. But it’s so beautifully written, and she has  a really powerful voice. I just know that I’m going to read whatever she writes.

I love the Russian writers—Chekhov and his short stories, Tolstoy, and Dostoevsky—and South American writers, as well; all the traditional magical realists, García Marquez, Isabel Allende, but also Jorge Luis Borges, Vargas Llosa. And the Mexican writers, Carlos Fuentes and Octavio Paz. I love the way Latin American writers play with reality, what is perceived as reality, and the sense of possibility.

Listen to a conversation with Ariana Neumann about her favorite books.

I grew up in Venezuela in a place filled with mystery, witchcraft, and strange beliefs that there is much more to life than what you see and understand—I just think life is richer if you look at it that way. A little bit of magic in everyone’s life, I think is key.

There’s also a Canadian poet called Anne Michaels whom I absolutely love. She wrote a book called Fugitive Pieces about the fragmentation of memory, which is a little bit about the Holocaust, but also about living with shadows and darkness and hope.

What do you look for in a book?

What catches my attention is a strong narrative author. I like a narrator who, even if he is unreliable or flawed,  can carry me through the book. Other than that, I’m very easy in that as long as the words move me and take me somewhere else, I’m pretty hooked.

I like poetry, and I think that’s what I like in my writers—that they create vivid images and poetic descriptions, and, through that, evoke feelings. I like to be moved and transported by my books. I like them to be musical—I like to be able to read them out-loud and feel swayed by the cadence of the words.

For example, in this book Fugitive Pieces by Anne Michaels, there is a narrative arc, but that’s not what the book is about. It’s about these beautiful moments that the novelist, who is also a poet, creates. The world seems a better place just because this book exists and Michaels can put these words together in such a beautiful way.

What draws you to poetry?

Poetry to me is like short brilliant bursts of music. I suppose it’s akin to the joy that people get from playing a song that they love. I have a whole shelf of poetry. Sometimes you just need to cry and sometimes you need to laugh, and sometimes you just need a little bit of a distraction or to feel positive about something- there’s always a poem for everything you need.  And they’re short. It’s like having a little beauty pill that makes life better, if that makes any sense, better even if just for a few minutes.

What languages do you read in?

I would say that probably about 80 percent of everything I read is in English. But I read probably 70 percent of any poetry in Spanish. I just love the Spanish language for verse. And if you can, any magical realism book should be read in Spanish. English is more direct and precise, but Spanish is much more colorful. If you were going to describe a beautiful painting, for example, you would have to use Spanish to describe the colors and the emotions it evokes.

I also read in French. When I studied at Tufts, my literature degree was in French literature, so I started to love all the great French poets and writers as well.

Are there any books you love that would surprise people who know you?

I love all the Agatha Christie books. I absolutely adore them. When I was pregnant with my children, my brain just turned to mush, and Agatha Christie was as intellectual as I could get. I read a series of hers about a detective couple called Tommy and Tuppence. I think people might be surprised to know that I read every single one about three different times during each pregnancy.

I like how they are set up: you arrive and it all seems so incredibly baffling, and then by the end of it, it all makes perfect sense. It’s a bit like you’re in the middle of a mosaic, surrounded by these tiny little pieces and so close that you can’t make sense of any of them. And yet, a little bit of time and a little bit of distance allow you to see the full picture. I like that sense of completion and solution of a mystery. It’s very black and white, but it’s very life affirming and very reassuring that everything falls into place and that there is a reason for everything, really.

Are there particular books that have shaped you or helped you through difficult times?

Love in the Time of Cholera is one of the books that most shaped me, because it’s a huge, sad, funny family saga about remembrance, love  and the now, and its magic brought me back to my Venezuelan roots.

The book that probably stayed with me the longest is Paula, a memoir by Isabel Allende, which she wrote in the hospital while her only child was very, very ill, while she was waiting for her to die. It is horrendous, harrowing, and really deeply moving, but it’s also incredibly beautiful. It’s a testament to a mother’s love and the fragility of life, and about hope. And it’s not just about the capacity to love, but also about the vulnerability that love produces, and the enormity of grief.

There was this beautiful Graham Greene book called The End of the Affair, which I read in my twenties. I was personally going through a difficult, sad, and very emotional time, but The End of the Affair somehow was much more miserable. Being able to cry for these characters who were so ill-fated made it more bearable, and got me through my own silly sadness at the time. Sometimes feeling your own pain is very difficult, but if you project it onto someone else, it’s easier to feel their pain. It allows you to deal with yours.

When I was a little girl in Caracas, my mother used to read this book with a marvelous title, El Cancionero del Amor y del Dolor, which means The Songbook of Love and Pain. It’s a collection of Latin American and Spanish writers that goes from the 18th century to the early 20th century. I would read it to my children when they were little so much that now when I pick it up, it’s falling to pieces!

Are there books that you’ve come to understand in a different way over the years?

All of them, right? Because I think it’s not so much what the book gives you, but what you give the book. The words and storylines and tidbits you connect with change with your experience and what you need as a reader.

There's a wonderful American writer called Elizabeth Rosner, who has written a book called Survivor Café, which is quite recent, and there’s also an older one, a novel, called The Speed of Light. In my first reading of the book, I felt it was like a poem. She creates these beautiful images, and I was just transported. But I didn’t really understand what she was talking about—about living with the shadow of the Holocaust.

Then on my second reading, having completed the research I’ve done for my memoir, all of a sudden the book became a completely different thing with much more meaning. It was actually more like a dialogue, like the writer herself was a friend.

What role does reading play in your life?

Reading is everything in my life. If you walk into pretty much any of the rooms that I spend any time in, there are piles of books everywhere.  I feel like I’m just —I’ll use the word- buried, but in a wonderful kind of way. I’m cosseted by books everywhere.

I read as an escape, for inspiration, for research. I do end up wanting to feel comfortable and going back to the writers I love, but I also think you have to get out of your comfort zone, read as widely as possible, and read things that you wouldn’t normally—things that challenge you. The more you read, the richer a life you’ll have.