An expert in environmental chemistry, Kenny taught at Tufts for almost 40 years 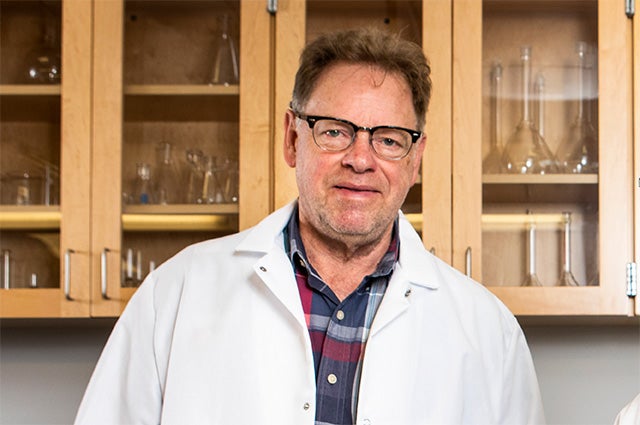 Jonathan Kenny, a longtime professor of chemistry in the School of Arts and Sciences, died on Dec. 9. He was 67. An expert in analytical, physical, and environmental chemistry, he had taught at Tufts since 1981.

“Jonathan is remembered by his colleagues as a dedicated and passionate teacher to the undergraduate and graduate students who took his physical and environmental chemistry courses,” James Glaser, dean of the School of Arts and Sciences, wrote in an email to the community. “He was an engaged and supportive advisor to his academic advisees, and a mentor and collaborator to the many students who performed research under his supervision.”

Kenny’s research focused on using fluorescence-based methods to tackle fundamental problems in photochemistry and applied problems, most notably in environmental sensing of groundwater contaminants. Other research projects included supersonic jet spectroscopy and calculation of the effects of greenhouse gases on global climate. He and his group published actively, including in The Journal of Physical Chemistry, Water, and Analytical Chemistry.

“In both his research and scholarship work and his community involvement, Jonathan was also an advocate for environmental issues,” Glaser said. “He was active in a wide range of related initiatives at Tufts, including being a member of the executive committee for the Environmental Science Program.”

In addition to his chemistry courses, Kenny taught less specialized courses for non-chemistry majors. In 2019 he offered the summer course Big Bang to Humankind, which explored the origins of the universe, the formation of the Earth, the chemistry of life, the development of complex organisms, and the development of modern humans.

He was active as a mentor, taking part, for example, in the 2019 Visiting and Early Research Scholar Experience (VERSE) program, which brings college students from underrepresented backgrounds to Tufts for ten weeks during the summer to work on research projects. That year, he mentored Binh Nguyen, who researched complexation, or how molecules bind together to form larger, more complex molecules.

“I view him now as more of a friend, and it has been really great and a very valuable opportunity having that personal connection with a professor,” Nguyen said in 2019 at the end of the program.

Kenny is survived by his wife, Anne Foley, and their five sons and their families. “A devoted father, he was very active in his sons’ upbringing and school communities, having coached Lexington youth soccer and baseball for years,” Glaser wrote. “He and his family dedicated much time to Notre Dame’s Family Volunteer Camp, where alumni returned to the university’s campus in the summer to volunteer at nonprofits helping the local community.”

“We know that Jonathan’s loss will be felt keenly by many who knew him as a wonderful friend, colleague, collaborator, teacher, and mentor,” said Glaser.