In the aftermath of the wider reckoning with racism in America, some Tufts teams are using their virtual time together to become more informed about the issues 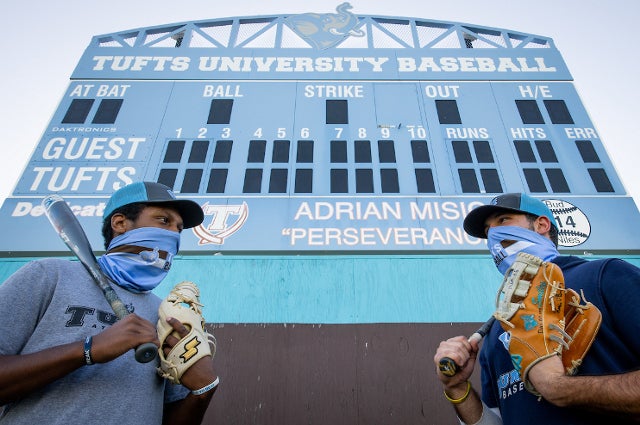 It’s Monday morning around 10, and a member of the women’s soccer team has just posted an item for her teammates to consider. Rather than soccer tips, it’s an article, podcast, or video about race and social justice in America. The focus could be microaggressions or Kamala Harris or implicit bias.

The team has been posting a weekly prompt for discussion since summer, in response to the wider reckoning with racism in America following the killing of George Floyd in late May.

Their effort is just one example of how Tufts teams have been confronting one of the pointed issues of our time: racism. Though athletics teams’ activities have been drastically curtailed by the pandemic—competitions cancelled, practices with social distancing and masks curtailed and then cancelled, too—the teams still gather virtually. Some are collectively considering what racial justice means to them and to the world they live in.

For the women’s soccer team, the weekly posts “have fostered natural conversations that we have with each other, whether it be at practice or within our house,” says Carolena Scala, A22, a soccer midfielder who lives with seven of her teammates.

Talking with teammates makes the discussion easier, says Scala. “This is definitely a very hard topic to talk about, so having an entire team of people that I’m close with really helps to facilitate and foster meaningful and needed conversations,” she says. “I understand that being a young white female, my reality is very different than many others who live different lives simply because of their skin color.”

Scala says she had conversations in high school around the topics of race and equality, “but never to this extent, as the BLM movement is now at the forefront of our lives. For myself, it has been a huge time of reflection, growth, awareness, and compassion.”

The team set out to sustain conversations over time, head coach Martha Whiting says. “We didn’t want it to be something where this big, horrible tragedy happens and we talk about it for a month and then it goes away.”

Team members took part in a fundraiser for Black Lives Matter and related charities, in which participants ran or biked 8.46 miles—a distance chosen to memorialize the 8 minutes and 46 seconds that a police officer in Minneapolis left his knee on Floyd’s neck, killing him. The Tufts players “posted on their Instagram the link so that people could then donate,” Whiting says.

“I love that these kids are so engaged, and they’re engaging each other and us, the coaching staff,” she says. “I’ve learned a lot, too.”

Other teams spontaneously made similar efforts. The men’s soccer team used the extra time they had this fall to educate themselves on issues such as social justice reform and diversity, equity, and inclusion, says first-year head coach Kyle Dezotell. The same is true for women’s lacrosse and women’s cross-country teams, their coaches Courtney Shute and Kristen Morwick report.

The baseball team was having regular online team meetings through spring and summer, and as the issue of racial justice rose to prominence, three players started giving presentations about it, providing context for what was happening.

“We offered new perspectives that we considered a lot of people hadn’t really thought about,” says Miles Reid, A22, of the efforts he and teammates Steven Landry, A22, and Josh Herring, A21, made. They talked about redlining—the systematic denial of housing and services to Black people—and its continuing prevalence now, as well as systemic educational disparities across racial lines—how schools with mostly Black students get far fewer resources than nearby schools with mostly white students. 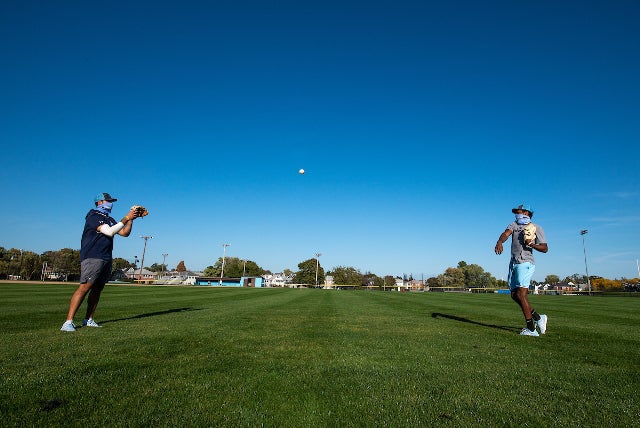 Back in October, Miles Reid and Peter de Maria were able to play catch on the baseball field. “Having those uncomfortable conversations actually in the end brings a team together,” says DeMaria. Photo: Alonso Nichols
Reid, who grew up in Silver Spring, Md., just outside of Washington, D.C., says his parents talked about racism with him growing up. “My parents have been pretty open about the problems with the world,” he says. A couple of classes in high school “definitely opened my eyes” even more to systemic racial injustice, and he’s studying urban sociology, continuing to learn about racism in America.

It also is part of his daily life. “We talk about that kind of stuff every day,” he says. “So it was all pretty relevant for me and I felt pretty comfortable just jumping in and explaining it a little bit.”

Teammate—and roommate—Peter DeMaria, A22, says that the sharing sessions were helpful. “It is important to see what’s happening in the world.  It was great to listen and have a conversation with the team to understand different perspectives on the issues at hand,” he says.

Sometimes talking about race can be difficult, but the baseball players didn’t mind. “Having those uncomfortable conversations actually in the end brings a team together,” says DeMaria. “Once you can come to a consensus on how you feel and move forward as a team and trust each other, you know that it’s a safe space.”