Amid Uncertainty, Even a Distant “I Do” Strikes a Chord

For socially distanced undergrads, the Marriage Pact may be a light-hearted backup plan, but they were ready to take a leap of faith 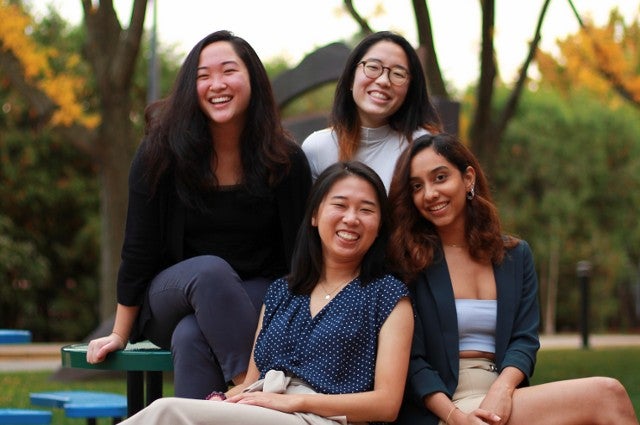 You don’t usually think of Tufts undergraduates as marriage-minded, focused as they are on more pressing matters, like turning in term papers or prepping for finals.

But surprise—the Marriage Pact, an algorithm created by students that matches students with likely future spouses should their search for a life partner prove unsuccessful—recently matched nearly 3,000 undergraduates at Tufts, more than half of the undergraduate class, as the challenging fall semester drew to a close.

Billed as a “fun way to find connection during these abnormal times,” the Marriage Pact is the brainchild of a pair of Stanford undergraduates, who created it for a marketing design course in 2017. They came up with a complex, values-based survey that algorithmically identifies the best fellow student to whom one could potentially say “I do.”

The Marriage Pact made its debut at Tufts this fall thanks to four highly motivated housemates, seniors Emai Lai, Avni Ambalam, Katrina Dimalanta, and Anne Lau. The Tufts team sent out the Stanford survey for potential partners to fill out on Monday, Nov. 23, and over the next week rolled out targeted messages urging participation, deploying social media and putting up dozens of posters around campus.

“We all breathed, ate, and slept Marriage Pact for the whole week,” said Lai. “We would talk about it all the time, and were always checking the numbers on our dashboards to see how we were doing.”

Once the survey results were in, the program sent out emails to participants with the name of a respective match. There is no pressure for either party to make contact, but they could—and some did—via email, Instagram, or Facebook.

“A lot of my friends took the survey just for fun, but the concept is that if you want a backup plan, it’s there for you,” said Lau. “It’s really up to them to reach out to each other later.”

Though the notion of a “pact” implies a binding promise, in fact students interpret that loosely. “We tried to make sure people didn’t think of it as actual marriage, but just an opportunity to have a connection with someone who may or may not be part of your regular circle,” she said.

David Koval, E24, saw a sign on campus and decided to take the survey. “I just thought it was kind of funny and a thing I’d never really heard of, and I wanted to give it a whirl and see what would happen,” said Koval, who is studying civil engineering. “I definitely wasn’t searching for anything long-term—I was just trying to see what would happen if one thing led to another.”

The survey sparked some interesting conversations with friends, particularly about one question: Would you rather leave someone at the altar, or get left? “It tells you a lot about the person,” Koval said. “I said I’d rather get left. I felt I wouldn’t want to have to face the other person if I did leave them at the altar—I would feel horrible.”

The name of Koval’s match came in at late on a Tuesday night. “I didn’t know her, but one of my friends was like, ‘Oh wait, I worked with her,’” Koval said. “I was like, oh my God, stakes raised.” He reached out to her the next day and they exchanged messages for half an hour. He was a bit disappointed that the conversation didn’t go anywhere, he said, but enjoyed the process.

“It was nice to have just a change, a possibility something might happen instead of nothing,” he said. “I was grateful for the opportunity.”

The Tufts-Stanford connection came about when a Marriage Pact team member reached out to Lai about bringing it to Tufts. The two of them had become friends after sharing an internship over a year ago. “It was exciting to reconnect with him and hear all the success stories of matches made at other schools,” she said.

She would soon become impressed with the sophisticated organization of the Stanford team, enough to sign on to become a Tufts rep. Despite this, Lai and her housemates were skeptical of the idea of a marriage pact.

“All of us felt at first—marriage! No one wants that now. Especially at Tufts, the vibe is not marriage,” Lau said. “But we made sure that people saw it as more of an opportunity to make connections with other people and to make a connection with someone who might somehow pop up later in your life.”

Social connections of any kind may be understandingly welcome this year. Tufts resumed classes this fall after the sudden mid-March campus departures as the pandemic took root. This fall, social distancing, masks, hybrid classes, and the fact that some students opted to stay home and attend classes remotely, have put a crimp in the highly social collegiate experience.

“We wanted to come together to do something to uplift the Tufts community and just help make everyone’s day,” said Dimalanta. “I know a lot of people were saying this was one of the highlights of their semester. It was nice to know that we could provide that for them.”

The positive response at Tufts is further confirmation that the success of the Marriage Pact since its pilot three years ago. By the end of November, the program had been rolled out at six universities, with more than 30,000 participants and 15,000 matches.

The Algorithm of Connection

The Tufts team brought their own enthusiasm to the project, aided in no small part by the fact that they live together in an off-campus apartment; in a show of solidarity, they branded their group chat “Marriage Pact, HQ.”

Lai, who is majoring in human factors engineering with a minor in computer science, said the experience delivered an unexpected academic bonus. “I’m interested in marketing, algorithms, psychology and design, so the chance to work on this project was a perfect combination of all of these fields. It’s inspiring to see the possibilities of how all of these different areas can come together in a project that’s as big and impactful as the Marriage Pact.”

As for results, the team doesn’t have any access to the data, so they have no clues about specific matches or survey responses. They did offer “date ideas” for meeting up with matches, which observed pandemic safety protocols, such as curating personalized Spotify playlists or the online social deduction game Among Us.

“I liked taking the survey with my roommate—we were both laughing so hard,” said Victoria Lopez, A23, who is studying community health and considering a minor in cognitive brain science. “I don’t want to be in relationships, especially now—I’m not that comfortable—but I kind of wanted to make a new friend or get matched with someone I already knew.”

Lopez didn’t end up making contact with her match. “I’m not usually the first person to speak up, and he didn’t contact me so it all worked out,” she said. But she had a good time going through the process, she added. “It was just really fun overall. I would definitely participate again, just to see who would come,” she said.

Lau, who took the survey, breaks out laughing as she recalls feeling put in an awkward situation when she learned of her match. Not interested, she still politely called the fellow student to say, essentially, let’s not talk about this. How did that conversation go? “It was short,” she said.

Still, there are takeaways the team has mused on as the first semester of a challenging year came to an end. “As a senior, you’ve spent four years getting to know different people, and this experience showed me that I truly chose the right place, I made the right decision to come to Tufts,” said Dimalanta. “To me, the survey showed that Tufts is that perfect size—you could see how big Tufts can be, but also how closely connected we can be, even when we’re not physically close together.”

“Even if people didn’t necessarily become friends with or meet up with their match, I think the Marriage Pact created a really exciting buzz,” added Lai. “If anything, it provided a source of entertainment, and sparked many conversations. It was cool to provide that entertainment.”