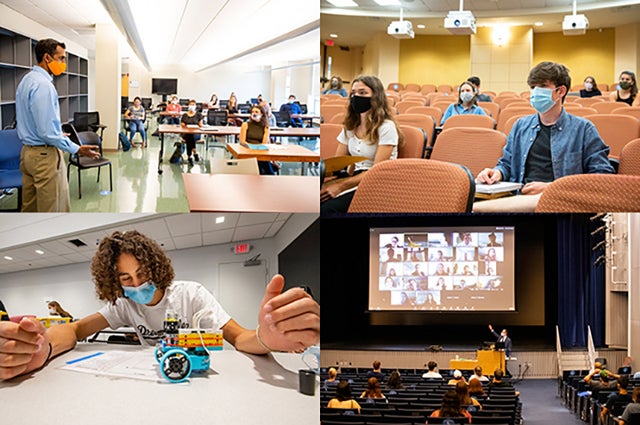 It all started off so normally. Remember when a photo of a large crowd wouldn’t cause you to bat an eyelash? As I’ve begun to look back at the last year of images, suddenly the mundane is eye-catching.

A group of actors simply gathered together for a group photo on set of Sense and Sensibility. Students stood shoulder-to-shoulder to watch as visiting artist Lina Puerta led a papermaking workshop at SMFA. The women’s basketball team packed Cousens Gym as they steamrolled their way to the NCAA Division III national tournament.

When I photographed graduating medical school students Sebastian Hernandez, M20, and Christina Callas, M20, the couple’s biggest worry was whether or not they would match in the same city for their residencies during the upcoming Match Day. Little did they, or any of us, suspect that life as we knew it would change dramatically. In a matter of days, the full force of the COVID-19 pandemic would change it all. 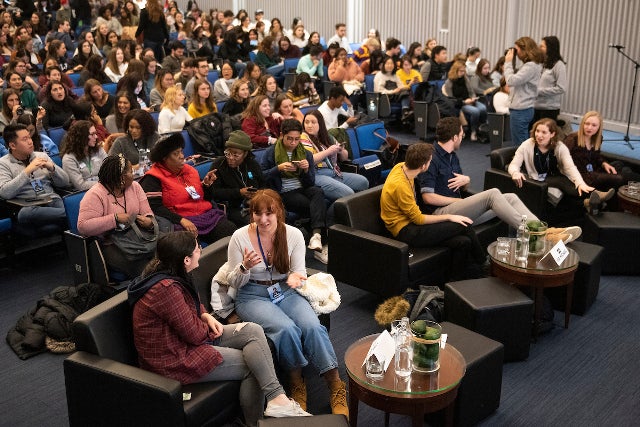 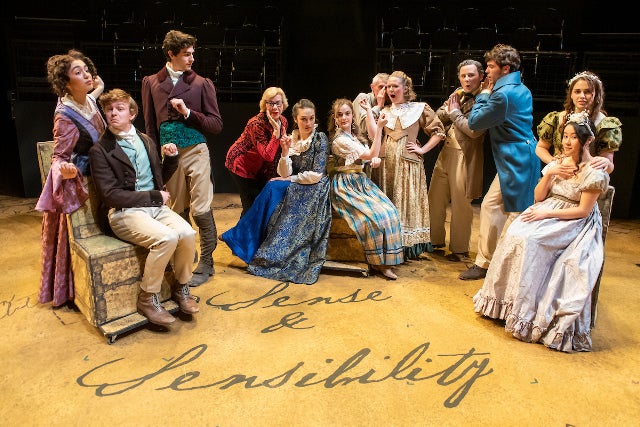 The cast of the spring production of Jane Austen’s "Sense and Sensibility" pose for a portrait with Professor Barbara Grossman and Senior Lecturer Danny McCusker on Feb. 26. Photo: Alonso Nichols 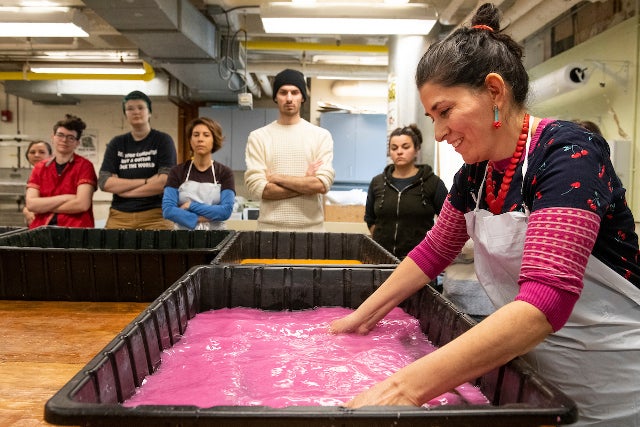 Visiting artist Lina Puerta leads a workshop in the paper making studio at the School of the Museum of Fine Arts at Tufts on Feb. 27. Photo: Alonso Nichols 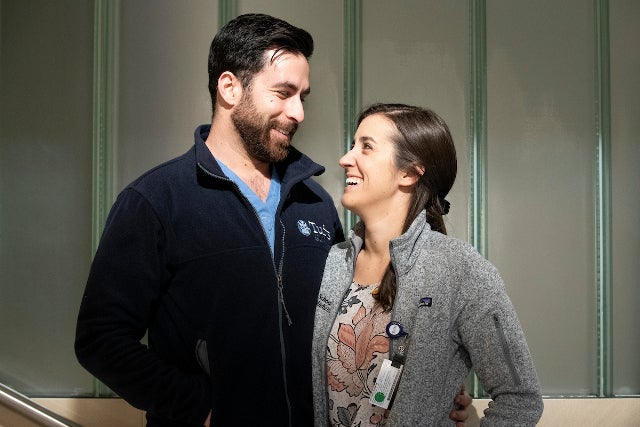 Sebastian Hernandez, M20, and Christina Callas, M20, pose for a portrait at the School of Medicine on Feb. 24. The couple found out the results of their residency application process on Match Day in March—it was what they were hoping for. Photo: Alonso Nichols 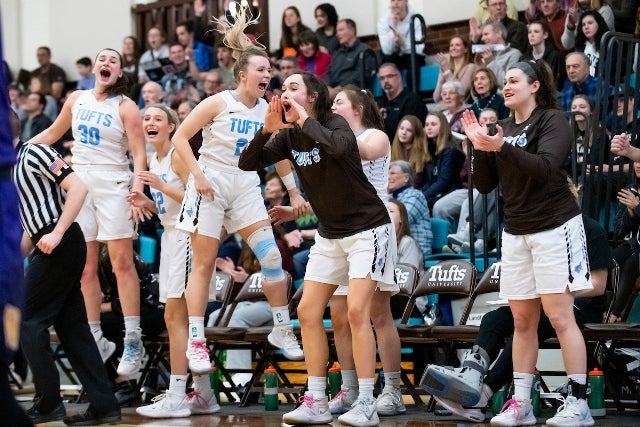 The Tufts bench erupts in the NESCAC semifinal game against Williams on Feb. 29. The Jumbos defeated the Ephs 69-63 to remain undefeated. Photo: Alonso Nichols 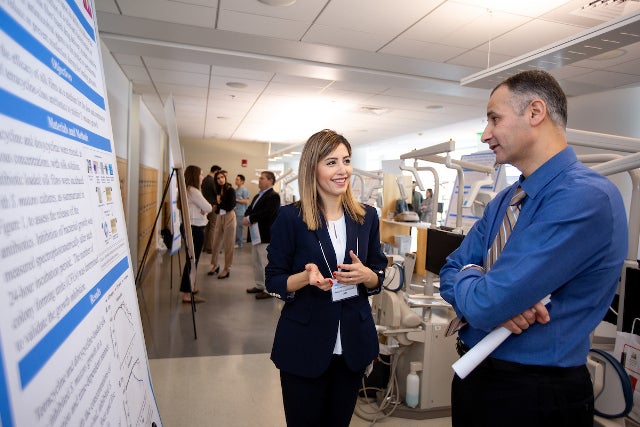 Sadaf Foroutanjazi, IS21, DMD21, discusses a research project during the annual Bates Day 2020 presentations at the School of Dental Medicine. Photo: Paul Rutherford

It All Closes Down

On March 16, the day the university officially shut down, I went out on the Medford/Somerville campus to survey the scene. I saw students peering into the windows of Cabot Hall as the doors to the Hall of Flags were locked. A couple of remaining students were packing their cars to move home. As I greeted them to make some photos, we were notably wary and apprehensive; wanting to connect and needing to stay apart.

All of our campuses felt extraordinarily empty as people stayed home. It was bittersweet to watch the flowers bloom without our community, neighbors and groups of prospective students present to take them in.

To ease my own sense of monotony, I began to make walks just to look for the warmth and the color. The sight of the cannon, painted for the Class of 2020, held a bright hope in its message “We’ll Meet Again.” 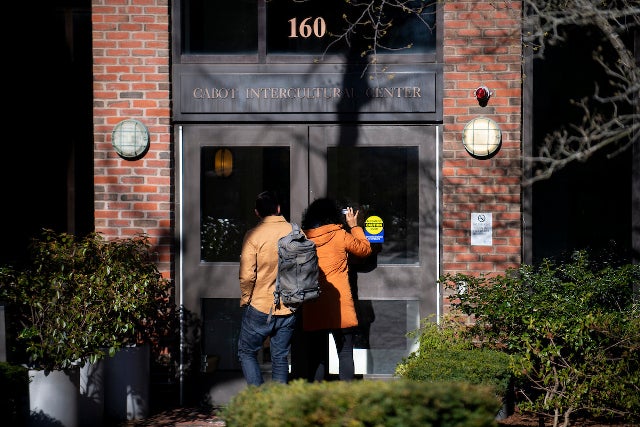 Members of the Fletcher community peer through the doors of Cabot International Center after the closing of campus buildings on March 16. Photo: Alonso Nichols 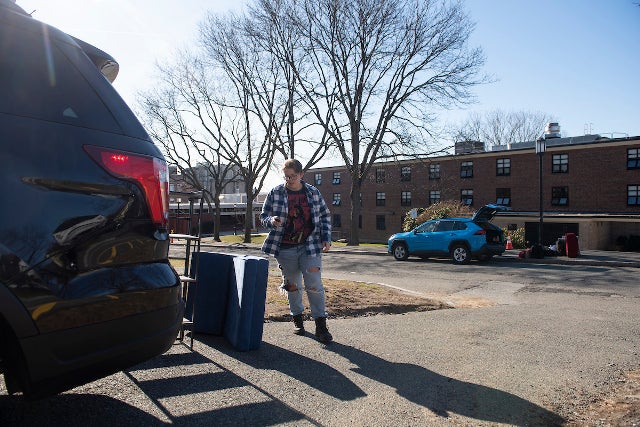 Students wrap up moving out of their residences after the closing of campus buildings on March 16. Photo: Alonso Nichols 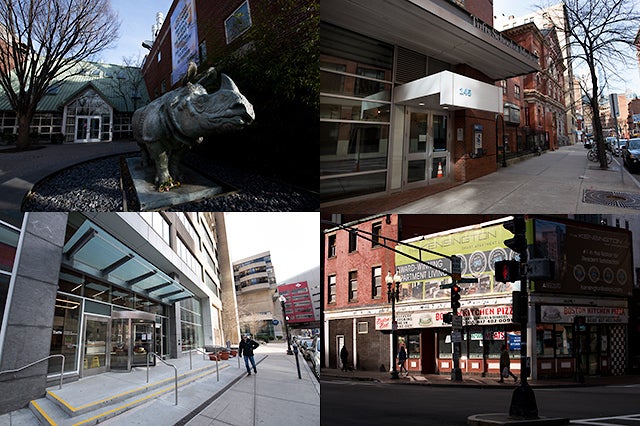 The SMFA and Health Sciences campuses are virtually empty on March 18 as Tufts—and the state of Massachusetts—shut down all non-essential operations to slow the spread of COVID-19. The intersection of Stuart Street and Kneeland Street is usually bustling with vehicular and pedestrian traffic at almost any hour of the day. Photos: Alonso Nichols 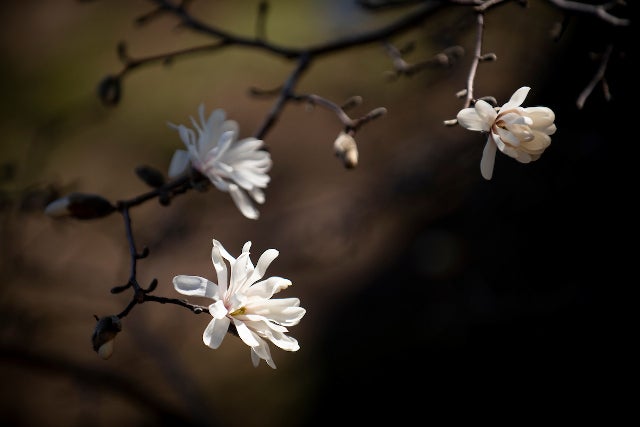 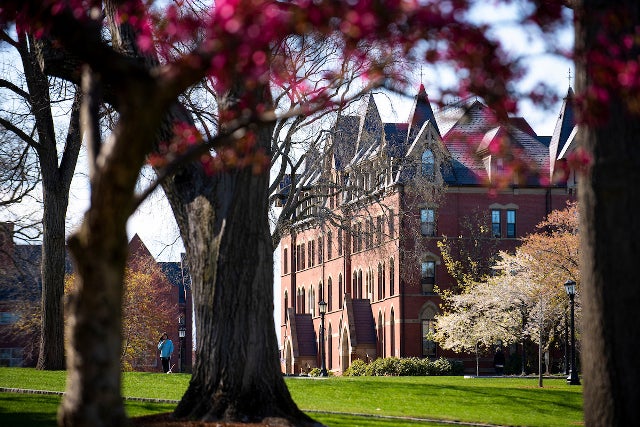 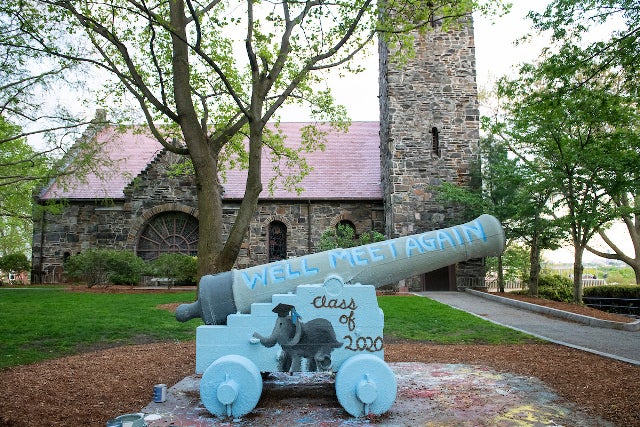 Amy Tong, A21, painted the cannon with a hopeful message on May 16 on the eve of what would have been the commencement ceremony for the Class of 2020. Commencement was postponed due to the pandemic. Photo: Alonso Nichols

The summer was a prelude to the activity that was to come with innovations in operations at the Foster Hospital at Cummings School of Veterinary Medicine and the temporary use of Carmichael Hall’s facilities by FoodLink to distribute donations from local grocery stores and restaurants.

The university was also making preparations for the fall with the installations of the “mods” on the tennis courts and the transformation of major university facilities to allow for an in-person residential academic experience. 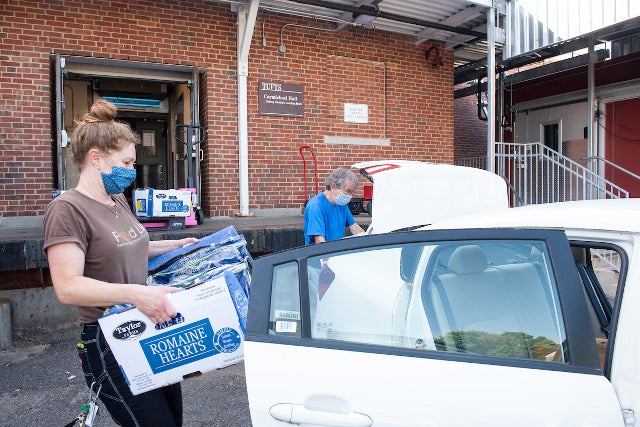 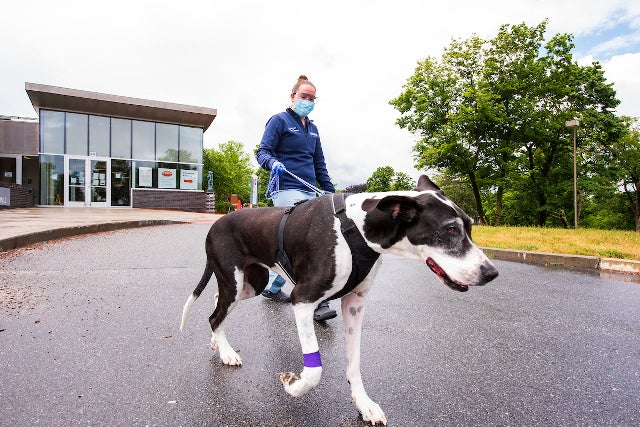 Veterinary technician Rachel Petersen returns Lexi, a Great Dane, to her family after an appointment at the Foster Hospital for Small Animals at Cummings School on June 30. Photo: Alonso Nichols 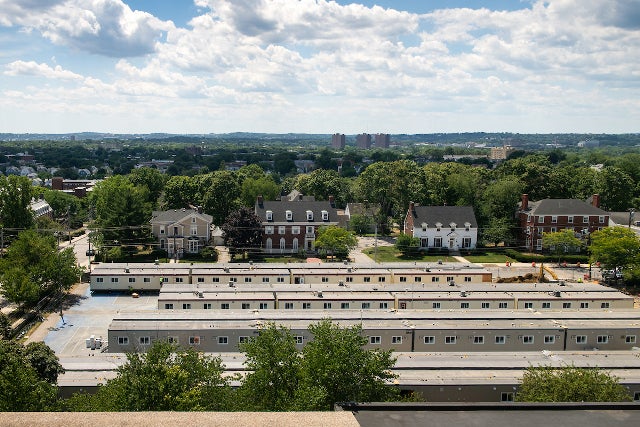 Modular housing units are installed on July 30 at the site of the Voute Tennis Courts at the corner of Packard Avenue and Professors Row. The “mods” will be used by students needing to isolate or quarantine. Photo: Alonso Nichols 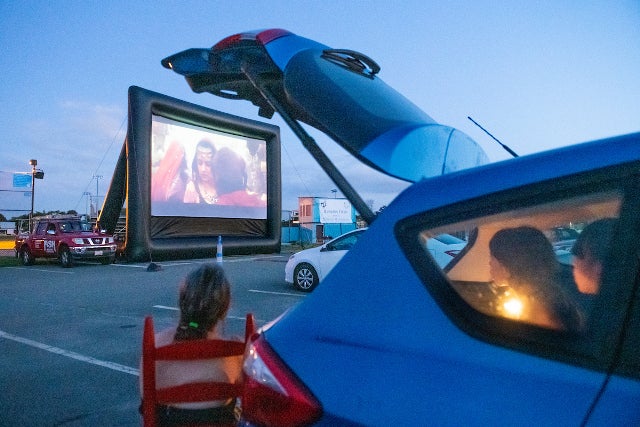 There was this tremendous energy and a palpable feeling of relief as students began to arrive to take their COVID-19 tests, pick up their IDs and move in to their residence halls. They and their families were overwhelmingly enthusiastic and grateful to start the fall semester. I took Victoria Osborne’s personalized Idaho license plate as a great note to usher in the new semester “EUROK”. “Definitely”, I said to myself, “and much better now that you all are here.”

Academic life was clearly different—yet somehow familiar—as we started the first day of classes, and a bit later when students returned to the studios at the SMFA. The Adirondack chairs helped people gather outdoors and bond. Athletics teams hosted practices outside and everybody seemed to try to make the best of classes and meetings on Zoom.

The election figured prominently in campus life with Tufts Votes and students watching the election from their residence halls. Campus life kept going, and I’m glad to say that I was here to witness these interesting times. 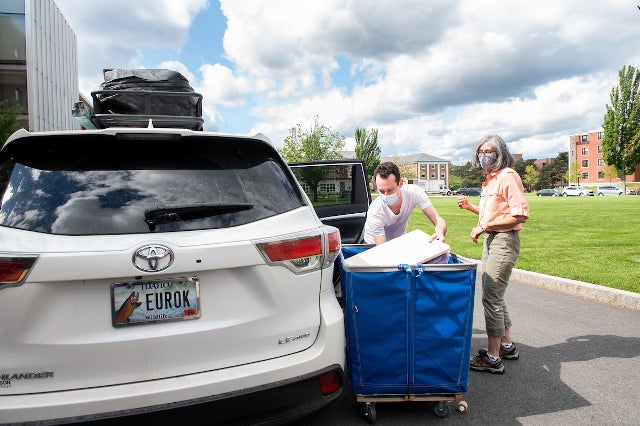 With help from nephew Jossef Osborn, Victoria Osborn unloads the car for her daughter Shasha Kingston, A24, on Aug. 28. Victoria and Shasha drove from Idaho to Tufts. Photo: Alonso Nichols 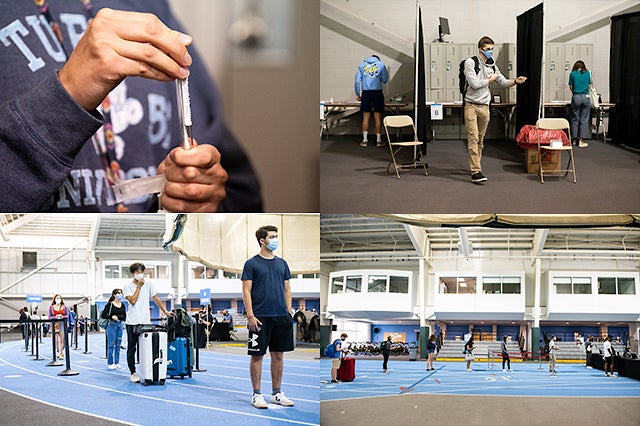 Testing and Arrival: Students arrived on campus in phases to a completely new registration and move-in process in Gantcher Center that included a COVID-19 test. Gantcher's high ceiling and large open floor plan made it an ideal space to spread out and safely bring students onto campus. Photo: Alonso Nichols 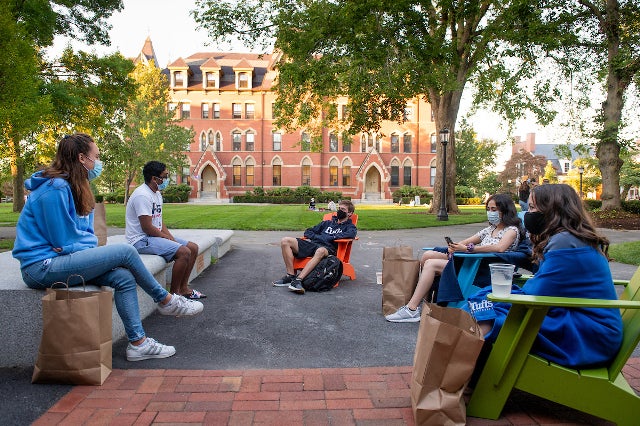 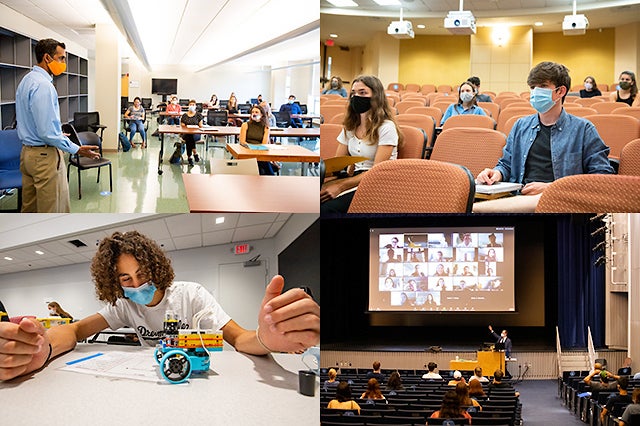 Classroom spaces on the Medford/Somerville campus were modified to reduce density and blend the in-person attendance with students participating on Zoom. Photos: Alonso Nichols 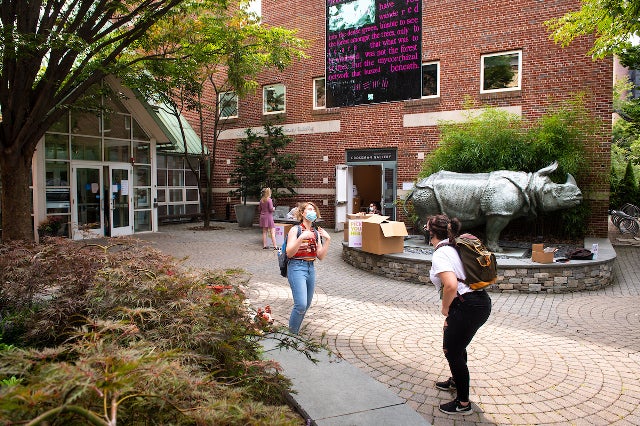 Wilamina P. Heifner, SMFA21, talks with a friend in the courtyard at the Fenway Building on Sept. 17. Photo: Alonso Nichols 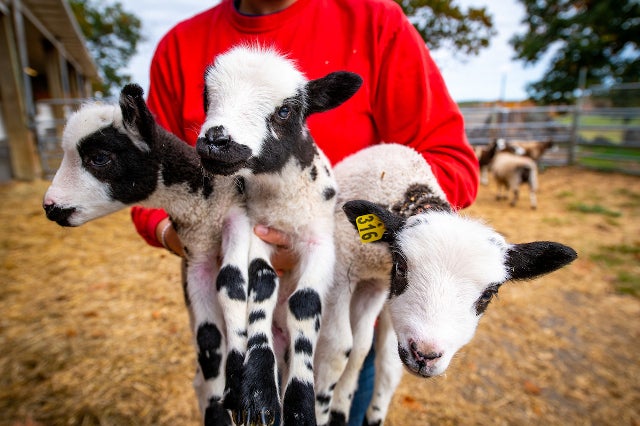 Livestock get plenty of care at Cummings School in October. Photo: Alonso Nichols 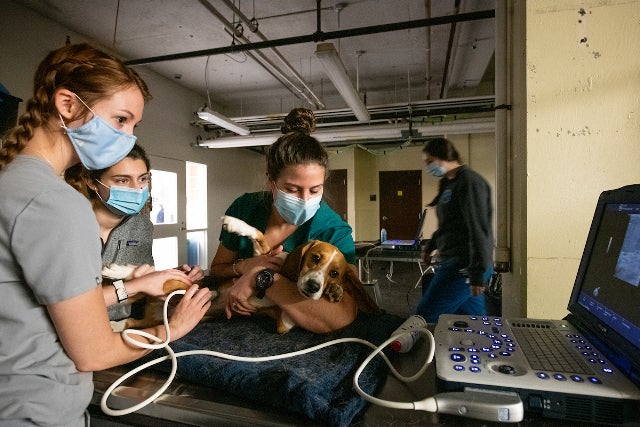 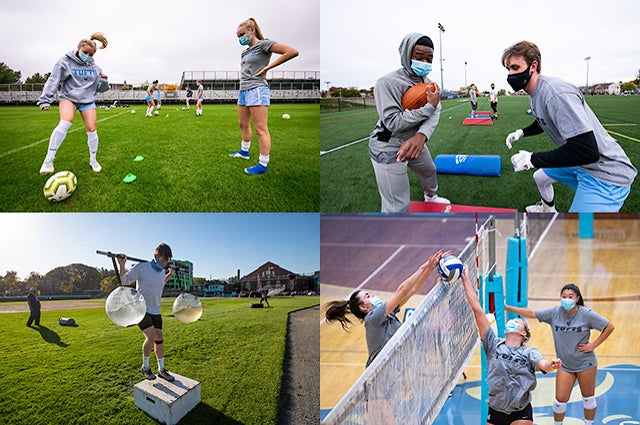 Tufts sports teams continued their training through most of the fall, with teams hosting a series of outdoor practices and skill building in October. Photos: Alonso Nichols 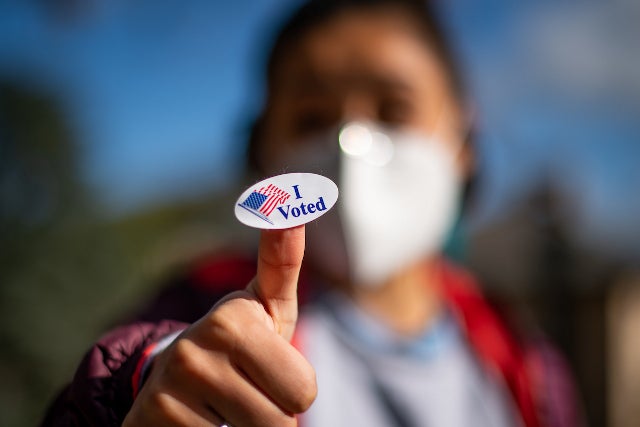 Daniela Sanchez, A20, holds up an “I Voted” sticker on Election Day on Nov. 3. Photo: Alonso Nichols 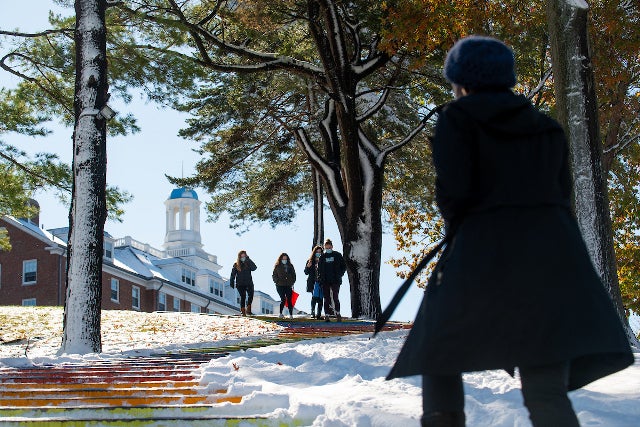 The Rainbow Steps are covered in a layer of snow after an unseasonably early snowfall on Oct. 31. Photo: Alonso Nichols 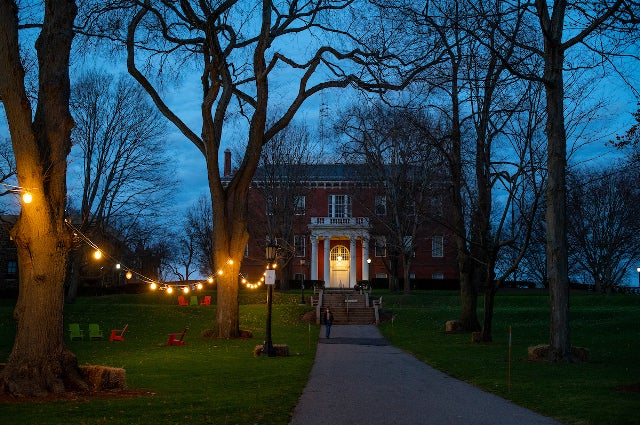 Alonso Nichols can be reached at alonso.nichols@tufts.edu.