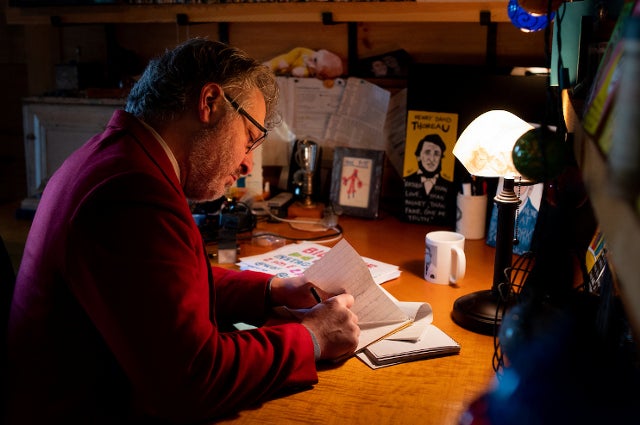 The pandemic may have brought most of the arts and live entertainment world to a grinding halt, but it hasn’t stopped Geoff Edgers, A92, national arts reporter for the Washington Post. His weekly Instagram show, Stuck with Geoff, is recorded live every Friday from his barn in Concord, Mass., with excerpts later published in the Post.

A relentless reporter—he got his start at the Sudbury Town Crier and advanced to the Boston Globe before joining the Post in 2014—Edgers is not by nature a desk guy. Deeply curious and peripatetic, he’d rather be on the road, interviewing and observing artists and entertainers up close and personal.

But Edgers is making the most of the pandemic lockdown—he came up with a format that meets a yearning for lively conversations that focus on the human impulse to create with everyone from singer Annie Lennox and comedian Gabriel Ignatius to Yo-Yo Ma and Dr. Anthony Fauci (twice).

Tufts Now recently spoke with Edgers via Zoom about his path to arts reporting, what defines his storytelling, and how Instagram, while not a substitute for writing, is good enough niche for now.

Tufts Now: Instagram interviews are just the latest in a varied career as a reporter that includes a documentary on the Kinks, children’s books, and a podcast—did you get started on that path at Tufts?

Geoff Edgers: When I was a student at Tufts, I read a review of an Elvis Costello album, Spike, in the Tufts Daily. It angered me, so I wrote a very aggressive letter to the editor. That was when I saw how I could use writing as a communication tool in a different way.

Another turning point was how I became an obsessive reader. At Tufts I started consuming almost everything, and that all goes back to Alan Lebowitz, an English professor. When I handed in a paper on Moby Dick that was my normal bare-minimum level of work, he called me out on it.

That was a wake-up call. Suddenly I became a voracious reader and really worked hard as a writer. Also, writing wise, Jonathan Strong ran a fiction workshop, and he was really instrumental in helping me understand the difference between thinking you’re clever and telling stories with characters and pace—the basic rule that has always served me well: “Show, don’t tell.”

Ultimately, what I learned is that being a good writer is not all that complicated. It’s about reading a lot, working hard on what you do, and then always feeling a sense of potential failure, that you’re really not going be able to ever write a story again that’s good. Those are the things that drive me.

Those traits clearly supported your career as a reporter.

If you don’t put in the time as a reporter interviewing people and then sitting down at the end and writing and reworking things over and over and over again, you’re not going to succeed. I learned all that at Tufts. 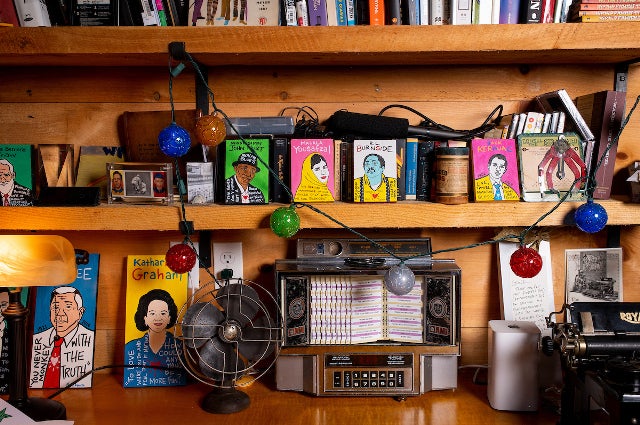 Geoff Edgers admits he has an “insane number” of original pop-folk artworks by Texas folk artist Chris Kruse, who works with mixed media on wood. When Edgers’ Instagram show started, he wanted something “Washington Posty” for viewers into an otherwise private space, so he commissioned Kruse portraits of Marty Baron, the current Post editor, and of Ben Bradley and Katherine Graham. And since he lives in historic Concord, he paid home to two his most famous neighbors, Thoreau and Emerson. Viewers may also get a glimpse into his penchant for vintage media-related devices, including a 1917 Royal typewriter, a 1970s Weltron 2001, a spherically-shaped stereo FM radio/cassette deck, or a massive 80s-era boombox. Photo: Alonso Nichols
My skill is reporting stories out in ways that most people don’t. Most of what I do is about obsessive reporting. When I did a profile of Chevy Chase, I met with him maybe eight times. When I did a story on Sinead O’Connor earlier this year before the pandemic hit, I drove in a van with her from San Francisco to Los Angeles, and then I flew to Ireland and spent four days with her. And beyond that, I also speak to as many people as I can. I treat it like someone covering the president, except I’m covering these fascinating cultural figures.

How did you arrive at arts reporting—especially profiles of artists?

I never wanted to be part of a pack covering the same political campaign or the same baseball team. I liked all those things, they were interesting, but I wanted to find special stories.

And what I found, by the time I got a job at the News & Observer in Raleigh, is that there were either super-smart arts critics writing to a very specific audience, or most art stories were not taken that seriously—“Oh, that’s a feature, give it to the intern.”

I found a huge area of the arts that wasn’t really served. So I was drawn to doing pieces that could allow me to use the skills of a magazine writer, but the reporting skills of somebody who knew how to read the police beat or cover a school committee meeting.

On your podcast page, you write that “other podcasts might cover artists, this podcast uncovers them.” What does “uncover” mean here?
In most coverage of famous people, we are used to having surface-level conversations that serve or promote a very specific product. Now, it’s just so strange to me to think that you could transmit something revealing or instructive about a stranger with that kind of limited time and in a controlled atmosphere.

So when we talk about uncover, I think it means how my editor Liz Seymour at the Post sees each of my stories as a “conversation ender.” She talks about me doing a story that is the last story you need to read. I hope people don’t feel like they need to read another profile of Chevy Chase or Roseanne Barr or Norm Macdonald. I hope that my story serves as the story, if that makes sense.

How do you know if you’ve achieved that?
I know I have the story if I can get to the essential core of what drives somebody to create the incredible work that has brought them attention. I write about comedians a lot—many of them are misfits. There’s a reason that they’re on stage telling jokes to strangers. Most have issues and deficiencies and complicated things that drive them. So I think it’s about finding a way to tell that story without going TMZ on them.

And I choose my subjects based on when I think there’s a great story, not on when there’s a product coming. My hope is someone opens the paper or goes onto the website and reads the story and think, “I had no idea. That was the story I needed to read today.”

Can you recall one story that hit the mark for you, in that regard?
The best example of that is Ava DuVernay. I identified her as an inspiring and fascinating figure, but the PR folks at Netflix, who were promoting a documentary, were like, “OK, let’s get you to talk to Ava for 45 minutes.”

I had a chance to talk to Ava before that interview, where I said, “Look, I don’t really want to do the story that is being pitched.” I convinced her to just say, “Forget it, let’s do it when we can.” And what ended up happening is I met her for breakfast. Then three months later, we met in California. A month later, she called me and said, “Oh, come to this studio and you can see me at a scoring session for this film.”

The point is, I spent real time with her, multiple times, and the story that we did was so much better than anything we would have basically burped out because of a product.

So let’s shift gears to storytelling on Instagram. You were fortunate to work out of this home space since you got the job at the Post in 2014. It’s a convenient base—but then comes COVID-19.
At first I was trying to figure out, “What do I do to keep sane?” Then my editor David Malitz, a deputy features editor, and Phoebe Connelly, deputy editor of video, came up with the idea of Instagram interviews, because we hadn’t done any real Instagram Live shows at the Post. 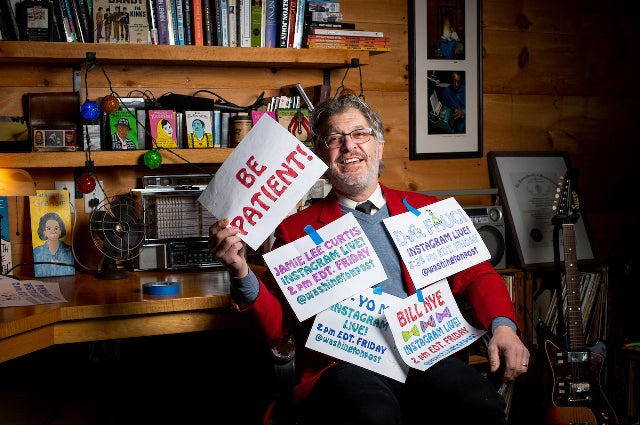 Handmade signs are part of the plan for Geoff Edgers’ Instagram Live show. Photo: Alonso Nichols
We decided to start by having me reach out to everyone who I thought was interesting. I didn’t really have a definition for what I thought was interesting, other than people I’d want to talk to. Many of them said no, but then an odd group of people said yes: Tiffany Haddish, Annie Lennox, Yo-Yo Ma, Kareem Abdul-Jabbar, David Byrne.

So I was ready to go, although some kinks had to be worked out. I didn’t understand how to do a live interview; I’m not really a talk show host. My wife told me, “Stop yelling so much and listen more to what the people are saying.” And technologically, I’ve had some issues. With Katie Couric, my feed kept freezing, and I ran into the house and tried to connect from there, even as we were talking. She was really nice, and talked me through it. But I was panicking and covered in sweat.

You have some unusual items in the background—a 1917 Royal typewriter and a throwback to the 70s, a “space ball” Weltron 2001 radio 8 track player.

I’d already been working out of this remodeled space since 2014, so transitioning to Instagram was really mostly a technological shift. My daughter Lila makes me these hand-lettered signs with colored markers. I did ask my editor if we should get the graphics department make something and she said no, let’s keep them.

And so that helps me, I think, convey what we’re all about. There is something authentic about the show. As for my props—they are weird, but then I think they ground me, and sometimes I incorporate them into the show.

Your guests seem comfortable and go with the flow; they open up and talk about themselves in ways that is refreshing.

When you’re in a situation where you’re just talking, you can’t always do the “show don’t tell” approach. That has limited what I do during the pandemic. But I’ve found that once you establish a rapport, you can have a great conversation.

It’s a little bit of a lifeline for them as well as me. There’s a reason these people are going online and doing Instagram Lives. It’s because they’re also craving human interaction. It’s a relief to talk with somebody who might be going through the same thing and to find it an interesting conversation.

It sounds like you have the dream job. I don’t know if you ever thought you would have that when you started out at the Sudbury Town Crier?

I think all the time about how lucky I am. When I was at Sudbury Town Crier, I made $17,000 a year. I worked 100 hours a week and I lived with my parents. I thought if I could get to the Middlesex News, I’ll be set for life. So to be able to go from that to walking along the Hudson River with David Letterman is a big deal. Or when Yo-Yo Ma, who is the ultimate definition of world-class musicianship, is playing “Ave Maria” on Instagram, I think, “Boy, I’m lucky to be here.”