Mending the Hearts of a Beloved Dog Breed

Boxers are prone to heart disease, but veterinary cardiologists at Cummings School are researching clues that may lead to improved diagnosis and treatment 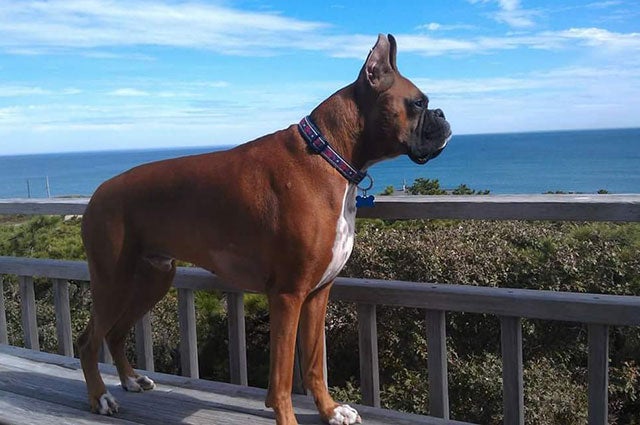 Suzanne Cunningham, a veterinary cardiologist and associate professor at Cummings School of Veterinary Medicine, loves boxer dogs, but they’ve been breaking her heart since she was a child.

As a breed, boxers are prone to a type of heart disease called arrhythmogenic right ventricular cardiomyopathy (ARVC), which humans can get, too. It’s a disease of little junctions between heart muscle cells called desmosomes. The desmosomes weaken, and the heart cells pull apart, leaving scar tissue. The disease can go undetected in people and dogs without symptoms, leading to abnormal heart rhythms, enlargement of the heart, and even death.

“This disease is so frustrating because sometimes the first clinical sign is sudden death,” said veterinarian Luis Dos Santos, a cardiology resident who works with Cunningham. “The pet owner may not even know their dog had cardiac disease that was potentially lethal.”

Cunningham was nine years old when she lost her first boxer suddenly to heart disease. She lost another beloved boxer, Tyler (pictured above), to ARVC a few years ago. The desire to prevent such a loss from happening to others has inspired her to research ARVC.

“Tyler was the most amazing animal I've ever known. I know what people go through, and it just tears you apart,” said Cunningham. “Anything that we can do to improve detection or treatment of the disease is really what we're after.”

The standard screening for ARVC in boxers involves a combination of family history, data collected by a wearable 24-hour heart monitor, and an ultrasound of the heart called an echocardiogram. Most of the time, ARVC isn’t detected until a boxer is 5 or 6 years old, which is after many dogs have already been bred. Screening with the standard methods may not reveal a problem until after the dog has been bred and passed on the disease to more dogs. 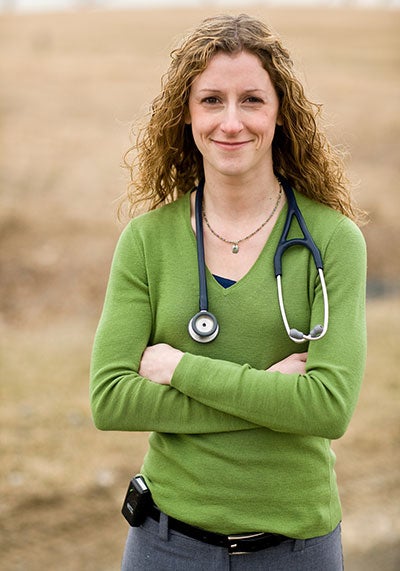 Veterinary cardiologist Suzanne Cunningham was nine years old when she lost her first boxer suddenly to heart disease. “Anything that we can do to improve detection or treatment of the disease is really what we're after.” Photo: Alonso Nichols/Tufts University

In 2018, a study published on ARVC in human patients offered a clue to further Cunningham’s boxer research. Nearly all the ARVC patients in the study had a type of antibody called anti-DSG2, which patients without ARVC did not have. The study’s senior author, Robert Hamilton, a pediatric cardiologist specializing in ARVC in Ontario, Canada, shared the results with Cunningham for consideration in her boxer research.

“In addition to Hamilton’s initial study of human patients, they also looked at a small population of boxer dogs with the disease. They found that nearly all those dogs had this antibody, and the normal dogs they looked at did not,” said Cunningham. “But that was a preliminary, observational study in boxers. Given the high incidence of ARVC in the breed, there's a lot of testing that goes into showing that a dog is ‘normal’ and does not have ARVC.”

Wanting to dive deeper, Cunningham and Dos Santos launched a clinical trial with funding from the American College of Veterinary Internal Medicine (ACVIM) to identify the potential biomarker in boxers, which, if successful, could possibly allow boxers to be screened earlier in life—which could help reduce the prevalence of the disease in the breed and allow for improved monitoring and treatment for individual pets.

The study by Cunningham and Dos Santos looks at a larger number of boxers—twenty dogs with ARVC and twenty normal dogs—and they conduct all the necessary tests to make sure the dogs do not have evidence of ARVC, including the heart monitor, echocardiogram, and blood work. “Although the testing only shows whether there is evidence of the disease at that time, we enrolled dogs of the age where you would expect ARVC to start to rear its head, if they were going to have it. Our affected dogs have very concrete evidence of ARVC,” Cunningham said.

Boxers that have ARVC are treated with medication, including drugs that treat abnormal heart rhythms. Many boxers will respond well to medical management, said Cunningham, but the condition can be more difficult to control in some pets, which may need multiple medications.

A Big Dog, and a Lasting Gift

One of those dogs was a boxer named Ajax. Ajax’s owner, Kim Pallotta of Weston, Massachusetts, first brought Ajax to Cummings Veterinary Medical Center years ago because he was having trouble with his knees. But the surgeon who examined him heard an irregular heartbeat and called Cunningham over to take a look.

“Ajax was one of the largest, most majestic boxers I've seen—not overweight, just big,” said Cunningham. “He was walking around with ventricular tachycardia—frequent, premature heart beats at a very fast rhythm. It could have been life-threatening at any time, and he was totally asymptomatic for it.” 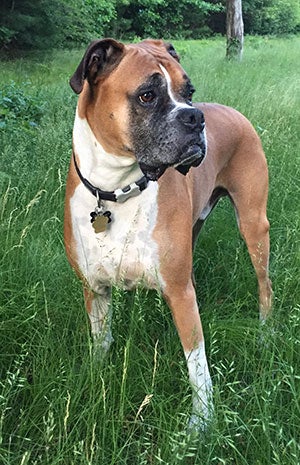 “Ajax was walking around with ventricular tachycardia—frequent, premature heart beats at a very fast rhythm. It could have been life-threatening at any time,” said veterinary cardiologist Suzanne Cunningham. Photo: Courtesy of Kim Pallotta
Ajax also had an enlarged heart and needed lots of medical adjustments over the years after his diagnosis. Despite everyone’s best efforts, Ajax still passed away suddenly in 2018.

“He broke my heart,” said Pallotta. “But Dr. Cunningham held my hand through all of it, which was really wonderful. What struck me is that somebody who works with animals and deals with sad situations every day could still have so much compassion.”

Pallotta wanted to do something to honor Ajax and help other boxer owners, so she established a fund in Ajax’s memory. ARVC and other heart disease medications and treatments can be expensive, she noted, and some of the funds could be used to help owners who otherwise could not afford care.

“I felt like I was really lucky to stumble on somebody that was doing actual research, and they gave me those last few years with him. Ajax had a lot of fans, and this will help his memory live on,” she said.

The funding also enabled Cunningham and Dos Santos to further their research and purchase new diagnostic software that enables them to use ultrasound to get a 3-D view of a dog’s heart.

“We can gather different views from the heart in one single beat, then we can reconstruct the heart using a specific software,” said Dos Santos. “With this, we have better views and measurements of cardiac size and function, and specifically the right ventricle, which is usually where the disease affects boxers.”

“It's been rewarding in several different ways,” Dos Santos said. From a diagnostic perspective, the imaging technology will further the cardiologists’ understanding of how the right ventricle works in normal boxers and in those with ARVC. From a teaching perspective, he said, “students have access to an image that they would never see anywhere else.”