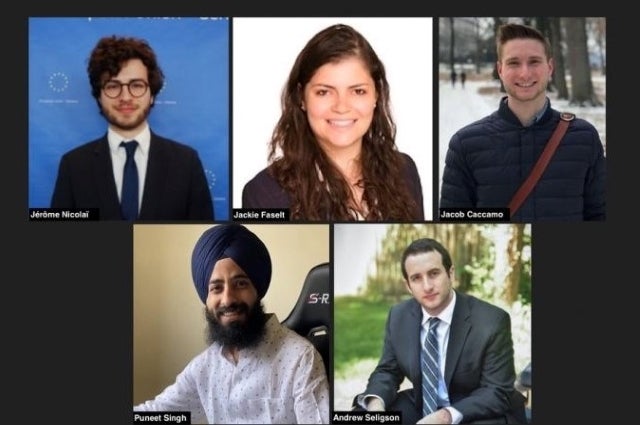 They call themselves FSociety, after the revolutionary hacker group in the cult TV show Mr. Robot—with a knowing wink toward The Fletcher School. Over the past two years, the school’s cyber whizzes have pulled off a revolution of their own, beating out the likes of Harvard and West Point at a trio of international competitions to find the best defenses against online dangers.

The group’s early goals were modest. When four students entered their first competition in New York in November 2019, they figured they would at least enjoy a weekend in the city. “If we didn’t make it past the first round, we were like, okay, we can go to a museum,” says team member Jackie Faselt, A17, F21. “Little did we know we’d be up all night.”

The team ended up winning first place, and since then, a rotating cast of members has won two other competitions, along with cash to make their ideas a reality.

Like a hackathon for policy geeks, the competitions pit technical creativity and political strategy against simulations of foreign hacking, election interference, social-media doxing, and other digital threats that increasingly dominate the news. At the same time, they allow students and start-ups the chance to test themselves in the Wild West of cyber conflict. 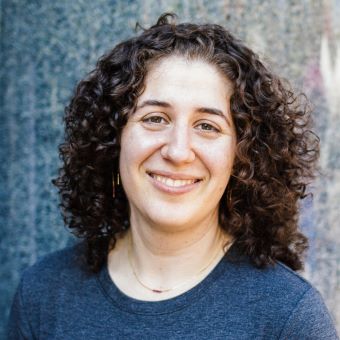 “One of my biggest hopes is to help train a new generation of policymakers who will feel comfortable with these technological issues,” says FSociety faculty advisor Josephine Wolff. Photo: Patrick Gage Kelley
“It’s exciting because this is a new domain where everything is being figured out now,” says Faselt. “Norms are being established and broken, and rules and regulations are being written on the fly.”

For faculty advisor Josephine Wolff, the contests are an important way to raise visibility in an area where policy is too often written by politicians with limited cyber experience. “One of my biggest hopes is to help train a new generation of policymakers who will feel comfortable with these technological issues,” says Wolff, an assistant professor of cybersecurity at Fletcher.

FSociety’s secret weapon, she says, is the Tufts community’s diversity of perspectives and skills—combined with its practical focus on helping people on the ground. “There are people at Fletcher studying technology and cybersecurity, but there’s also a much broader curriculum,” she says. “That often leaves them good at working in groups of people with very different skillsets.”

A voter registration database has been infiltrated; at the same time, someone has stolen biometric data from passengers at LaGuardia Airport. That was the scenario presented to teams at the annual Cyber 9/12 Strategy Challenge by the nonprofit thinktank the Atlantic Council, which asked participants to prioritize the risks and determine if and how they were related.

The FSociety team of Faselt, Ben Ballard, F20, Melanie Barlow, F20, and Andrew Seligson, F21, rightly determined that the election interference was a hoax, but still had to contain the public relations fallout as they went after the real threat of the biometric data hack. Up against teams from Wellesley and the Harvard Kennedy School in the final round, the team had 30 minutes to decide whether to extradite the perpetrator from Hong Kong and risk an international incident. FSociety opted for the most aggressive approach.

“The judges told us our answer wasn’t necessarily the best or even the right one,” says Seligson. “But we presented the best case for why—analyzing all of the different legal, political, and technical issues.”

The first-ever cyber competition sponsored by the United Nations and Microsoft, Apps 4 Digital Peace, came with a broad mandate: to decrease conflict and increase security online. FSociety met the challenge by designing a user-friendly security platform named AllSafe, that small businesses, nonprofits, activists, and journalists could use to defend themselves against cyber threats such as identity theft and online harassment.

“There was no way we could compete with these enterprise-level threat-intelligence platforms, but no one was thinking about these smaller organizations that lack the resources to protect themselves online,” says Faselt, who was part of the first-place FSociety team with Seligson, Jacob Caccamo, A17, Jérôme Nicolaï, F20, and Lewis University’s Puneet Singh. Users would customize the platform based on their industry, role, and potential threats; when an attack occurred, software would walk them through possible responses, educating them at the same time it defended them.

Beating out teams from around the world, FSociety won $15,000 to turn its mock-ups into a real dashboard, which Seligson calls “Superman for the little guy.”

First responders and military strike teams face unique challenges in dense, urban environments, where buildings and walls obscure vital information, and the presence of civilians poses unique hazards. The US Department of Defense’s National Security Innovation Network challenged competitors in the Seeing into the Unknown contest to create a new system for helping those teams succeed.

FSociety proposed a swarm of autonomous drones, which could quickly fan out to create a high-definition map of a threat zone—whether a burning building, a subway collapse, or an urban hostage situation. The seven-member team of Tufts and Fletcher students and alumni pulled together artificial intelligence, LIDAR (a method for measuring distances using light), and other technologies to create their solution.

FSociety beat out more than 300 teams, including established engineering firms, to become one of three winners of $15,000 and a defense contract to create a prototype.

Throughout the competitions, Seligson says, their competitive advantage was that they didn’t expect to win. “Therefore we were willing to work hard and fast and not take anything for granted,” Seligson says. “The fact we progressed in this way has shown me that if you put your best foot forward and act scrappy, you can find success.”