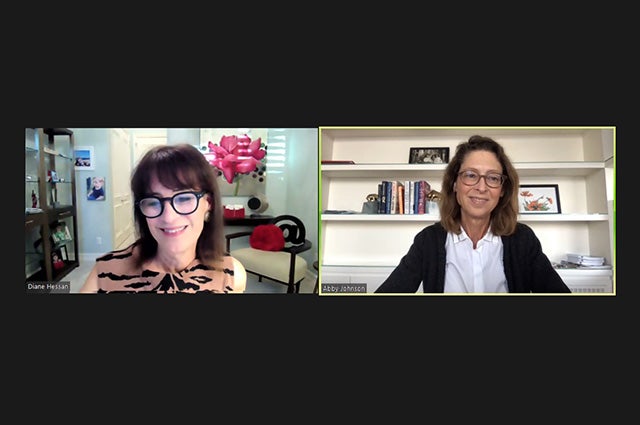 The way to succeed in the financial services industry isn’t necessarily about being the best person with numbers; it’s about being smart, flexible, and a critical thinker, Fidelity Investments chairman and CEO Abigail Johnson, A17P, A20P, told a Tufts audience last week.

In an online event hosted by the Tufts Financial Network on Feb. 2, Johnson spoke with Diane Hessan, J76, A11P, a Tufts trustee and founder and chairman of global customer agency C Space, about her path to working at Fidelity, best business practices, and how the firm adapts to change. She also fielded questions from current students and recent alumni.

Johnson started working full-time in 1988 at Fidelity—which was founded by her grandfather in 1946—and has served as CEO since 2014. Fidelity has 35 million individual investor customers, and $9.8 trillion in assets under administration. It executes 2.2 million trades daily and employs 47,000 people.

“Abby is also, most importantly,” said President Anthony Monaco, in his introductory remarks, “the mother of two daughters who both graduated from Tufts University.”

“It was fabulous being a Jumbo parent,” Johnson said. “I really have always loved being part of the Tufts community.”

Johnson shared her thoughts about best practices to keep a business strong and moving forward, the importance of trying different strategies, women in the financial services industry, and how being a liberal arts major is an asset.

Build a culture of “scan, try, scale.” At Fidelity, managers scan to see what’s going on in their industries and across society. “Based on everybody’s contributions about what they see changing, what can we try that would be something new and different?” Johnson said. Not everything they try works. “Some of them are good ideas, but at the wrong time, and we just move on to the next one. And some of them have to be reworked multiple times.” For ones that do work, they get tested on a small scale, and then “we try to figure out how to make them big.”

Keep trying until you find the right strategy. Back around 2012, Johnson and others at Fidelity decided to investigate Bitcoin and blockchain technology as potential investments. “We came up with a list of 52 use cases that we thought might be interesting,” she said. The first related business they launched—a crypto custody business for institutional investors—“was not even one of those 52 use cases,” she said. “What we discovered was that we were uniquely positioned to be able to do that. Now we’ve got a lot of other things in the queue.”

Bringing women into financial services. “There are a lot of great reasons why anybody—but particularly women—should consider doing something like being an analyst,” said Johnson, who started as an analyst at Fidelity. “It’s a very independent kind of a job where you set your own direction on a day-to-day basis. You have a lot of demands and a lot of deliverables, but you actually have a lot of control over planning your time. You obviously have to be responsible and deliver your results, but there are a lot of different ways that you can do that.”

Leadership traits that matter. “We expect all of our Fidelity associates to be customer obsessed,” Johnson said, meaning always looking for what’s going to be the best thing for the customer. “That sense of accountability is really, really critical.” And in such a large business as Fidelity, prone to having silos and different camps, “thinking and working across the organization is really important—trying to take the perspective of other groups around the company.”

Candid debate is critical, too, like what liberal arts students are used to in classes and seminars, Johnson said. A really important leadership principle at Fidelity is “taking smart risks and practicing pace over perfection,” she said. “Keep moving, don’t get hung up on being a perfectionist.” Helping to empower teammates or those new to the organization and coaching other people to their full potential is also critical, Johnson said. “Coaching them in a sensible way is an important leadership skill.”