Building a Framework for Inclusion 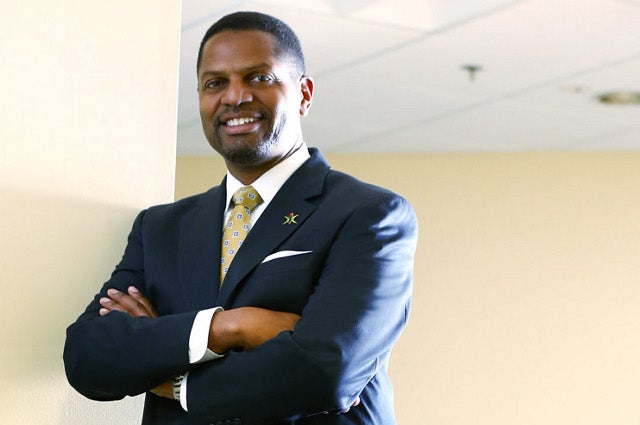 To address the issues of diversity, equity, and inclusion in society and in higher education, taking a systems approach—drawing on perspectives for building complex structures—is critical, Karl Reid, A22P, executive director of the National Society of Black Engineers, told a Tufts audience last week. Only that can create a lasting and supportive culture for all members of the university community.

Reid was the featured speaker in the School of Engineering’s Colloquium on Diversity, Equity, and Inclusion held virtually on Feb. 5. For more than two decades, Reid has championed diversity, equity, and inclusion issues and advanced key strategies so that low-income and underrepresented youth gain greater access, opportunity, and success following high school.

Before being appointed executive director of NSBE in 2014, he held positions at the United Negro College Fund and at MIT, as well as in high tech. In April he will become senior vice president and chief inclusion officer at Northeastern University.

With undergraduate and master’s degrees from MIT in materials science and engineering, Reid drew on his doctorate in education from Harvard to create an “inclusivity framework” for broad and agile strategies that build diversity, equity, and inclusion—a model that takes a systems standpoint, because “that’s what engineers do,” he said.

“The campus climate, values, behavior, and norms all have an effect on a person’s ability to perform at very high levels,” said Reid, stressing the need to build “a creative environment where people can bring their whole selves into the university... so that psychologically they can feel that they can be freed up to intellectually engage.”

The National Academy of Engineers lists 14 grand challenges for the 21st century to solve, and Reid said he has a 15th challenge: reversing the underrepresentation of Black and Latinx people in engineering. Trying to solve the other grand challenges without these engineers, he said, effectively leaves some of the country’s most talented students “on the bench.”

“We can’t afford to do that anymore,” Reid said. “We really have to push to ensure that every person’s mind and capabilities can come together to solve the extant problems, but also to define the problems to be solved as well.”

Reid framed the urgency of that mandate by recalling the “watershed moment,” the death of George Floyd on May 25, 2020—a day when “systemic racism and the dehumanization of African Americans was on display in broad daylight. That somebody can kill another person with impunity and not expect any retribution—it was the equivalent of the 1965 ‘Bloody Sunday’ Selma to Montgomery March, where nonviolent activists were beaten in broad daylight, and some later killed, and it became a national wake-up call.”

That wake-up call has underscored the importance of diversity, equity, and inclusion in society, he said, with diversity seen as a first step towards fulfilling “Dr. King’s dream of inclusive excellence,” said Reid. “The ‘I Have a Dream’ speech is a dream about inclusion. You need diversity in order to have meaningful interactions to mitigate our own implicit biases and create a more inclusive culture.”

Still, said Reid, it is difficult to bring about profound, fundamental change without a close understanding of why it is difficult. Barriers include individual inequity, such as “when we bring prejudgment or bias or stereotypes or generalizations to a group or an individual based on their race,” he said. “We carry those biases, both explicit and implicit, many of which are shaped by our culture, and they influence our behaviors and our attitudes toward individuals.”

Individuals, in turn, have given rise to institutional inequities through policies and practices “that work in many cases unintentionally or inadvertently to benefit white people to the detriment of people of color,” he said. Others then perpetuate structural or systemic inequities—“the interplay of policies and practices and programs that occur within the context of a racialized historical cultural conditions.” These factors are pervasive, he said, reaching into the criminal justice system, health care, employment and housing, land ownership, and privilege-based educational systems.

A Spirit of Belonging

Difficult conversations that we’re having now that raise awareness of individual and embedded bias mark encouraging progress, Reid said, leading to “changes in individual perspectives, individual biases, both explicit and implicit.” These change agents will then work to dismantle the structures that have reinforced racism. “Institutional racial inequity is in the air we breathe, and the degree to which we . . . step back and think about it and work to dismantle it, that’s when systemic changes will take place.”

Reid recommended that the Tufts community hold conversations about race and equity with university leadership, “and then diagnose and teach to diverse learning styles as well. And then finally, facilitate out-of-class time with teachers and faculty so students can engage with faculty and teachers, and demystify the institution,” he said. “That should be engineered. That should be intentional so that students can forge relationships with faculty and others outside of the classroom.”

Aligning resources in that positive direction, he said, defines the work of his organization, the National Society of Black Engineers, focused on increasing the number of engineering degrees awarded to students from underrepresented backgrounds. In partnership with the Society of Women Engineers, the Society of Hispanic Professional Engineers, and the American Indian Science and Engineering Society, together they launched the 50k Coalition, a national network of institutions working collaboratively to produce 50,000 diverse engineers annually by 2025.

As he looks ahead, Reid said his vision for change is inspired by the work of Robert Sellers, the vice provost for equity and inclusion at the University of Michigan, and he recited a Sellers’ quote: “Diversity is being invited to the party. Equity is when everyone gets to dance. Inclusion is when everyone contributes to the playlist.”

But then he went on to adapt the quotation by adding the word belonging. “Belonging is how you feel even after you’ve left the party,” he said, and by extension, is a lasting measure of progress, as this level of inclusion sustains and strengthens the human potential.

Editor’s Note: The university wants to acknowledge that during the colloquium on Feb. 5, an event attendee used Zoom’s annotation feature to scrawl a racist term across the slides that Dr. Reid was presenting. Via an mail to the entire Tufts community the following day, President Anthony Monaco extended an apology to Dr. Reid for the “despicable racist incident” that interrupted his online delivery of the colloquium.

The Tufts University Police Department has launched an investigation; Tufts Technology Services is assisting in the investigation and is also reviewing online event practices to reduce the likelihood of a similar incident happening again.

On Feb. 8, in response to the incident, the university held a community meeting focused on healing, reflection, and action. In that meeting, Jianmin Qu, dean of the School of Engineering, called the incident “insidious and intolerable.” Qu added, “The openness of our gathering places a responsibility on us to provide a safe and secure forum to conduct such discussion. We will continue with our DEI colloquium series and we will be more vigilant with our security measures for these events.”