Tufts dental students find a way to reach and teach kids in Lebanon, even in troubled times 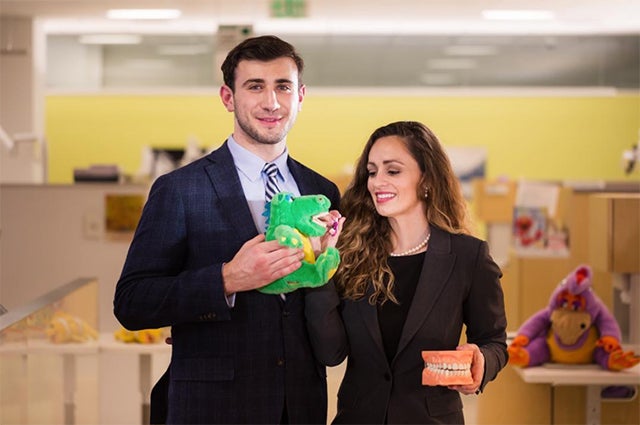 A couple of years ago, dental students Omar Harmouche and Alia Osseiran set out to develop a way to teach children in Lebanon, a country where they each have family ties, about oral hygiene and other healthy habits. Since then, the Middle Eastern country has faced political unrest, a deadly explosion at the port of Beirut, and, like the rest of the world, the COVID-19 pandemic. All of which might serve to derail a long-distance public-health effort.

Yet Box for Health, the nonprofit company launched by Harmouche, D21, MG21 (MPH), and Osseiran, D22, has already reached more than 4,200 Lebanese youngsters—four times their goal—with original oral-health curricula and sustainable dental products. They have partnered with a half-dozen NGOs, received mentorship from the Clinton Global Initiative University and Tufts Venture Accelerator, set up a Shopify store to generate funding, and nurtured a devoted cadre of interns and volunteers.

Harmouche was born in Lebanon and came to the United States at age 11. Osseiran’s father is from Lebanon and she has visited relatives there often. Both were aware of the gap between the health knowledge available to Lebanese children and that available to their counterparts in more affluent nations.

“Unfortunately, in many Middle Eastern countries, including Lebanon, not enough attention has been given to the importance of oral health for children,” says Professor Wael Att, Harmouche’s mentor at the School of Dental Medicine and chair of the prosthodontics department. According to data from the World Health Organization, children in Lebanon show significantly higher rates of decay and dental disease in primary teeth than children in Europe and the United States.

“Once we started, it felt like the project was leading the way,” Harmouche says. What was little more than an idea during his first year in dental school very quickly became a distinct possibility when, with the help of Att and Hend Alqaderi of Harvard’s dental school, Harmouche found himself with the unexpected chance to present his idea for a children’s oral-health project at the Beirut International Dental Meeting in October of his second year. While in Lebanon, he met with officials at the Ministry of Health, who liked his vision and suggested he return with organized support behind him.

Back in Boston, Harmouche entered Tufts’ dual-degree DMD and Master’s of Public Health program. And Osseiran, who already had an MPH from Boston University and experience working at start-ups, joined the effort. As part of Harmouche’s applied learning experience for his M.P.H., he planned to travel to Lebanon and launch the children’s oral-health project at two orphanages in early 2020.

COVID-19 forced a change of plans. “We didn’t even second-guess if we’d keep moving forward,” Harmouche says. “We still had to deliver health to kids, even during a pandemic.” But the education program now needed to be delivered remotely. Harmouche set to work writing an original curriculum on oral health and other healthy habits for K-5 students, later translated into French, one of the languages used for instruction in Lebanese schools. “We want every single child in the entire country of Lebanon to know how to brush their teeth and wash their hands,” she says. “These skills are lifesaving.”

Late last year, Box for Health sent a 20-foot cargo container to Lebanon filled with humanitarian supplies—nonperishable food, winter clothes, and infant- and women’s-health products. And, undaunted by a world of unknowns, the founders have begun to establish partnerships for similar ventures in Ivory Coast, Burkina Faso, Pakistan, and Nigeria.

“This is literally my dream,” Harmouche says. “When I was a kid, this is the work I envisioned myself doing.”

What’s It Like to Be a Dentist in Rural New England?

Oral Surgery Doesn’t Have to Scare You

All the Presidents’ Teeth