Casting a Critical Eye on Images that Perpetuate Racism 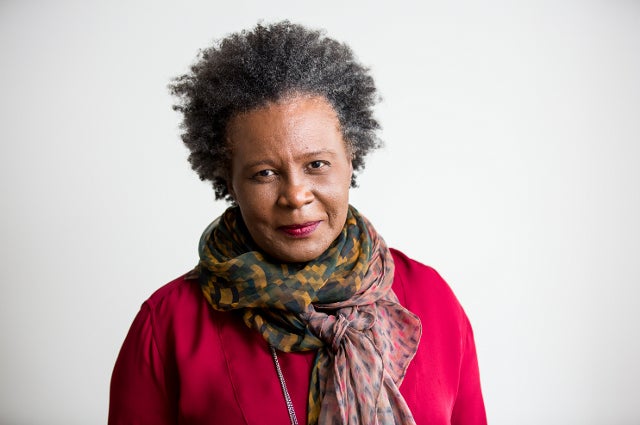 Claudia Rankine may be best known as a celebrated poet, but observers of contemporary art know her gift for merging words with the visual arts that critically views a culture whose consciousness is shaped and informed by racism.

In a talk to a Tufts audience last week, Rankine elucidated how images spanning 19th century daguerreotypes of enslaved people taken as part of a racist “scientific” study to viral videos reaching thousands via Facebook and Twitter exert pressure on and shape a society that has privileged whiteness and white supremacy.

Rankine, giving the Leo and Betty Beckwith Lecture on Feb. 11, underscored the intersection of attitude, belief, bias, microaggression, and violence with what we see in photographs, videos, social media, and newspapers, among other media. The annual lecture, founded in 1978, brings the leading voices of contemporary art to the School of the Museum of Fine Arts at Tufts University community.

“Running alongside systemic racism, from slavery to Jim Crow, to mass incarceration to continued segregationist practices and modes of assault, are the uses of images to insist on the degradation of Black people,” said Rankine.

Throughout Citizen, artwork extends, expands, and deepens text “that Rankine offers us to see and feel the experience of being Black in America right now,” said Dina Deitsch, gallery director and chief curator, in introducing Rankine to the Tufts audience. “The space she gives to and shares with the visual arts . . . stands out as one of the hallmarks of her work as a poet and a writer.”

Rankine, who co-founded the Racial Imaginary Institute in 2016, centered her talk around “the question of what should be used and what can be used.”

Rankine amply illustrated two approaches to that usage: contracirculation and counternarrative. Contracirculation, she said, is a term that refers to how images are circulated differently than intended, as defined by writer Marielle Ingram, while counternarrative reads the image event differently than first presented, an approach illustrated by multidisciplinary artists such as Alexandra Bell. Her work includes a reframing of the Black narrative as communicated by the choices of headlines, photography, and layout of the newspaper front pages.

Scholars like Harvard art historian Sarah Lewis have made significant contributions to the intersection of African American and Black Atlantic visual representation, racial justice, and representational democracy in the United State, said Rankine. Lewis guest-edited “Vision & Justice,” a special issue of Aperture magazine (May 2016) that sparked a national conversation on the role of photography in constructions of citizenship, race, and justice.

As Rankine also noted, such momentum carries on work begun in the 19th century by abolitionist Frederick Douglass, who embarked on his own “rerouting of our visual literacy regarding the white imaginary of Blackness,” she said, “by becoming the most photographed man of the 19th century.”

She quoted Douglass’ 1861 lecture on pictures, “‘that the great cheapness and universality of pictures must exert a powerful, though silent, influence upon the ideas and sentiment of present and future generations.’”

“So this man photographed himself a lot, so we can have something to counter the other images being put forward of what Blackness should present itself as,” said Rankine.

Lynching photographs and postcards circulated between 1880 and 1940s, and were most the most egregious examples to counter, she said, showing some of the original photographs that had been sent through the U.S. mail. “So that’s also a collusion with the American government as to what should be normalized in the psyche of Americans,” she added.

She cited work by artist Kerry James Marshall, who re-appropriated a well-known black and white photo of a 1930 double-lynching, isolating close-ups of three white women’s faces from the mob in lockets hanging from chains, effectively “redirecting the gaze” from the victims onto the white people, “who really should be considered the spectacle in this photograph,” said Rankine. “That they are there, that they’re willing to be photographed in a position of exhibiting inhumane behavior should suggest that they themselves are inhumane.”

Rankine recognized that “offending images” such as these are not easy to look at or to contemplate. For contemporary writers, artists, and spectators, she said, referencing an image “without replicating the trauma of the event becomes the issue. That, for me, has been one of the most crucial and motivating thoughts as I make my work. How do you represent the thing legitimately and not replicate the trauma in so doing?”

She offered, by way of thinking through that question, newspaper photos of Carolyn Bryant—the person who accused Emmett Till of whistling at her; 14-year-old Till was brutally murdered on August 28, 1955, by Bryant’s brother and husband. Bryant would later admit she had lied, and Till’s killers were acquitted.

“This newspaper account holds the place of being considered one of the most important images in the sense that it was able to ignite the Civil Rights Movement,” she said. “There’s always a sort of moment when the unbearable really becomes unbearable. Till’s mother’s decision to publish these photographs [of Till’s mutilated corpse] got people organized around this kind of brutality.”

Rankine’s comments during a question-and-answer period touched on the subtle power of language to both hide and reveal, as information is continually imbibed by a social-media hungry public—and one with implicit blind spots.

“What language has been made to do up until now is account for racism without racists,” she said, citing Teju Cole’s “White-Savior Industrial Complex” nuanced essay in The Atlantic. Language and images are continually rerouted, she said, to suit situations and beliefs. “We route the stereotypes that go with it,” she said. “We route and unearth the ways it has been used to be violent in the past.”

A precise love of language is the natural provenance of a poet, and it is task that keeps Rankine her own keenest critic, she said. “Ideally I want the work to be an open text,” she said, sharing her hope that those teaching it will bring in supporting texts that expand and counter on what is presented.

“One of the reasons I love image-text relationships is that they automatically open up a dialogue on the page, and so there is not even the pretense that we can close this down and lock in meaning in any classical way,” she said.

“I’m not here to tell people what they should do or should not. You never know what you’re going to do and you never know where you’re going to find inspiration that is, in itself, groundbreaking,” she added. “But I am interested in good scholarship. I am interested in people asking questions and not taking things for granted and being aware that the centralizing of whiteness gets in the way of seeing clearly.”