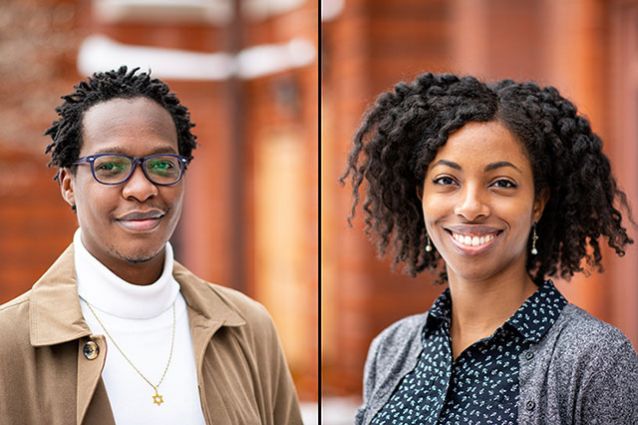 Students join The Fletcher School Africana Club for many reasons—they may be from Africa, volunteered there, or have a professional focus on the continent. But at the heart of it, there’s one core reason: They support the club’s mission to further understanding of issues related to Africa and African culture.

“Africana Club is an inflection point where you can learn about the continent,” said David Mbai, F21, the club’s co-president. “It's for everyone and anyone who has an interest and wants to learn more.”

Sabrina Rose, F21, also co-president of Africana Club, joined because she’s passionate about climate change and improving food systems in Africa, where countries are struggling with rising temperatures and increased rainfall. She and David recently spoke with Tufts Now about the importance of connecting what's happening on the continent with Tufts students.

Sabrina Rose: Black Lives Matter has taken many forms and amplified other movements that were ongoing. Eliminating police brutality is central to Black Lives Matter, and many people have protested police brutality in Nigeria, Zimbabwe, Zambia, Kenya, and South Africa. The African Union made a statement condemning George Floyd's murder and called on the United States to take more action against racism.

David Mbai: There is a similarity between Africa and the U.S. in that Black people are fighting back against a power structure that’s oppressing the citizens of a country. In Africa, Black Lives Matter is more focused on colonialism and the roots of this competition between the police and citizens. We can't say it's based on race, because it's a majority Black continent, but the issue is still that police hold power over citizens.

In Nigeria, citizens protested against a police organization called the Special Anti-Robbery Squad, or SARS, which was designed to combat crime. But that power was abused, and protests began that were similar to the Black Lives Matter ones. To a certain extent, Nigeria’s protests became more visible to the world because of the U.S. protests in the wake of George Floyd's death. In Kenya, where I’m from, there have been several protests related to the police and their misuse of power. There's no trust between the police and the citizens of the country.

How does the Africana Club work to encourage diversity and inclusion at Tufts?

Sabrina: I remember going to a town hall event where Fletcher School staff, faculty, and students were talking about diversity, equity, and inclusion, and I asked what the admissions department was doing to make the student body more diverse. They said there were some collaborations with clubs on campus, so I reached out and, with a couple of other students, we were able to have a panel for prospective students that was focused on diverse perspectives and brought together students of color to talk about their experiences at Fletcher.

It was just one example where the administration was open to having more conversations like that for prospective students. We got questions about what it’s like to be a student of color at Fletcher, what opportunities there are for community, what the faculty support is like. And it was really great to have that dialogue.

David: We've also worked well with other organizations at Fletcher, including the Ralph Bunche Society, which focuses on diversity in international relations and provides a space for students to discuss issues of race and culture. I work for Fletcher LEADS, and they put on events last semester, along with the Hitachi Center for Technology and International Affairs, where they invited speakers to talk about Black issues in the U.S. that go beyond the Black Lives Matter movement. We'll continue to have those relationships going forward.

In 2020, we planned a week-long trip over spring break to Kenya. Even though we couldn't go because of the COVID-19 pandemic, I still feel the group was able to get behind a new tradition of a trip to Africa. We're trying to think of ways to keep that momentum and transfer that institutional knowledge to the next group of students who would be able to go. We knew what we were planning was a part of a greater legacy, which is true for everything we do for Africana Club.

How will you apply your professional expertise to benefit the continent of Africa?

Sabrina: I've always been passionate about climate change. As an undergrad, I studied engineering and minored in environmental management. I wanted to apply my technical background to environmental issues. As I learned more about climate risks facing the continent, although African countries have historically contributed the least to climate change, I realized this is where I wanted to make an impact.

After I graduate this year, I plan to stay focused on climate change and food systems. I hope to work as a policy analyst or consultant with a development bank or the United Nations Development Programme.

David: I studied politics as an undergrad in the United Kingdom, then moved back to Kenya. I started working in Parliament, which expanded my vision of what I wanted to achieve in my career. I'm studying international communications because I want to work in foreign policy, maybe rise to a cabinet-level position, and share my views and opinions around policies. Fletcher is the perfect place for that.

I’m also focusing on security studies, as Kenya has had issues with terrorism in the past. When the U.S. embassy was bombed in 1998, my mom and I had been there the day before getting visas to come to the U.S. We had the Westgate mall attack in 2013. And in January 2019, there was an attack at a hotel, where my mother and I go quite frequently. Those events stay in my mind a lot and led me to focus on security studies.