Gabrielle Milton, D23, is an artist, activist, and champion of diversity and inclusion efforts at Tufts University School of Dental Medicine

Gabrielle Milton, D23, grew up hearing stories about her family’s experiences with racism in the South. For example, when her grandmother was young, she walked nine miles to school with other Black children because the schools closer to her home were for white students.

“It was really disappointing, because white students on buses would laugh at them while they walked through all different types of terrain and weather just to get to the education that they desperately needed,” said Milton.

And when her great-grandmother was a little girl in Georgia, she went for a walk outdoors one night. She witnessed a Black man being lynched and was so terrified that she couldn’t sleep for three months.Milton, who grew up in Charleston, South Carolina, said that she had a similar reaction to what she called the “modern-day lynching” of Black citizens such as George Floyd and Breonna Taylor. 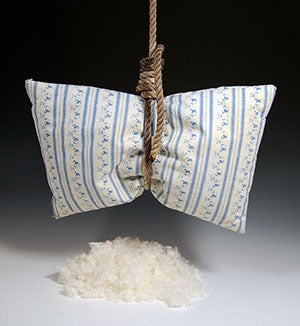 “I couldn’t sleep either,” she said. “When you see so many people dying who look like you, that goes into your stress. It becomes generational trauma and historical trauma, and that leads to the worst health outcomes, which is why I'm so passionate about public health and dentistry.”

Since she was in high school, Milton has used art to express and channel her family’s historical trauma. “Early 1900's Nightmare,” inspired by her great-grandmother’s horrific experience, depicts a noose wrapped around a pillow with stuffing falling out. She recently spoke with Tufts Now about art, activism, and representation.

Tufts Now: Which piece from your collection is your favorite and why?

Gabrielle Milton: “Identity” is probably my favorite because I feel like many Black women can relate to this piece. Growing up, I had chemically straightened hair like many Black women who unconsciously assimilate into white culture and chase European standards of beauty to succeed in American society. 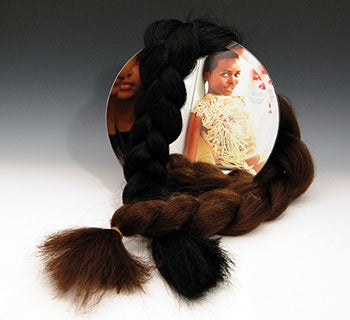 But then I got a bad haircut, which led me to learn more about letting my hair be natural. I cut it all off, and I was constantly bullied—even by family members, because this was before natural hair was as prominent and celebrated as it is now. I posted pictures from magazines of natural Black women, such as actress Lupita Nyong'o, all over my bathroom so I had them to look up to and motivate me.

“Identity” is the first piece that incorporates me—my reflection is on the left—along with the braids that I constantly put in my hair to protect my natural hair. I've been in undergraduate internships with directors who told me if they'd known what my natural hair was like, they wouldn't have hired me. It’s crazy how controversial my natural hair can be.

Black women are some of the most oppressed people, other than the transgender community. Being Black is one thing, but if you're a woman, you're even more oppressed, and if you're part of the LGBTQIA community, then you're further oppressed due to intersectionalities. Black women are taught not to be too vocal, or we'll be seen as angry. It's the most mentally exhausting thing I've encountered in this lifetime. This is a time where we need to empower Black women, listen to Black women, uplift each other, and appreciate our Black women.

How do you channel your activism for Black Lives Matter into your artwork?

In 2015, an unarmed man named Walter Scott was shot by a police officer in his back in North Charleston, South Carolina. Walter Scott was my friend's uncle, and the shooting occurred 10 minutes from my church. I'm an empathetic person, so I poured all the emotions I was feeling into my art. 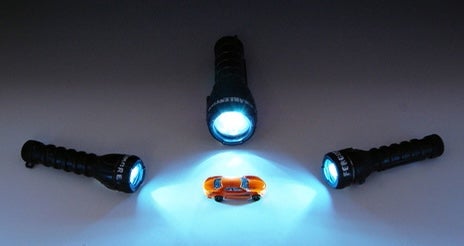 A piece titled “Hands Up” is dedicated to Black men, Black women, and Black trans individuals who encounter police brutality. Each of the three flashlights say Ferguson, because Michael Brown’s killing in Ferguson, Missouri, was a big issue during that time, as well as North Charleston and Baltimore, where Freddie Gray was murdered. I have the three flashlights pointing at a car, because this is how Black people feel when they're stopped by the police. Showing this piece and others at virtual art shows recently helped me raise $600 for Black Lives Matter initiatives.

My mom went so far as to create laminated licenses and insurance cards for all my family members that we keep in the visor in the front seat in case we get stopped by a cop. We reach for that instead of in our pockets or the glovebox, so the police don't think we're reaching for a gun. The fact that my mom had to take these precautions is what's wrong in America. I don't think white moms have to do that.

At Tufts University School of Dental Medicine, you’ve taken on leadership roles in student organizations. How do you use that platform to advocate for diversity and inclusion?

We all have a duty, whatever our platform is, to be vocally anti-racist and demand change. Tufts University School of Dental Medicine is one of the first dental schools in the U.S. to have diversity and inclusion courses in which students sit down to talk about racial issues and trauma within different minority and marginalized groups.

Our school is in Chinatown, so it’s important for us to focus on the Asian community. During a Juneteenth presentation, I talked about why Black people have a negative stigma towards healthcare professionals. We implemented trauma-informed care at the dental school to make sure we are the most culturally sensitive and aware doctors for our patients.

As co-president of the Social Justice Literacy and Advocacy Club, I helped run a voter registration drive where we registered more than 200 people to vote, which was important because the recent presidential election was instrumental in bringing about much needed change.

This year, we have 40 first-year Black dental students, which is huge. As president-elect of the Student National Dental Association, we wanted to make sure they were comfortable. Black dentists make up just 4 percent of dentists in the world. It's hard to aspire to being a dentist when you don’t see dentists who look like you.

The Road to Eradicating Structural Racism at Tufts

Structural Racism Is a Public Health Problem. Measuring It Can Lead to Better Solutions