When an extraordinary cold spell in Texas led to the largest sea turtle stranding in history, here’s how veterinarians, conservationists, and others stepped in to help 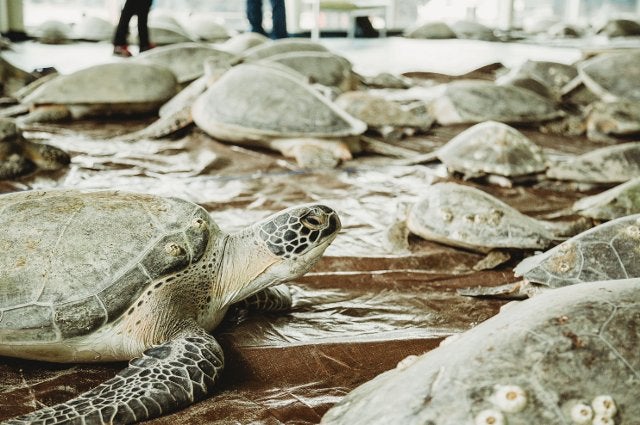 As Texas faced life-threatening cold temperatures and dire power and water challenges in the aftermath of a record-breaking winter storm this month, humans were not the only locals whose health and safety were in peril.

Frigid gulf waters led to nearly 7,000 sea turtles being paralyzed by the cold and washing up onshore. Nearly 5,000 turtles stranded on South Padre Island, where they were brought to Sea Turtle, Inc., a nonprofit conservation center on the barrier island, for emergency care. National Geographic reports that the strandings in Texas represent the largest cold-stunning event ever documented in the U.S.

Sea turtles are like all other reptiles in that they are “ectothermic,” which means all their bodily functions depend on an external source of heat, said Terry Norton, V86, the director of and veterinarian for the Georgia Sea Turtle Center/Jekyll Island Authority. “When the water temperature drops to under 50 degrees Fahrenheit, that’s usually when you start seeing turtles strand. Then if they come up on land, they’re going to get even colder. Their bodies basically just shut down,” he said.

Seeing the turtles in such a crisis was painful to watch for all those who care about wildlife, but it did have one silver lining: the inspiringly humane response.

“The number of people who became involved was, for me, the most amazing thing,” said Thomas deMaar, V86, who has served as Sea Turtle, Inc.’s veterinarian for the past 15 years through his position as senior veterinarian at Gladys Porter Zoo in Brownsville.

Area residents rushed to protect affected animals from the elements, cramming as many turtles as they could find onto boats and trailers and into the backs of SUVs and pickup trucks. The collected turtles quickly filled Sea Turtle, Inc.’s rehabilitation center to capacity and spilled over to completely occupy the island’s convention center.

DeMaar described an astounding scene at the San Padre Island convention center’s loading area, which is normally used for weddings and trade shows. For four days, there was always a row of vehicles waiting to drop off turtles, from morning until well after dark.

Helpers from All Backgrounds

“The volunteers inside the building are sea turtle volunteers and zoo people, and they were the animal people you might expect to be involved,” said deMaar. “But everyone in those trucks showing up outside was someone who just decided to go looking for turtles to help.” 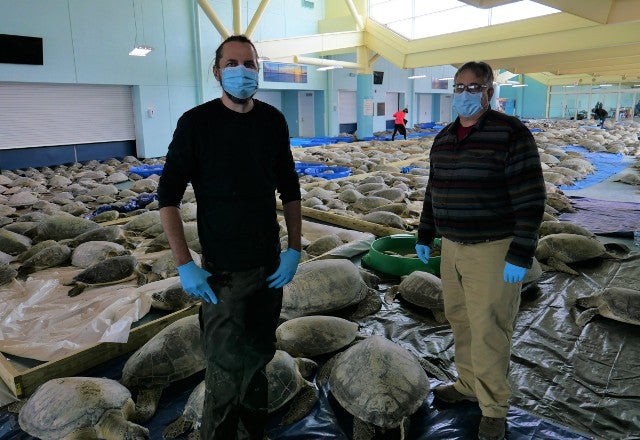 Within just a few days, turtles completely filled the lobby and hallways of the convention center. Most were juvenile green turtles ranging in size from salad plate to hubcap, but there were also some loggerhead turtles, as well as adult green turtles weighing hundreds of pounds.

“The floor is covered with tarps and plastic sheeting. We also bought every baby pool we could get our hands on to put turtles in,” said deMaar.

With the power grid in many areas of Texas greatly compromised by the cold, Sea Turtle, Inc. had no heat for days at its facility and the convention center. Fortunately, SpaceX, which has a facility nearby, stepped in to loan a generator, providing some heat for days before power was restored to the area.

Saving as Many Turtles as Possible

Cold stun in sea turtles is “a fairly common problem, depending on where you are,” said Norton. For example, he noted that New England sees a lot of cold-stunned Kemp’s Ridley sea turtles strand in the winter.

“When it comes to sea turtles, most people think of tropical oceans,” said Charles Innis, head veterinarian at the New England Aquarium and an adjunct assistant professor at Cummings School. “They don’t think about them being a New England animal. But they do come here in the summertime when food is available and the water is warm enough.”

Some of these turtles do not manage to leave Cape Cod before temperatures plummet in the fall.

To treat cold stun in turtles, veterinarians warm them up very gradually. “We tend to move them to a warmer room and let the ambient air temperature bring their body temperature up by a few degrees Fahrenheit per day,” said Innis. “After a few days, we’ve got them up where we want them, usually somewhere in the mid-70s.”

As soon as they get warmed up, some stranded turtles look good to go. Others not so much.  X-rays and blood work often reveal these animals have severe pneumonia, tissue damage, sepsis, or other serious illnesses as a result of prolonged exposure to the cold. 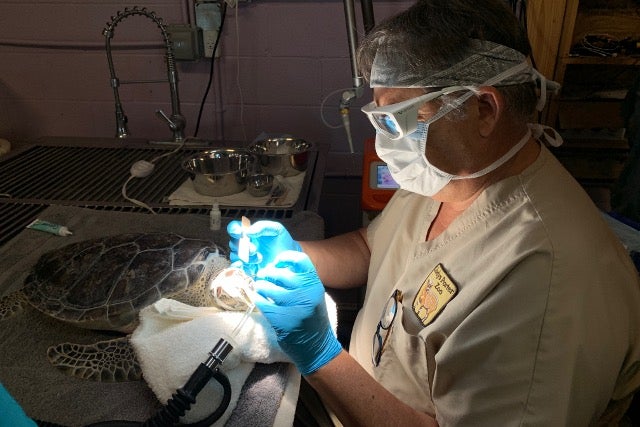 Thomas deMaar operates on a sea turtle. Photo: Courtesy of Sea Turtle, Inc.
“The sea turtles that we find in New England usually have been cold for a really long time,” said Innis. “Those turtles are often more intensive medical cases that need CPR, ventilation, antibiotics, and other medical management. We do everything we can to keep them going, and their rehabilitation generally takes weeks to months, not days.”

Turtles in the south are usually in quite a different situation. “They often were completely healthy before experiencing brief shock from cold,” said deMaar. “So if we can get them back into warm water, they’re off and swimming without us having to keep them in the hospital for a very long time.”

However, the extended nature of record-breaking low temperatures in Texas meant that many collected turtles were in worse shape than usual or died quickly after being brought in. Sea Turtle, Inc. had to hold onto the turtles for longer than usual before release, so deMaar had to orchestrate a system to keep the thousands of turtles from dehydrating.

“We started putting the little ones in a little tub of fresh water to splish-splash for 10 to 15 minutes, as a very rustic way to allow them to drink and rehydrate,” he said. “We also worried about their eyes drying out, so my whole veterinary staff plus some zookeepers spent an entire day using a thousand dollars’ worth of eye ointment to be sure we lubricated every single turtle’s eyes.”

Normally, the turtles would be released right off the beach. The rescuers worried that, given the extended nature of the cold and animals’ exposure to the elements, the water might not warm be enough yet and that the turtles might lack the energy to fight the surf to get out to deeper water.

Back into the Wild

The OSRV Southern Responder—a 300-foot-long vessel used in cleaning up after ocean oil spills—was loaned to transport the turtles out to warmer water.

On Feb. 20, deMaar spent an 18-hour day identifying individual turtles suitable for release and coordinating the land-based loading crew. “It was an amazing logistic effort to load 2,300 turtles weighing between 3 and 200 pounds and bring them to the port,” he said. “Multiple volunteers, citizens, pickups, jeeps, horse trailers made up a constant round-robin ferry between the convention center and vessel’s docking point.”

Twenty miles offshore, the turtles slid down ramps hosed down by volunteers, flapping their flippers as they cascaded back to freedom. (Watch a video of the sea turtles heading back to the ocean.)

“Reports are that when each turtle hit the water they took off like torpedoes,” said deMaar. “We did lose quite a few turtles, but each of the 2,300 we released will survive to reproduce.”

A female sea turtle lays 50 to 100 eggs each time she nests, so hopefully the population can rebound. “That’s the difference that the sea turtle rescue community makes,” said deMaar. “Holding a species away from the threat of extinction.”