Nancy Pelosi to Tufts Audience: It’s All About the Next Generation

Speaking at a Tisch College event, Pelosi talked about her career and her aspirations for young people today 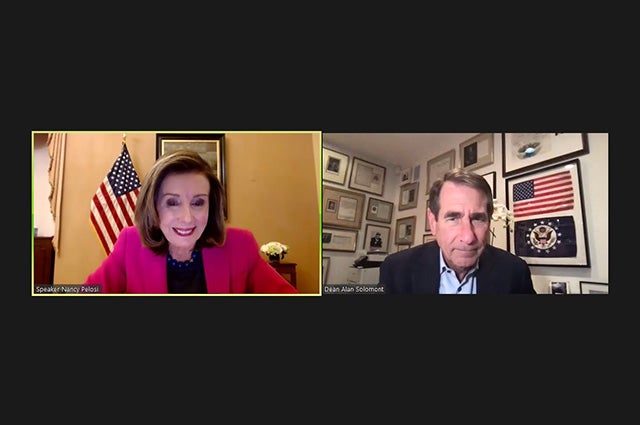 Pelosi spoke to an online Tufts audience of more than 3,000 during the Alan D. Solomont Lecture on Citizenship & Public Service on Feb. 25. She answered questions from Solomont, A70, A08P, the Pierre and Pamela Omidyar Dean of the Jonathan M. Tisch College of Civic Life, and three students.

Pelosi, whose father served in Congress, had five children before running for Congress in 1986, and has represented her San Francisco district since then. She served for many years on the powerful Appropriations Committee and the Intelligence Committee, before becoming Democratic caucus leader in 2002. She was the first woman to lead the party, and the first woman to be House Speaker.

Her original motivation for running for Congress, she said, was the fact that one in five children in America were going to bed hungry and lived in poverty. “It bothered me. I couldn’t stand it,” she said. “We had to change the public policy, to change the situation for those children. So that has always been my motivation.”

When she arrived in Washington to take up her duties in Congress in early 1987, she was one of only 24 women out of the 435 members of Congress. Now there are 119. In 2001, when she threw her hat in the ring for leader of the House Democratic caucus, she recounted, there were men who said, “Who said she could run?” Pelosi retorted: “Some of us thought it might be time to have some diversity.”

Responding to the negativity that has become endemic in American politics, she said that “hope is the winning virtue, rather than fear, which is its counterpart. So I feel very optimistic. One of the reasons I do is because of the young people, because they’re thinking in fresh, different, new ways.”

Pelosi shared her thoughts on other topics, from major legislation to advice for young women starting out their careers.

The piece of legislation she is most proud of. “Nothing compares to the Affordable Care Act—when you can add 20 million people to having access to affordable care, the lives it saves, and the quality of life it improves,” Pelosi said. Mandating coverage of pre-existing conditions in particular, she said, “made such a big difference in people’s lives.” Before the ACA, when people had a preexisting medical condition, “it was almost impossible to get health care that you could afford.”

Know your why. In response to a question from Victoria Tran, A21, for advice for women starting out in their careers, Pelosi was clear: “Know your why. For me, my why was the one in five children who lived in poverty,” she said. “Know your power, know your mind. There’s nobody like you; you are the authentic you. What’s inside of you, what you care about, what you know about, what you want to do—makes all the difference. Authenticity is everything. And you are the authentic you. When you see somebody else and think, ‘Oh, I’d like to be like that.’ Forget that—you are the best you, you are what this country needs.”

Finding hope in dark times. “People ask me all time, ‘Where do you find hope?’ Hope is right there where it’s always been, sitting right there between faith and charity,” Pelosi said. “People who have faith in the goodness and the charity and the love of others get hope. In our community, we believe that good things can happen and that gives us hope. But we also have to work on it. We have to recognize it and we have to support it and we have to be a part of it ourselves.”

Why diversity matters. Pelosi pointed out that the Democratic caucus in the House is 70 percent diverse—“women, minorities, LGBTQ.” “The beauty is in the mix,” she said. “You have to have the diversity of thinking. If you’re going to get the strength of ideas that you need to have diversity.” That very day, she noted, the House passed the Equality Act, which would prohibit discrimination based on sexual orientation or gender identity.

It’s about the future. What she and her colleagues do in Congress “is not about the past—it's about the future,” she said. “It’s for the children, their health, their education, the economic security of their families and communities—a safe community in which they can thrive in a world at peace.”