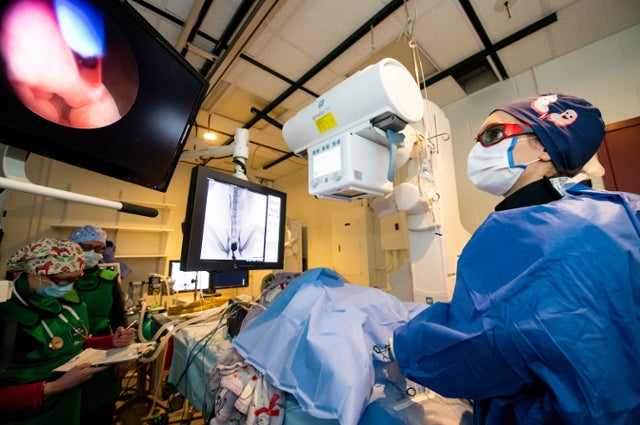 Willow, a house-trained golden retriever, seemed young to be experiencing incontinence. Not long after her owner, Jordan LaCasse, had her spayed, Willow began dribbling urine all over the house.

“At first we thought maybe it was just because she had weaker muscles since she just had surgery,” said LaCasse. “Over time, the accidents got worse. And then she started to get pretty frequent UTIs as a result.”

“It was so frustrating,” she continued. “Nobody could really figure out what was going on with her. We felt really bad because she was so young. And all the accidents were stressful. We could not leave her alone for very long in the house.”

Willow eventually was referred to the Henry and Lois Foster Hospital for Small Animals for a second opinion. Diagnostic imaging revealed that she had ectopic ureters, a congenital urinary-tract abnormality in which one or both of the two tubes that transport urine from each kidney do not connect to the bladder as they’re supposed to. Affected pets end up leaking urine, because their body has been robbed of access to its normal storage organ.

In the past, the only solution for ectopic ureters was surgery. Veterinarians would fully open the abdomen to re-implant the tubes in the proper place. Animals had to be hospitalized for at least a day post-surgery, and then needed to take it easy for 14 days to recover.

Thanks to a new fellowship at Cummings School of Veterinary Medicine, though, Willow was cured of her incontinence by a veterinarian specially trained to perform a new minimally invasive outpatient procedure.

Veterinarian Emmanuelle Butty used interventional radiology—real-time, moving X-rays known as fluoroscopy—and cystoscopy, a camera inserted through a tube into the bladder—to guide and perform the procedure without the need for a single incision.

“We lasered away the abnormal membrane and then brought the ureters’ opening back into the bladder,” said Butty.

Willow had her procedure in the morning and went home that afternoon. “She been great ever since,” said LaCasse. “She can hold her urine. She goes to the bathroom outside. She’s back to being a normal two-year-old puppy.”

Butty is completing her fellowship under the mentorship of professor Mary Anna Labato, V83, a veterinary internist who specializes in disorders of the kidneys and urinary tract and heads of one of the busiest services at the Foster Hospital.

The two-year training fellowship and new equipment—both funded by an anonymous donor—is allowing the service to better treat pets with a number of challenging conditions.

For example, many cats develop urinary tract stones that block the passage between the kidney and the bladder. “Passing a kidney stone is super painful for many people. But the vast majority of cats are not even able to pass these painful stones because the tube is just so small,” Butty said. 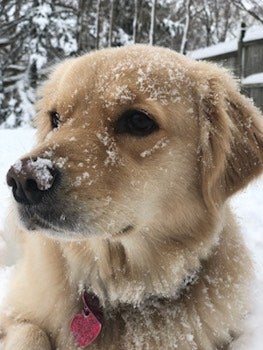 After being cured of incontinence by a minimally invasive procedure performed by Emmanuelle Butty, Willow is “back to being a normal two-year-old puppy,” says her owner. Photo: Courtesy of Jordan LaCasse
Such a urinary obstruction can sometimes quickly lead to life-threatening complications, and blockages often reoccur after they have been being surgically removed. However, interventional radiology now allows specially trained veterinarians like Butty to place a permanent bypass of the too-narrow anatomy so the cat no longer develops obstructions from stones in their upper urinary tract.

Dogs also benefit from interventional radiology when it comes to bladder cancer. They typically develop bladder cancer similar to a type seen in some people that can cause a complete obstruction of their urethra. As these dogs are not good candidates for surgical intervention, they often must be euthanized long before the cancer has spread elsewhere in the body.

Now, interventional radiology as an outpatient procedure allows Butty to laser the invasive tissue or insert a stent to avert life-threatening blockages caused by the bladder tumor. This gives pet owners more quality time with their dogs, as well as the option to explore chemotherapy or a clinical trial to help fight the cancer.

When she isn’t spending time doing interventional radiology procedures, Butty is training in and researching the use of hemodialysis.

Dialysis is most often used at the Foster Hospital to help animals recover from kidney damage caused by a severe infection, such as the bacterial disease leptospirosis, or from accidentally ingesting a poison, such as a bottle of anti-inflammatories.

By filtering toxins and excess fluid from the blood, a dialysis machine acts as an artificial kidney. “The machine takes over doing the work of the kidneys while they recover,” said Butty. In the face of severe toxin ingestion, veterinarians can even use the dialysis machine for plasma exchange, a procedure that removes the toxin-laden liquid component of a pet’s blood and replaces it with plasma from a healthy animal donor.

As part of her research work as a fellow, Butty plans to study whether plasma exchange can help better treat an autoimmune disease in dogs causing protein-losing nephropathy. In this condition, the dog’s immune system mistakes kidney tissue as foreign and starts producing antibodies to fight it—which causes a series of cascading problems in the body and can lead to kidney failure.

“To avoid further destruction of the kidneys, we need to intervene as soon as we can,” said Butty. She and Labato suspect that using plasma exchange to replace the blood with these abnormally aggressive antibodies might give affected dogs a better chance to be successfully treated long term with a combination of drugs.

“We are looking at whether there is an improved outcome when we offer plasma exchange as part of the treatment,” said Butty. “We have a clinical impression that it may help, but there is no published evidence yet.”

Training the Next Generation

Butty credited her mentor Labato for giving her the support and training to further develop and expand these new therapies at Cummings School. She completed a three-year residency in small-animal internal medicine under Labato’s instruction in 2020 before being named the first recipient of the new Fellowship in Renal Replacement Therapy and Interventional Endourology.

“These are new fields that Tufts did not have the ability to completely develop without the support of this very generous donor, and we are working hard to continue to increase the treatment options that can be offered to our patients,” said Butty. “Dr. Labato and I work as a team along with three fabulous veterinary technicians.”

Training the next generation of veterinary clinicians and scientists is the idea behind the fellowship, said Butty.

“I’m not just learning myself. I’m also helping teach residents so that more veterinarians are better equipped to respond to the demand from pet owners who want access to this kind of advanced care.”