Reading as a Bridge to Becoming an Artist

“Wicked” author Gregory Maguire, AG90, reflects on a lifelong fascination with children’s books and the powerful sway of stories for younger—and older—readers 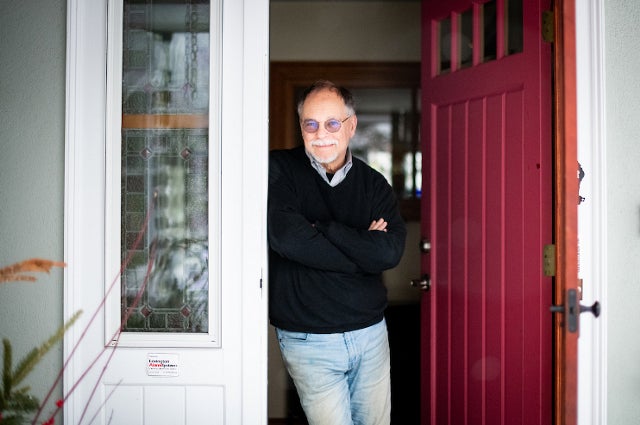 Still, there’s always another idea brewing, it seems, for this tireless and imaginative storyteller, who wrote nine children’s books before Wicked was published. Children’s stories have continued to inspire his writing—Cinderella, Alice in Wonderland, the Nutcracker—and most recently Hans Christian Andersen’s “The Wild Swans,” reimagined through the life of a misunderstood teenager in A Wild Winter Swan.

Maguire, who earned a Ph.D. at Tufts in 1990, recently spoke with Tufts Now about the central place of books in his life from an early age, and proved a “bridge to becoming an artist.”

Tufts Now: I know you’re a big advocate for quality children’s literature. With colleagues at Simmons College you co-founded the advocacy nonprofit Children’s Literature New England, Inc. Does that interest go back to your own childhood?

Gregory Maguire: My parents believed deeply in the civilizing power of reading. My mother for years was thought to be a teacher because she would arrive at the library with a huge cardboard carton from the butcher and she would leave with 40 or 50 books each week, and it was years before librarians realized she wasn’t getting books for a classroom, but for her seven kids.

Libraries are so important—would you like to give a shout-out to your childhood one?

It was a branch of the Albany Public Library, the Pruyn Library, which was built in a Dutch Renaissance style. To me it felt and smelled like a castle, and in a corner of the children’s room there was a stone staircase built into a circular tower. Across it hung a sign that you couldn’t go up—and that just enhanced the sense for me that a library was a magic place. Unfortunately, it was bulldozed to create an exit ramp on a highway extension, but I loved it.

What were some early influential children’s books?

I loved picture books, and I remember Madeline and the Bad Hat and Leo Politi’s Song of the Swallows. I remember the swallow’s-eye view of the landscape and thinking, this is partly a picture of a place, but it’s also partly a map, because you can see everything from up high.

I think I saw reading and pictures as working together. I remember making homemade paste and gluing books together and realizing that I was inventing—as every child invents. The art of writing was simply to fill up the page and make it look balanced and finished.

Listen to a conversation with Gregory Maguire about his interest as a child in reading .

I remember kneeling down at the coffee table on a Sunday afternoon to make books, to draw pictures and figure out how to write words underneath them. That was really an emulation of my father’s work ethic as a writer and journalist. He worked all weekend to support a family of nine. He typed at a card table in the living room, and I would tuck my little knees underneath the coffee table and work, too. So the first emulation was not of a piece of art—it was of a method of being, of behavior, and I think that’s important.

What were other books you remember?

Books like My Father’s Dragon and Where The Wild Things Are, and Beatrix Potter—I must have read them and loved them, but I can’t specifically recall them, in the same way that I’ve always loved the rain, but I don’t remember specific rain. Books were like weather. They were always there. 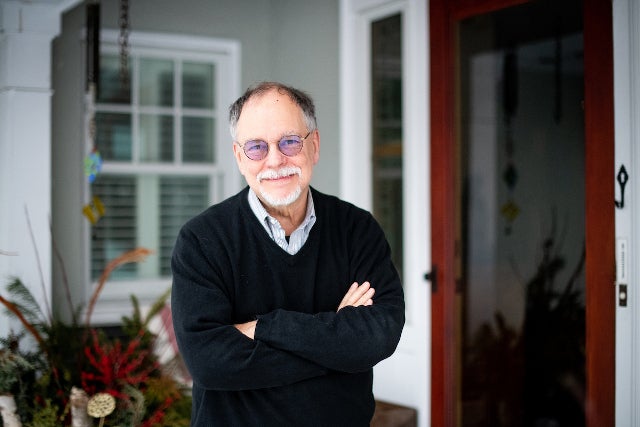 “I loved being forced to look at things in a new way,” says Gregory Maguire. “That’s what fantasy does; that’s what poetry does, too. Some books are there to confirm your sense of the world, and other books are there to challenge you.” Photo: Alonso Nichols
I began to distinguish the separate storms and the separate bouts of joy and sunshine when I was about 10. What I loved the best were what we call fantasies, but I called them magic books. Stories like The Wizard of Oz and Peter Pan I fell upon with the cry of someone seeing their relative from the old country. I quickly realized that magic books gave me the most satisfaction.

I loved being forced to look at things in a new way. That’s what fantasy does; that’s what poetry does, too. Some books are there to confirm your sense of the world, and other books are there to challenge you. And for a kid who lived in a very circumscribed circumstance, being challenged by possibility was a bridge to maturity, a bridge to becoming an artist, and it was what I loved the most when I went to the library.

After you earned a master’s at Simmons, and while you were teaching there, you decided to get a Ph.D. at Tufts. What influential people here do you recall?

There were two teachers that I remember well. Martin Green [an English professor in 1963-65 and 1968-94] was my thesis adviser and a highly ethical and inventive scholar and critic—and a man I deeply admired as a vanguard for children’s literature. He believed something that is now more common, but was not that common at the time, that children’s literature is a legitimate branch of the world of adult literature. Of course, I believe that, too.

The other person was Jesper Rosenmeier, another revered scholar and writer. He taught a course in Puritan and colonial literature; I was obliged under the terms of the doctorate to take at least one course of English literature from before 1800. I thought, Oh the Puritans, they’re so rigid and faded, they’re so bland, they’re so mean-spirited. Boy, did I have the blindfold torn away!

Under the tutelage of Rosenmeier, I came to realize that the Puritans were deeply passionate people and deeply brave, as wrong-headed in many things as most people are in the course of human history, but not as repressed as I had been raised to believe. Their lives were filled with the same passions and need for meaning, courage, fear, and sorrow as mine was filled with. That was a lesson for me in tolerance.

A lot of what Wicked is about—looking at things more deeply before jumping to  conclusions—is a result of my education from 1986 to 1990 at Tufts, when I was forced to develop more tolerance for the complicated and mystifying circumstances of history.

I can see how that would be a through line to thinking about shading the evil that gives rise to the Wicked Witch of the West.

When I began to write, I didn’t first think of The Wizard of Oz; I was thinking that I wanted readers to care about what I was going to write, to follow me on my exercise of investigation, even if I didn’t know where it was going to end.

So I thought it would be necessary to write about a character who was already considered evil, and my first thought was to write about Hitler. It didn’t take me too long to realize that I wasn’t smart enough and I didn’t speak German, and in fact, people had already been writing about him for decades.

And what is the universal advice given to writers? Write what you know. Well, what do I know? I know church music and children’s books. Children books, specifically the evil within children books, is often stereotyped, and that’s where I had my little brainstorm: a stereotyped villain in a book means that we don’t have to examine the motivations, or behavior, or character. If a witch is there, a witch is a witch, that’s what we need to know in one word, you know? And that led me to thinking about the Wicked Witch of the West, and that led me to Wicked.

Right, and to challenge that sort of surface assessment of her.

Challenge the surface assessment of her and not to let her off the hook. I mean, I’d say Broadway has sanctified her. The novel is more complicated than that. She makes terrible mistakes, as we all do, even when we’re trying to be moral and just. My novel presents her as a more complicated, but a more human character.

Your latest book, A Wild Winter Swan, pays homage to Hans Christian Andersen. Can you talk a little bit about your perception of his legacy—it seems to be that idea of the outsider or the invisible character that pulls you in.

Yes, the broken, the disenfranchised, the offshoot, the unrecognized is the story behind every fairy tale, because the fairy tale is a story of challenge. Andersen makes us look at the castoff and the incidental, the broken, and in a way that to me echoes the Christian message of “what you do unto the least of my brethren, you do unto me.”

A fairy tale asks you to pay attention, to your focus to look at things you usually overlook and to find out the value in them. That’s what Andersen does repeatedly.

But I will say to you, about in the instance of Andersen’s story, The Wild Swan, I was drawn to the character of the Swan boy, as I called him, precisely because at the end of the story, he wasn’t healed, he wasn’t completely rescued.

He was partly rescued and he had to get on in life being an aberration, just like all of us; we’re all aberrations. We’re not the finished product we imagined ourselves to be when we were coming out of middle school and thinking, oh, I’ve got to get through high school, and then college, and then I’ll be like . . . Ivanka. Well, life doesn’t give us that. Even Ivanka probably isn’t as much Ivanka as she’d like.

As for adult books—I’d also love to hear what books rise to the top of your reading list.

I just came across a list I had made about 30 years ago of my favorite novels or books of all time. Some of them are so well-known you needn’t list them—To the Lighthouse, The Sound and the Fury, among others. But there are also books I have read repeatedly or whose single experience of reading has never left me.

Here they are: The Once and Future King, by T. H. White; Howard’s End, by E.M. Forster; The Ninth Hour, by Alice McDermott; The Queen of the Tambourine, by Jane Gardam; and Goldengrove Unleaving, by Jill Paton Walsh.

Why is it important for children to read—and to have steady reading in their lives?

When you’re young and you turn to a children’s book, you have stepped up your game in learning to tolerate ambiguity. At the very least and at the very first, even books for the young encourage a tolerance for ambiguity.

Literature doesn’t ever do just one thing. It can console, and challenge, and confirm, and mystify all at once. I think what literature does is require of readers to tolerate ambiguity. In the beginning, when a child sits on a grandmother’s lap, looking at a picture book, both of them share a sense of ambiguity and expectation—what is the next page going to reveal? You don’t know.

Not knowing is part of the attraction. It’s part of the temptation to turn the page and find out. To tolerate not knowing is to tolerate the possibility of multiple choices that are always emerging. This is a fundamental part of our training as human beings.

What are your top 10 recommendations for books that should be in every child’s library?

I draw from my own reading experience, so this list mostly reflects the decades in which I was raised. I’m having a hard time keeping it to just 10.