How COVID Canceled a Lacrosse Season that Had Barely Begun 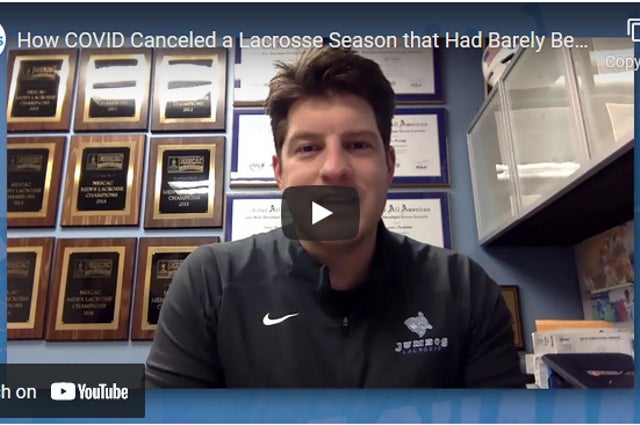 In March 2020, the COVID-19 pandemic canceled the winter and spring seasons of many Tufts Athletics teams, including basketball, swimming and diving, track and field, baseball, softball, lacrosse, and rowing.

For our retrospective on the Tufts community's early response to the pandemic, Casey D'Annolfo, A06, the Mike Daly Head Coach of the Tufts University men's lacrosse program, recounts the experience of finding out that the team’s season would be canceled after only four games.

If we go back to March of 2020, it was kind of a surreal 96 hours, because we go from beating #2 Amherst [College] by 10 goals on Saturday the 7th, feeling great about it, feeling like this team is really special, like we could do everything that we wanted to do—compete for a national championship—and felt like we had all the parts. And the guys that we thought were going to be great, were great.

That Sunday, we had heard that something happened at Amherst. And then on Monday night, we heard that Amherst canceled all spring sports. We were baffled by that. We couldn't believe what was happening, and it seemed that it was spiraling out of control there, but we felt we were a little immune to that.

Then, the next day, Tuesday the 10th, we knew that we had a game against Ithaca. Woke up in the morning, felt good about it, did our coaches’ meeting. I was actually about to go get a haircut and I got an emergency text from [Senior Associate Director of Athletics] Alexis Mastronardi, which said, "Okay, coaches, we're meeting at noon."

We get in the room, and Alexis and [Director of Athletics] John [Morris] told us, "Hey, listen, nothing's finalized yet, but if any of you are playing tonight, if you have seniors, you should play them." We thought it was, maybe, a little bit over-reactionary. We thought, "Well, they can't cancel the season. Nothing's really happening. There's only a couple of dozen cases in the United States. This seems crazy."

Shortly thereafter, probably about six minutes left in the fourth quarter, I called the team in, called a time out, and told them, "Hey, listen, I don't really know how to tell you this. There isn't a good way to tell you this, but this is our last ride. This is the last game of the year." It was pretty emotional; I was very emotional. But all credit to the guys: the seniors brought them in, and they put their emotions to the side and just said, "Hey, let's finish this thing. Let's finish it the right way." They played with a level of intensity and focus that I don't know if I'll ever see again.

Then the game ended, and John Morris spoke to us, and did a phenomenal job talking to our team, giving credit to our team. I had a chance to talk with the guys after the game. That was really hard to look at those guys, and know it was over, and know the potential that we had. We walked off the field, and back into the locker room, and that was it. It was, overall, just a pretty surreal night… just an absolute roller coaster of emotion to use all the cliches and metaphors. But yeah, a lot of emotion happened really quickly, and just feel for those seniors on that team that had to have their careers end in that fashion.

Please visit Tufts Remembers March 2020 for more stories from our retrospective on the university’s early response to COVID-19.