Could This Cause World War III?

In "2034," a new novel by Tufts alums Elliot Ackerman and James Stavridis, a conflict between the U.S. and China quickly escalates into world war 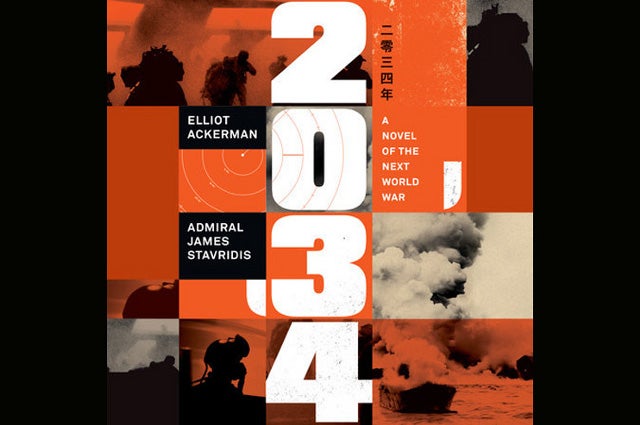 It’s March of 2034. The setting is the South China Sea. A seemingly minor incident involving a U.S. Navy warship and a Chinese fishing vessel provokes military retaliation by the Chinese. At the same time, a U.S. fighter pilot is forced to the ground in Iran and taken prisoner. In both cases, sophisticated cyberattacks lead to the collapse of U.S. military communications systems. Disaster looms.

That’s the premise for 2034: A Novel of the Next World War, by Elliot Ackerman, A03, F03, and James Staviridis, F83, F84, former admiral, NATO commander, and Fletcher School dean. 2034 isn’t just a taut thriller, but also the story of people caught by circumstances: Sandy Chowdhury, a National Security Council staffer; Sarah Hunt, a naval commander; Lin Bao, a Chinese military official; and Qassem Farshad, an Iranian brigadier general and veteran, among others.

The novel, published on March 9, got a big boost a few months ago, when Wired magazine devoted an entire print issue to the novel, publishing the first four chapters of the book. It has also nabbed laudatory blurbs from the likes of former defense secretaries Jim Mattis and Robert Gates.

Stavridis says that as he watched the U.S. and China “sort of begin to sleepwalk toward a war” in recent years, he wanted to write a cautionary novel on the topic—inspired in part by Sir John Hackett’s The Third World War from 1979. 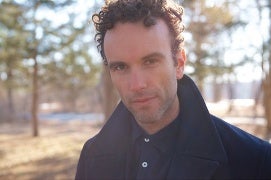 “One of the things we were aligned on immediately was that we wanted to create a character-driven book,” says Elliot Ackerman. Photo: Huger Foote
Stavridis, author of nine nonfiction books, and Ackerman, who has four novels to his credit, had known each other through The Fletcher School, but it was their mutual editor at Penguin Press who suggested they work together on the novel. The two decided to give it a go, collaborating on the first chapter as a test. Soon they had three chapters, and a book contract.

“I think we had a shared interest in all of the themes in the book, and of what the book should be in terms of getting at very broad geopolitical themes,” says Ackerman. “But at its core it is character-driven.” Naturally, some of the characters, like Chowdhury, are Fletcher School alums.

The two met regularly for in-depth story meetings; Stavridis would outline a chapter, Ackerman would write a first draft, and they’d share it back and forth until it had a single voice.

Tufts Now recently spoke with Ackerman and Stavridis about the book, how to write character-driven thrillers, nuclear weapons, and the inevitability of war.

Tufts Now: How much of your own personal experiences did you bring into the book?

He is sort of the classic asymmetrical warrior who spent decades fighting in places like Iraq, Afghanistan, Syria. He was someone I could identify with. Chowdhury, who works in a mid-level government job and is a divorcee, is someone I can identify with. So you’re always looking for these access points into the characters as you’re imagining them.

James Stavridis: I’d say pretty obviously Sarah Hunt is a classic Navy destroyer officer. She commands Destroyer Squadron 21, the Rampant Lions, that gets sunk in the opening of the book—that was my squadron. She commands carrier strike groups. Of course, I’ve done that as well. So, very much my kind of DNA is rattling around in Sarah. 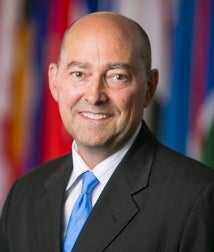 “In this book, you see that escalation drive the United States to be the first to use a tactical nuclear weapon,” says James Stavridis. “I don’t think that’s an unrealistic scenario in the least.” Photo: Kelvin Ma
I think the other character that I had a lot of empathy for is Sandy Chowdhury. In my case, it’s his work at the National Security Council staff—being a mid-level staffer trying desperately to get ideas in front of the president. I’ve been there. Then finally, Lin Bao really speaks to me; again, a Naval officer, a seagoing officer. I think in many ways, he’s the most sympathetic and complex character in the book. But Elliot nails it. It’s bits and pieces of both of us in each of these characters, as well as other ideas and resources.

Looking back at history, there seems to be an inevitability to many wars, as tensions escalate—that’s certainly the case in 2034. But are these conflicts inevitable? What’s the way to avoid disaster, to walk back from the precipice?

Stavridis: Conflicts are not inevitable. For every conflict that we have, I would guess there are more that have not occurred. In fact, if you look metrically at conflict, it’s actually gone down over the centuries. I think we’re getting better at defusing conflicts. Having said that, obviously, there is still a great deal of combat going on around the world, as well as potential conflict.

So the idea of putting out the story as a cautionary tale, I think, is important. Conflict is not inevitable, but if you don’t seek to avoid it, the chances go up.

There’s a tactical nuclear attack in the books that kills 7 million people fairly early in the book. Is that something you see as potentially happening in real life?

Stavridis: Oh, yes, absolutely. What we imagine at the moment is that it’ll never happen, that no nation, having looked at the horrific effects of Nagasaki and Hiroshima, would ever reach into that kitbag and pull out a tactical nuclear weapon. I hope that’s correct. But the premise of this book is that if you don’t take steps early on, that ladder of escalation moves you almost inevitably toward this outcome.

In this book, you see that escalation drive the United States to be the first to use a tactical nuclear weapon. I don’t think that’s an unrealistic scenario in the least. If this happened, I think China would respond with another one, and then the U.S. would. Then you’re headed toward the apocalypse pretty quickly.

So, unfortunately, if you look at the history of conflicts, escalation is so often the pathway to truly destructive moments, World War II being perhaps the classic example.

Ackerman: I think it’s one of pacing, in many respects. There are short chapters, all time-stamped, none really more than 2,000 words long, and you’re always moving, moving, moving through the book.

One of the things we were aligned on immediately was that we wanted to create a character-driven book. You can imagine telling this story where you’ve got 30 people and it’s very focused on the technology, and there are books like that—but we wanted one that was focused on the characters.

Stavridis: This is not is a techno-thriller. It’s not Tom Clancy. As I think about it, I would say it’s a very literary book that happens to be a page-turner. These are multilayered individuals, and there are remarkable moments of the human experience further into the story. And that’s what war is, at the end of the day. It is going to be an experience that touches our human core.

Name two or three books you’d recommend for a reader interested in this topic you’re writing about.

Stavridis: Graham Allison’s Destined for War pulls you from Thucydides to the present moment using thoughtful, analytic study of big global conflicts, and is very much a cautionary tale.

Another seagoing book I’d recommend is The Bedford Incident, which very few folks would have read. It’s by Mark Rascovich, but it is set at the height of the Cold War, in which an American destroyer and a Soviet submarine are playing cat and mouse in the North Atlantic and manage to get into a situation that potentially could lead to a nuclear war.

Ackerman: Ryszard Kapuscinski’s Shah of Shahs is just a beautiful book about the Iranian Revolution. I’ve always loved it—it’s been a touchstone for me. Ender’s Game by Orson Scott Card is a book I’ve been thinking a lot about recently.

I read it when I was younger, and then when I was in the military, and during the pandemic I listened to it on audiobook with my children, driving around. That is an apocalyptic novel—it’s science fiction, but it imagines the end of worlds. And right now, I’m reading Ford Madox Ford Parade’s End, which are books about societies in the midst of what I would call late empire.

Stavridis: I would add a third book, about the writing of fiction. It’s by George Saunders, who wrote Lincoln in the Bardo. The title is A Swim in a Pond in the Rain. He takes seven master Russian short stories and explicates each one of them with an eye toward, “How do you tell a story?” For someone like me, who’s a novice in the writing of fiction, it was gorgeous. I also loved Lincoln in the Bardo, which I think is one of the most interesting novels I’ve ever read.

One Year After He Fled His Native Country, an Afghan Rebuilds His Life at Tufts