Spiritual Hope and Healing After a Tumultuous Year 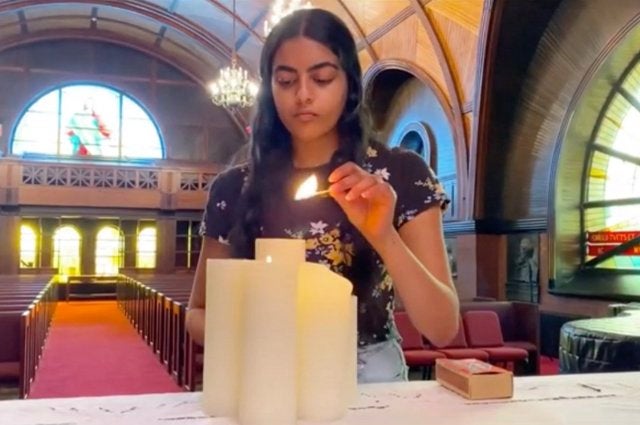 When the COVID-19 pandemic first shut down Tufts campuses—and the country—a year ago, Neha Ratnapuri, A23, struggled with the loss of the life she knew.

“It was easy for me to think of all the things I was missing—my life, studying in coffee shops, meeting new people, flying to the other side of the world,” Ratnapuri recalled during a March 7 ceremony  hosted by the University Chaplaincy and Hillel, commemorating a year of upheaval due to both COVID-19 and racial injustice and titled “A Time to Grieve, Hope and Act: Marking a Year Since Tufts’ Campus Closure.”

A member of a Tufts Indian classical dance group and an extrovert, Ratnapuri was forced to change the whole way she interacted with the world, she said. But she also found an unexpected opportunity to explore and reflect as she reconnected with her old dance studio back home, took up yoga, and deepened her spiritual practice.

“Seeing that I was able to grow and find ways to be connected despite being physically separated from others gives me hope that we all still have each other no matter what happens,” said Ratnapuri, who is also a member of the Interfaith Student Council, Buddhist Mindfulness Sangha, and Hindu Student Council. “Seeing people mobilize and support causes around the world gives me hope that we can expand and grow our empathy even in isolation.”

Honoring what has been lost was a common theme among the students, chaplains, and staff who participated in the event, which included a virtual candle-lighting ceremony by members of the chaplaincy, the Buddhist Mindfulness Sangha, the Unitarian Universalists, the Hindu Student Council, and the Interfaith Student Council. It also featured a piece by Rabindranath Tagore, read by new Hindu advisor Preeta Banerjee, about the sky talking to the Earth after losing the sun, moon and stars; and a musical performance of Nava Tehila’s “Ehul Niggun” (song of reflection or introspection) by Micah Kraus, A22, and Georgia Kay, A22.

A Call for Unity, Love, and Optimism

Protestant chaplain Reverend Daniel Bell called attention to the 2.5 million people around the world who have died from COVID-19, the one out of three Americans who have lost someone to COVID-19, and the disproportionate impact felt among Black and Indigenous communities and people of color, as well as “the immunocompromised, the undocumented, the elderly, the unhoused, and the incarcerated.” He spoke about George Floyd, Breonna Taylor, Ahmaud Arbery, and other “lives taken too soon by racism and police brutality.”

Watch a video of Violet Kopp, A24, as she reads her poem "Prayer For New Beginnings" during the Tufts Chaplaincy's event "A Time to Grieve, Hope, and Act."

Interim Buddhist chaplain Harsha Menon spoke about the two million women, mostly women of color, who lost their jobs or had to stop working to care for children at home. She also spoke about the pain of not being able to hold newborn babies or gather at funerals, the struggle of those in recovery or in unsafe domestic situations, and the attack on the Capitol building.

Muslim chaplain Iman Abdul Malik-Merchant spoke about another kind of loss. “We remember: the uncertainty and sadness. The frantic packing and rushed goodbyes. The abrupt ending of study abroad experiences, just when you were beginning to grasp the new world around you. The grief of missing all of Tufts’ spring traditions, including Senior Week and graduation,” said Merchant. He recalled experiences like hugging a friend and dancing in a crowd, the hush of a theater and the applause after a lecture, the smell of coffee at The Rez and candles at Goddard Chapel, which have still not returned. “Remember the loss of the daily joys of life together,” he said.

Humanist chaplain Walker Bristol said it can be difficult to see the light ahead. “Grief and loss can tell us things that are not true: that we alone are to blame. That we will feel our sadness in the same way forever,” he said. But he continued: “The burden of our grief is halved when it is shared—and the celebration of what we loved about who we lost, the celebration of the size of our grief, that celebration is doubled.”

That call to unity, love, and optimism ran throughout the ceremony, offering a bright counterpoint to the expressions of grief. Menon led attendees in a practice of metta, a meditation extending loving kindness to oneself, friends and family, and the wider world. Catholic chaplain Lynn Cooper invited attendees to put their hands on their chests and “feel your beating heart and the beating heart of this community.”

Ratnapuri and Tufts Hillel member Violet Kopp, A24, invited all to participate in a collective art project: community members will create designs on paper squares responding to the prompts “grief, hope, and action.”

“Every time I breathe, I know billions of people around me and in the past are breathing with me. Every time I dance, I have millions dancing with me,” Ratnapuri said. “I feel strong and connected in these moments, and it gives me hope because I know I’m not ever alone.”

He added: “The voices of change and commitment to create an anti-racist society were louder than ever this year, and I hope we can channel them to actionable steps, and keep the light on the hill burning brighter than ever.”

Tufts Hillel Director of Community Building Liz Aeschlimann, quoted Deuteronomy 6:5: “And you must love the Lord your God with all your heart, all your soul, and all your strength.” “Action to me means showing up with my whole heart and being willing to be transformed, putting my body on the line in protest, and moments where I can offer care,” Aeschlimann said. “It means putting my resources, skills, time, and money toward mutual aid, reparation, and transformation.”

From pain comes understanding, suggested Aeschlimann, quoting a prayer that calls to write its words “on” our hearts, rather than “in” them—because before the words can fall in and take root, our hearts have to break.

University Chaplain Reverend Elyse Nelson Winger said the same, quoting a line from a poem by the Sufi mystic Rumi: “The wound is the place where the light enters in.”

Kopp, of Tufts Hillel, offered a vision of that light in a poem that she shared with attendees. It begins: “Be still and look and listen to the way the world resets when we let it.” It goes on to describe Main Street sleeping, tides breathing deeply, animal life returning to cities, neighbors speaking kindly.

A World of Music