Reviving yeast from the time of the pyramids, Seamus Blackley recreates loaves fit for a pharaoh

Last spring, when so many people were baking bread that grocery stores ran out of yeast, physicist and tech entrepreneur Seamus Blackley, A90, didn’t worry about empty shelves at the store. He was making loaves with yeast from ancient Egypt.

For nearly two years, Blackley’s quest to harvest yeast from Egyptian antiquities and meticulously replicate 4,500-year-old techniques to bake delicious bread has captured the imagination of scientists, home bakers, and journalists alike. When he announced his first success in August 2019, Twitter lit up with more than 25,000 comments, while Britain’s Sunday Times proclaimed, “Scientist discovers ancient yeast that stretches back to pharaohs.”

That first triumph involved reviving the one-celled organisms that had lain dormant for thousands of years in artifacts now held in museums. Earlier innovators had resurrected millennia-old yeast—but Blackley did it without harming the pottery.

During the pandemic, he aimed to go one step further. Not only would he bake bread using ancient yeast and grains, he would also recreate ancient techniques, forgoing the use of a modern oven.

For Blackley, the allure of the project lay in experiencing how people lived thousands of years ago. He likened it to time travel. “We want to go places not because we want to collect data but because we want to feel what it was like,” he said. “This ancient food is that kind of time machine.”

Recreating the bread that built the pyramids might seem an unlikely obsession for Blackley. He’s a particle physicist who once hoped to work on the now-cancelled Superconducting Super Collider and then applied his knowledge to video game development for companies like DreamWorks. An encounter with Bill Gates led him to Microsoft, where he created and designed the iconic Xbox video console, before becoming a talent agent for other gamers and a serial tech entrepreneur.

But he’s long been interested in baking and history, first musing about the role that bread played in medieval times and then looking back at its importance in ancient Egypt. Recreating the past through bread baking requires qualities that are central to his varied endeavors: a freewheeling imagination balanced by a focus on what works.

“Baking is at the spot in between creativity and craftsmanship,” he said. “I’ve always had a penchant to build things that are functional.”

Creating bread like that of ancient Egypt requires ancient yeast, heirloom grains like einkorn, kamut, and barley, and authentic techniques. It also raises question after question. Take salt, for example. We know salt is required for bread, but where did the Egyptians get their salt? Was it traded? Mined? Evaporated from seawater? And what was water like? How alkaline was the Nile in 2400 B.C. and how did its pH affect the yeast microbes?

“You change any of these things and you get totally different-tasting bread,” Blackley said. He now mills his own flour from raw heirloom grains, because even the artisanal whole grains he was buying had too much fiber removed in processing.

Which gets to another Blackley tenet: a tenacious focus on the details.

Blackley knew that other people had brewed beer using yeast harvested from artifacts but had destroyed those objects in the process. Blackley wanted to preserve the antiquities.

With the help of Serena Love, an archaeologist at the University of Queensland, and microbiologist Richard Bowen, a Ph.D. candidate at the University of Iowa, Blackley developed a sterile sampling technique that left artifacts unscathed (see “How He Did It”). Love also paved the way for him to get access to Egyptian antiquities at the Museum of Fine Arts in Boston and Harvard University’s Peabody Museum in the summer of 2019.

Blackley’s first endeavor successfully yielded a loaf of fragrant bread baked in his kitchen oven on August 5, 2019, two weeks after he collected the samples. “I’m emotional,” he tweeted at 2:33 a.m.

That loaf and those that followed have been delicious, according to the few who have tasted them. Experiments with ancient foods often fail for lack of knowledge and technique, and yield unappetizing results, Blackley said. “Then our temporal bias causes us to say that ancient people must have eaten bad food, because they didn’t have refrigerators or understand hygiene,” he said. “That’s obvious bull. We can’t decide the human race is stupid and decided to eat terrible food.”

Bread was, after all, the nutritional mainstay for the thousands of workers who built the pyramids. Those laborers, who recent research suggests were hired for the job (and therefore could protest the working conditions), were fed from bakeries the size of football fields. “Put it in the perspective of a cook,” Blackley said. “When the next shift is coming off, you’ve got 700 big football-player-size guys to feed. You’re thinking, ‘If I screw up the bread, they’re going to beat the crap out of me.’ Common sense says you needed good food.”

The flavors of Egyptian bread would have been rich, incorporating spices like fennel, cumin, and coriander and perhaps accompanied by onions cooked in duck fat, he said. (Blackley’s tip for home bakers: Add roasted coriander seeds to your bread dough to wake up the flavor.)

To get even closer to the original experience and taste, Blackley experimented more last spring, approximating techniques depicted in images from 2400 B.C. The result was conical loaves with “incredible aroma and texture,” he said.

One reason why his accomplishment is “a big deal,” Love tweeted, is because “it worked.” Archaeologists in Giza had tried something similar 25 years earlier, but the loaves were badly charred.

COVID-19 research has necessarily co-opted microbiology resources worldwide, but eventually Blackley hopes he and his collaborators can resume efforts to collect more yeast samples spanning Egypt’s Old, Middle, and New kingdoms. The team plans to analyze the yeast genomes and compare them with modern strains. All the while, Blackley intends to continue his quest to perfect the art and science of ancient bread baking.

“There are not a lot of foods you can reliably say are the same as they were thousands of years ago,” he said. Tapping the ability of yeast microbes to hibernate offers “an opportunity to have an emotional, primal, intimate experience” with an ancient people. 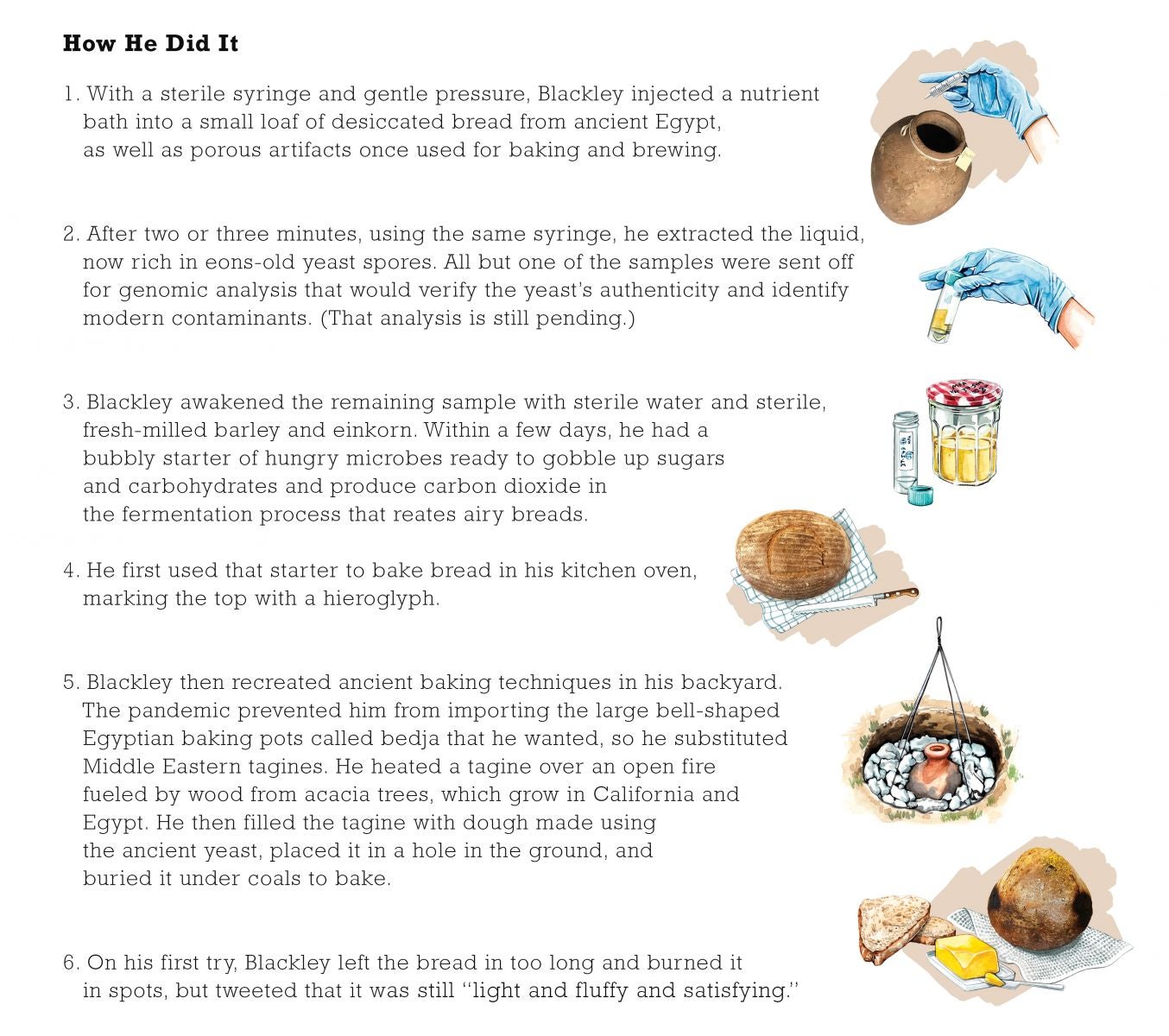