As they learn where they will spend their first years as physicians, graduating MD students look back on their Tufts journeys 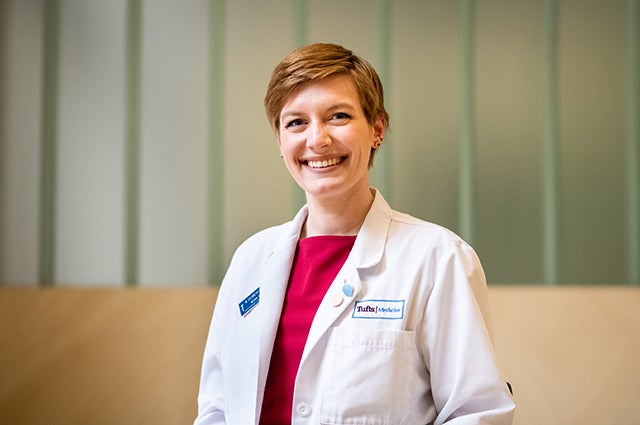 While Match Day this year meant balloons and champagne at home and friends and family joining the celebration via Zoom rather than an on-campus party, the happy tears and elation of this year’s graduating MDs from the Tufts University School of Medicine remained the same. Four students from the class of 2021 shared where they’ve matched for their residencies and how their journeys at Tufts have prepared them for their next steps.

The Sharewood Project is a cool thing—it’s an entirely student-run free clinic in Malden. From day one, students are really encouraged to volunteer. We partner with Cambridge Health Alliance and family medicine physicians for supervision, but students are the ones doing the boots-on-the-ground work. I served as the executive director for a year, and the most rewarding part was setting the broader vision for improving the clinic, such as creating a school physicals day. One day in August we took over the Salvation Army building, and did a full day of school physicals for kids who needed it.

From the first weeks of my pediatrics rotation, I was really drawn to kids as a patient population. They just have this joy about them even when they are very sick. They are so resilient and positive. It just feels really good to make kids better and send them into the world. There’s also a lot more social support for kids than there tends to be for adult patients. If they need help with school or housing, there are resources to draw on for that.

I really see myself splitting between research and clinical practice—that’s my motivation for doing the dual M.D./Ph.D. degree. In my future research, I’m interested in transgender youth and differences of sexual development, such as how hormone treatments affect health going forward. How can we do things early to set these kids up for lifelong health? That’s a question I’m interested in pursuing.

Her match: Boston Children’s Hospital. She says: “Boston Children’s was my number one choice so I’m really happy. It’s great to know I get to stay in the Boston area and go to this amazing program!” 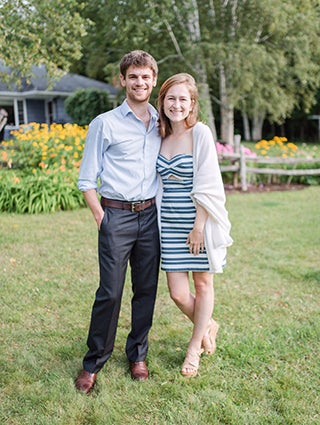 Christian: We’ve been really fortunate to be at the Maine Medical Center as part of the Maine Track program. I’ve found awesome mentors from diagnostic radiology and the operating room who took me under their wing, so I could learn to combine my interest in radiology with surgery.

Lindsay: When I applied for med school, I wanted to be able to explore rural health, as well as live somewhere where the quality of life is fantastic. With the Maine Track, you’re working in a high-tier academic hospital but you get to go to the beach or go biking or hiking around Portland.

Christian: In our careers, we’d love to end up in New England and play a role in the Maine Track going forward—we’re very interested in medical education. But since we’re matching as a couple and because we can go somewhere together with this built-in support system, it makes us feel totally fine matching anywhere.

Lindsay: Medicine can be very heavy. There are not a lot of jobs where you may have people dying in front of you over the course of the day. I had a difficult rotation in the surgical ICU in the early summer with several unfortunate outcomes, and Christian saw how I was run down from that. He’s been through the same thing, so he automatically understands.

I didn’t come to med school intending to find a life partner. But by the nature of the intensity of medical school, you get to know each other on a very deep level. I’m so fortunate to have such a great partner in this process.

Their match: University of Michigan. Lindsay says: “We both cried a little bit, and after having a complicated match, it’s nice to know we’re going exactly where we wanted to go. My residency [in anesthesiology] is shorter than Christian’s [in interventional radiology] so it’s good there are a lot of fellowships and academic opportunities I can pursue at Michigan. We’ve heard wonderful things about both programs from Tufts alumni who are there!” 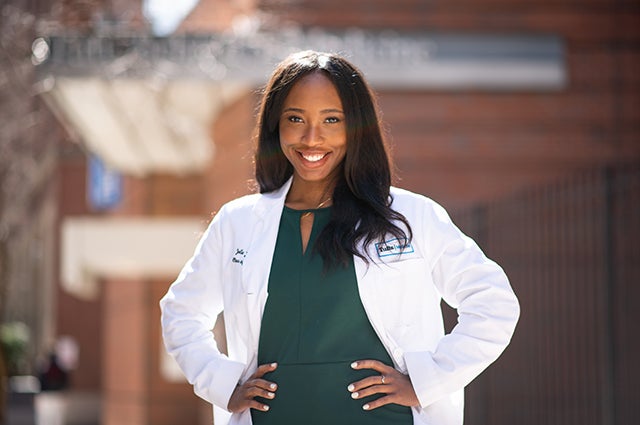 “Medicine isn’t only about pathology and biological systems, but also the systems that exist outside of the human body,” says Jolie Jean, M21. Photo: Alonso Nichols

I came to Tufts with a background in molecular biology and neuroscience from Princeton University. I knew a lot about molecules and cells, but I didn’t really see the full picture. Medical school gave me perspective.

I decided on a career in radiology at the end of my third year. I’ve always been interested in visualizing pathology, and it’s a great field with a lot of innovation and a very promising future. But it’s also one of those specialties that’s not commonly integrated into the core curriculum.

I’m eager to change the way radiology is perceived by medical schools. I want to ensure students are aware of how radiology has evolved with the rise of molecular imaging, artificial intelligence, and interventional oncology, and to demonstrate the importance of radiologists in patient-centered care. I’m currently on the editorial board for RSNA’s leading educational journal, RadioGraphics, and I have served on the planning committee for the American College of Radiology’s inaugural Medical Student Symposium.

Diversity, equity and inclusion are also important to me. Our patients come from different backgrounds. Our role as physicians is to ensure they have equal access to care. As radiologists, we are in a unique position to both diagnose and provide minimally invasive treatments for diseases that historical required extensive surgery. With advancements in technology, our impact spans beyond our home institutions.

Medicine isn’t only about pathology and biological systems, but also the systems that exist outside of the human body. All of them play a crucial role.

Her match: A surgical preliminary year at Stamford Hospital/Columbia University Program, followed by a diagnostic radiology residency at Weill Cornell Medicine/New York Presbyterian. She says: “Now that I’ve matched at my number one choices, I am relieved, excited, and looking forward to a very promising medical career.”

—as told to Monica Jimenez 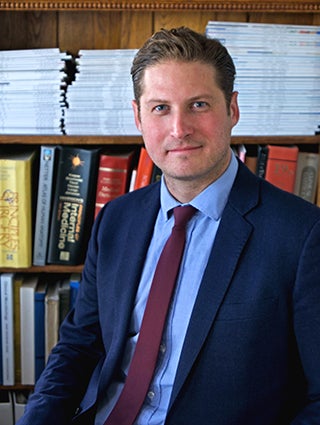 I started medical school when I was 27. After graduating from NYU, I worked in television journalism, starting at CNN for about four years, then bounced around a couple of smaller networks before moving to Boston from New York to work on a show called Boston Trauma for ABC. It’s essentially a docudrama series in hospitals, focused specifically on emergency and trauma medicine.

I got incredibly inspired by what I was seeing in places like Massachusetts General Hospital and Boston Medical Center. I would be right next to the surgeon in the bays—it’s the closest “shadowing” experience you could hope to get, because you’re documenting what they’re doing.

One specific case I filmed, a young man in a motor vehicle collision came in the middle of the night with an aortic dissection. Essentially, this can compromise blood flow to the entire body. I filmed an endovascular aortic stent graft repair, and to see the repair complete in front of your eyes, I thought that was so amazing. It inspired me to consider this change, and now, every year has been better than the last.

I’ve been able to use my background in communication and love of writing as class president. Part of my role was to send out a weekly email highlighting exams, extracurriculars—more administrative functions. But I tried to capture our experience, approaching it with a narrative format, sharing stories that would entertain classmates or commiserate about what we were all going through. I was lucky to get great responses—people would pull me aside and say they really appreciated my stories. I’m proud of that.

His match: Maine Medical Center. He says: “Now that we’re vaccinated, I had my closest friends from the past four years with me at my mom’s house in Cape Elizabeth. We watched the deans speak on Zoom and celebrated everyone’s great news with bagels and Bloody Marys. To be at home in Maine and get the news that I’m staying here in Maine was really special.”