I wanted to go on athletic adventures with my kids. But could I pursue my vision of a meaningful life and still pay the bills? 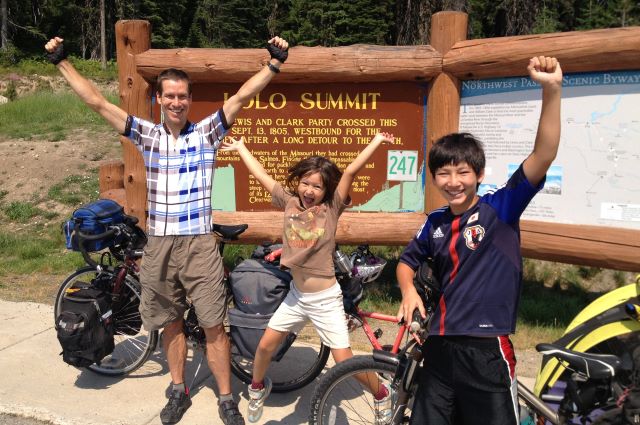 This is the first in a series of essays called My Moment, in which Tufts graduates from across the university share stories of personal transformation—from small moments that offered new insight or inspired fresh thinking to life-changing moments that altered the course of a relationship or career. Do you have a story that you’d like to share? Let us know at now@tufts.edu.

When I turned 40 and wrote a list of life goals, number one was “dream up adventures with my kids.” I’d been working at Intel Corporation for a decade and enjoyed running marathons, a pursuit I took up when I was 13. My kids were 1 and 6 years old. I wondered if my passion for athletic challenges could help me take advantage of the decade or so where the greatest gift I could give them was my time. Before long, they would outgrow their need to be with me.

I began wondering about my own wording: dream up adventures with my kids. What did that mean? I realized that I was trying to square up my professional ambitions, my ambitions as a father, and that golden decade of my children’s lives. I decided to make the last two my priority. 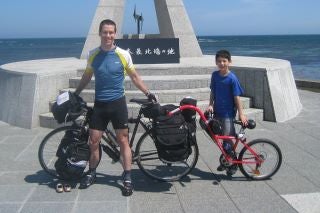 At Cape Soya on the northern tip of Hokkaido, Japan, Charles Scott and his 8-year-old son, Sho, prepare to embark on a 2009 bike ride across Japan. Photo: Eiko Ikegaya
I sat down with my son, who was almost 7, and said, “Let’s dream up a father-son adventure. It can be anywhere; it can be anything.” At the end of that conversation, we decided to ride a bike with a trailer cycle the entire length of Japan, the native country of my wife, Eiko Ikegaya, F94. It was 2,500 miles, and it took us 67 days to get from the northernmost point of Hokkaido to Cape Sata, the southern tip of mainland Japan. The trip led to my first book, Rising Son: A Father and Son’s Bike Adventure Across Japan, and was the portal to life-altering personal and professional transformation. After 14 years at Intel, I left in 2011 to become a family adventurer and writer.

We all have nudges, whispers from our authentic selves telling us that something in our life needs to change. The nudges don’t give us the data to act; rather, they give us the energy to determine the nudge’s raison d’etre. If we’re in a constant process of exploring and listening to ourselves, we’ll know when it’s time to act and, ultimately, to transform.

Transformation, William Bridges explains in his book Transitions, differs from external changes, such as moving to a new city, getting married, or becoming a parent. Transformation, by contrast, is an inherently psychological process with three stages: death, disequilibrium, and rebirth. When we feel a nudge from our authentic self leading us to transform, we often resist, because we know that something, some part of us, is going to die. The next stage, disequilibrium, is perhaps the worst part; it’s like having a field lying fallow that you want to plant and make productive, but you can’t quite do it. The wonderful part is rebirth, into your newness.

My own nudge to transform began in earnest when my son and I were cycling through Japan. I would get up early and write in my journal, reflecting on my life. Before we finished our journey, I knew that I wanted to write a book about it—and that, as much as I’d enjoyed my time at Intel, it was time to move on and to center my professional life around my kids and my athleticism. After returning from that bike trip across Japan with my son, I stayed at Intel for another two years. But the nudge was insistent, and I knew I was going to move on. I just needed time to prepare.

I realized that I had outgrown my corporate identity and that I wanted to challenge myself in a new way while having more time for my kids. I wanted to live full of vitality and to be an example to my children by fully expressing who I wanted to be in this world.

And yet—there was a side of me that wanted to stay in the corporate world. It was a very powerful place to work, and to give that up really was a kind of death. That’s why it took me two years. I didn’t flippantly decide to leave. I planned it, I struggled, and I wrestled with the concept.

The biggest practical barrier to my transition was figuring out if our family would still be able to afford our life. But there are other forms of wealth in your life than material wealth: physical and emotional health, vitality, spirituality, impact on your family and your community. So how do we blend them in a way that is satisfying and sustainable?

I took that problem statement seriously and asked myself what it would look like to craft a life intentionally—one full of meaning, one that honors every form of wealth, while taking into account my responsibilities as a husband and father. I wanted to take my two children on crazy adventures, and in the end I cycled more than 7,000 miles with them through seven countries. My daughter was 2 when I cycled the length of Japan with my then-8-year-old son, and I thought that was a little young. Two years later, when she was 4, I thought she was ready to join the adventures. So the week after I left Intel in 2011, the three of us flew to Iceland and cycled the country’s circumference over 46 days. Our three-person bike train included my daughter in a bike trailer and my son on a trailer cycle; attached, interdependent, up for anything.

That was the leap, and once I took it, things unfolded organically. I didn’t know exactly what my professional identity and path would be. I just knew that I wanted to take on adventures with my kids, write books about them, and see if I could make that a sustainable, sufficient contribution to our family income. My wife worked full-time at the United Nations, and her salary and health insurance—combined with savings from my work at Intel earmarked for the purpose—allowed me to take this risk.

Over time, I developed a business model built around writing, public speaking, and mentoring others. I built a community of people interested in personal and professional growth who see me as a resource to help them nurture their sources of vitality and craft a meaningful life. I’ve learned that if you pay close attention to your nudges, you can take ownership of your own process of transformation. It can be helpful to do this work with others on a similar journey, and to have a mentor to guide you along the way.

The day I left Intel, I could not have told you how my life would unfold. I just said, “I don’t know what will happen, but this feels like the right path. I’m going to dream up a vision of family adventures and writing and see if I can sustain it financially.” That was all I had. But that nudge was so insistent that I trusted its energy, and that I would be able to figure things out—just follow it and figure it out.

—As told to Heather Beasley Doyle