Rachel Kyte, F02, Has Advice for Women Leaders: Rage at the Machine, Not Each Other

In honor of Women’s History Month, Fletcher School’s first female dean reflects on her life, career, and why this is a moment for women’s leadership

Fletcher School Dean Rachel Kyte has dedicated her career to increasing access to clean, affordable energy for the world’s poor. A 2002 graduate of Fletcher’s Global Master of Arts program, Kyte served as special representative of the UN secretary-general and chief executive officer of Sustainable Energy for All.

Before that, she headed the World Bank Group’s campaign to advance international action on climate change and support clients in the move to a low-carbon future. Kyte grew up in eastern England and earned her degree in history and politics from the University of London. She is married and has two children.

On the occasion of Women’s History Month, Tufts Now asked Kyte who she been most inspired by and what advice she has for the next generation women leaders.

At the time I was just sort of outraged. I didn’t consciously understand that it was discrimination on the base of sex. I just wanted to play football. I was good at football; it’s what I loved. I just really couldn’t understand it. When I look back now, there was no women’s football—you had to watch men.

There were no women playing and at university, it wasn’t a big thing. So Mia Hamm, Julie Foudy, Michelle Akers—that generation of American women playing football—that’s who I wanted to be. If I’d been in a different place, maybe I could have been them.

I met them once at a reception for the Women’s Sports Foundation in Washington, D.C., in a fancy house in Georgetown, and I was just completely star struck. I went up to them and was gushing. I said, “You know, I’m British and, really, you have terrible chants. You don’t sing—it’s awful. I come to watch you, and it’s just lots of six-year-old girls going ‘USA! USA!’ You have to have songs.” And they were like, “We agree, please write some songs.” 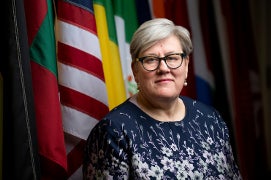 “It is women leaders who often in communities are the ones on the cutting edge of understanding of how we need to recalibrate our relationship with nature,” said Rachel Kyte. “And if nature is in crisis, then this is a moment for women’s leadership.” Photo: Alonso Nichols

I had a peripatetic career in politics, civil society, large international organizations. I was thrown into diplomatic situations before I was ready, before I was prepared sometimes. That’s how you grow.

But when I think about my career, I think in particular of the women who saw in me something that I probably didn’t see in myself, and who just gently nudged me or gently opened a door or suggested maybe that I think about something. And it was always implicit—in some cases, very discreet—but it was enough to push me onto the stage as it were.

I had to perform, and I am indebted to those women, some of whom are still in my life as mentors and friends. I hold a very special regard for them, and I seek to emulate them in the way that I do that for young women today.

And then there’s this period in the middle, which I’m in now, where you’re caring for elders and caring for kids. And I think that that shapes our leadership. I think it makes us who we are. It’s a blessing, but also it can be extraordinarily stressful. And the other thing is that, professionally, we’re performing as well. I think certainly for women of my generation, you often have to be better than the rest. You are twice as prepared. You are dealing with imposter syndrome as well as the PowerPoint presentation.

In that moment, just be kind to yourself. I think it’s the most important thing. And be kind to others because everybody can make a different decision, and that decision is legitimate. And then rage at the machine. That means that women don’t have the same opportunities, that pay isn’t equal, that we still have boards which are lacking in diversity and therefore we are not managing the risks that are coming out as fast, but don’t rage at each other.

You can sit in a meeting, and you’ll be the only woman. There are too many boards without 25 percent of women. There are too many situations where a woman will raise an issue and then a man will raise it. And they’ll say, “That’s an amazing original thought, sir.” And it just goes on and on and on, and the only way to get over that is to just go through it, shake yourself down, get up the next morning and make sure that you do something to bring more women to the table, that you do something to open up the space.

I had mentors from my Girl Scout leader to the woman who trained me when I was 13 on how to speak on any topic for two minutes without stopping, to women I worked for, to women who intervened in my life and told me to stop messing around and get serious, to women who told me I was underselling myself, to the woman who rang me up when I was on the Acela from New York back to Washington and said, “Rachel, you look fantastic today, but you need to do something about your hair. It’s too flat in its color.”

I mean, they’re all mentors, they’re all sponsors, and I am so deeply grateful and fond of them. You know, you never stop being a sponsor. You never stop being a mentor, and you shouldn’t be afraid to sort of lean into a young woman if you think you can be of help, just even a sounding board, because every one of those conversations—you never know what kind of impact it might have.

I went to Boston High School for Girls in Boston, Lincolnshire; the headmistress was Jessica Mary Webb. She was quite fearsome and I was afraid of her, but she did something quite remarkable. Nobody in my family had gone to college. We didn’t talk about university or anything like that.

And when I was about 15 or so, she called me into her office a few times and just started giving me books. She gave me Plato’s Republic and she gave me a large volume of the world’s philosophers, and all these kinds of things. She would just give them to me, and she wouldn’t really discuss them. There was this unspoken expectation that I was going to go and read it. Then I would bring it back and she’d give me another one. She was preparing me for college. She was preparing me to sit for the entrance exams. And I think that was extraordinary.

I think of my mother who was the first in her generation to go to secondary school and me, the first in my generation to go to university, and my daughter and my son now and their expectations that they will go to university, and what they will be able to contribute—my son in understanding that women are equal, my daughter in understanding that you could be the Vice President. You can be the President. You can be the Prime Minister.

In just two generations we’ve come so far, but there is still so far to go. We have to lean back. We have to pull people with us. We have to help the woman that maybe can’t get to that door that is ajar where the opportunity is. We have to be in solidarity with women across the world who just don’t have the opportunities to be at peace, to be equal, to be treated with dignity.

And it’s something that each one of us can do every day. If we can make those changes in my family—and my family is just an ordinary family—in two generations, we can do that for every other family too.

When I was appointed, the extraordinary reaction of Fletcher School alumni really knocked me off balance because it was an overwhelming message from women alumni of “At last!” I spoke with women alumni who are in their 70s now to ones who just graduated in the last couple of years.

Some of the stories were horrific, frankly, of the atmosphere in the classroom over different decades—the expectations or the narrowing of expectations, the inability to be expected to go on to do a terminal degree. At that point, I realized I have a duty of care to the institution and a duty of care to all of the alumni because, for men, the school that they look at now will be a stronger school if we’re a school that embraces equality.

When I went to Davos to the World Economic Forum, and I was briefed for the first time on the pandemic around the third week of January. I think I had my first conversation with the president of the university about it sometime in February. At the beginning of March, I was reading the news. I was talking to colleagues and friends across Asia and Europe, and we were beginning to have conversations at the university level.

Using the management techniques that I had learned at the World Bank and the IFC and the UN, I called the entire management of the school into my office and said, “OK, we’ve got something coming and we need to start preparing now.” We then started having 4 p.m. meetings every day with every division head at Fletcher, and we started doing advanced planning.

I found myself drawing on all of this experience of managing crises in international development when I was at World Bank. I didn’t think that I would use those skills in this job in the way that I am, but I’m glad I had that experience and that resource to draw upon.

We had two global economic crises before the pandemic hit—the crisis of climate change and the need to decarbonize, which hits vulnerable people around the world and within our own society much harder in terms of air quality and impact on health and vulnerability—living in the places that can’t be protected, etc.

And then a crisis of inequality, which is what all economists were blowing alarms about before the pandemic. The crisis hit and it pulled the band-aid off the depth and the breadth of the inequality that we have in society.

Hopefully, we understand something more now about the need for resilience than we did before the pandemic, but it has been heartbreaking to see food insecurity be a critical issue in this country just as it has been across Africa.

It’s mind-numbing to see the number of people who can’t feed their children here just like it is across Africa. At this point, there has to be a reckoning. If we don’t take care of each other, we will not be able to take care of ourselves, and the crises that are coming are going to be more profound than this one.

Underlying all of this is a crisis of climate change, obviously, but also a crisis in our relationship with nature and a crisis of pollution and waste. These are the three ecological crises that the UN talks about.

—as told to Ronee Saroff