Tufts University’s veterinary school aims to increase diversity among students, staff, and faculty, and by extension, the veterinary profession at large 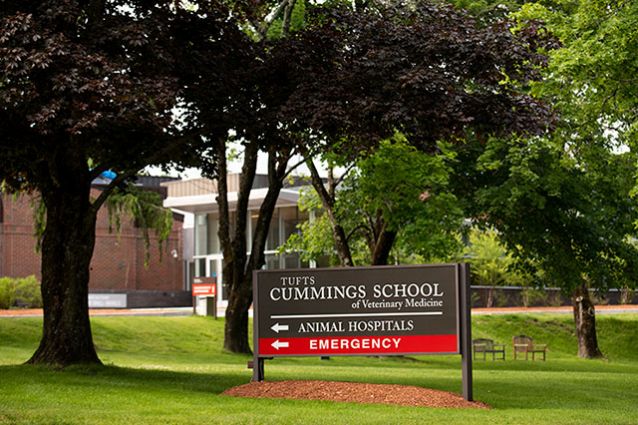 Damian Clarke, V24, is a Black veterinary student who does not often see himself represented in veterinary medicine — a field which is about 89 percent white. Originally from Barbados, Clarke moved to the United States in high school and received his undergraduate degree in Florida before landing on the Grafton campus of Cummings School of Veterinary Medicine.

“While I haven’t had one specific role model who looks like me, I’m able to find bits and pieces from different people who I aspire to be like. And that, for me, has been just as good,” Clarke said.

Cora Evans, V23, a second-year veterinary student at Cummings School, grew up in Raleigh, North Carolina, where she often visited the Duke University Lemur Center with her mother. She knew from a young age that she wanted to work with animals, but she had met only one Black veterinarian in her life. That changed in her undergraduate years when she attended Spelman College, a Historically Black College and University (HBCU) for women, and completed a study abroad program focused on wildlife conservation in the East African nation of Tanzania. 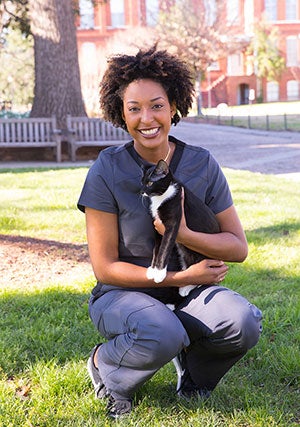 Cora Evans, V23, is one of two student representatives on Cummings School’s Anti-Racism Task Force, formed in July 2020. Photo: Courtesy of Cora Evans
“As I've gotten older, I've almost exclusively worked with Black veterinarians,” Evans said. “After COVID-19 canceled my internship plans for the summer of 2020, I was introduced to a small ruminant and camelid veterinarian in North Carolina by a family friend. As a mobile veterinarian, he gave me a perspective on what it's like to be a Black veterinarian in the South.”

He told her about a time when he responded to an emergency call in a rural area where the client had Klu Klux Klan memorabilia throughout their home and yard. And he recommended that she never travel alone when responding to calls at night.

Evans is one of two student representatives on Cummings School’s Anti-Racism Task Force (ARTF), which was formed in July 2020 and charged with addressing racism in all facets of Cummings School. The ARTF and other groups at Cummings have taken several steps toward increasing diversity, equity, and inclusion (DEI) on campus and fighting racial injustice.

“As a graduate of an HBCU, coming to Tufts was a very different environment from my undergraduate college. I decided to join the task force because I have been very aware of the lack of diversity, especially in Tufts' student body, and wanted to do something about that,” said Evans.

The ARTF has organized training sessions on implicit biases, with upcoming sessions planned on microaggressions and going from bystander to ally. They’ve made suggestions for ways to improve recruiting and retention of under-represented students, as well as recruiting and support of students from Minority Serving Institutions and HBCUs. Also, the task force provided funding for 10 staff, 10 faculty, and 10 students to participate in the Purdue University Certificate in Diversity and Inclusion in the Veterinary Profession. Upcoming work includes prioritization and implementation of recommendations from the university anti-racism workstreams.

“I'm encouraged by the strides that the school has taken so far towards providing equity and justice for marginalized members of our community but realize that this important work needs an ongoing commitment from all of us at Cummings School,” said Florina Tseng, chair of the ARTF and Associate Dean for Diversity, Inclusion, Equity, and Climate.

Tseng said the school’s long-term and short-term efforts are in support of all community members, from students to staff, faculty, and administration. She is engaged in the process of enhancing consideration of DEI in faculty search committee procedures.

Tseng has collaborated with Cummings School Dean Alastair Cribb to respond to students and hold campus-wide discussion sessions in the wake of major current events such as George Floyd's death, the Breonna Taylor grand jury findings, the U.S. presidential election, the insurrection at the U.S. Capitol, and President Joe Biden's inauguration. 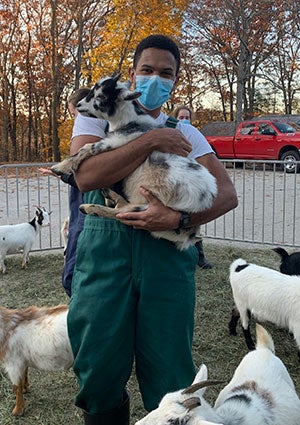 “While I haven’t had one specific role model who looks like me, I’m able to find bits and pieces from different people who I aspire to be like,” said Damian Clarke, V24. Photo: Courtesy of Damian Clarke
Clarke said he was encouraged to see Tufts and Cummings School facilitating conversational spaces where students can discuss or vent about recent events, as well as understand other people's opinions and “see things through different lenses.”

“You can't see something from someone else's perspective if you haven't experienced what they've experienced,” he said. “I think a lot of people have a problem admitting they didn't know something would affect someone else because it's never affected them. Yes, it might be an awkward conversation at first, but it's pushing everyone in the right direction.”

The establishment of student diversity scholarships will provide a greater opportunity for first-generation students and students from lower socioeconomic backgrounds to afford a Cummings School education. The Diversity Scholarships Selection Committee has completed the process of awarding four scholarships to the incoming V25 class.

The ARTF also has joined forces with the Tufts Veterinary Council on Diversity (TVCD) on multiple projects, including a panel discussion with Black alumni in celebration of Black History Month. But diversity and inclusion efforts go beyond racial differences.

Over the past six months, TVCD launched a pronoun usage awareness campaign, helped found a student chapter of the Latinx Veterinary Medical Association, and held a panel on the topic of communicating with people who are deaf or hard of hearing. The group has also conducted a survey of the community about disability, accessibility, and chronic illness, which may be used to guide accommodation considerations in the future.

"At Cummings School, we recognize that veterinary medicine is one of the least diverse health professions. This has to change," said Dean Cribb. "We also know that systemic racism is present on campus and across the profession. This too has to change. The Anti-Racism Task Force will help us identify and take real and meaningful steps towards change, while our long-standing Tufts Veterinary Council on Diversity will make sure that we don’t forget the breadth of issues around diversity, inclusion, and belonging.”