First Impressions of the Undergraduate Class of 2025

Amid a surge of applications, Tufts admits its most ethnically and racially diverse undergraduate class 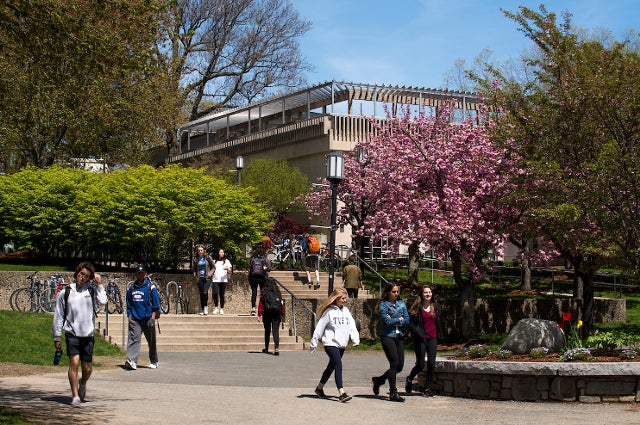 The pandemic contributed to a surge in undergraduate applications to Tufts this year—a 35 percent increase over last year, aided in large part by robust virtual outreach initiatives and a pilot program that waived the standardized test requirement.

Now the Class of 2025 also holds a historic distinction of its own: it is the most ethnically and racially diverse undergraduate class ever admitted to Tufts—56 percent of U.S. students are students of color, up from last year’s 50 percent.

The class is the culmination of another highly selective admissions process, with Tufts admitting 11 percent of the more than 31,000 who applied. Acceptance decisions went out to applicants on March 30.

“This incoming class is exceptional,” said JT Duck, dean of admissions and enrollment management, for how they are navigating life during a global pandemic. “We read countless stories of the challenges of maintaining physical and mental health this year, the struggles of financial hardship exacerbated by disruptions to the economy, and the heartbreaking loss of opportunities at school and in their communities. They persisted, though. In doing so, they created new opportunities, supported their families and friends, and navigated a new world of virtual and hybrid learning modalities.”

The outrage over racism and violence against the Black community also came through in student applications. “Applicants shared with us their own lived experiences with racism, and the impact of the Black Lives Matter movement on their own commitments to social justice. We read so many essays from students that are taking action to build more just, equitable communities,” he added. “I know this class will come to Tufts and find strength in our commitment to civic engagement, active citizenship, and equity and inclusion as they continue to change and improve our community and our world.”

To support students and their families throughout the anything-but-normal admissions process, Tufts introduced a test-optional three-year pilot program.

As part of a holistic and contextual admissions process, the Office of Admissions leaned into evaluating curricular rigor, grades, insights gleaned from recommendation letters, and each applicant’s academic engagement with even more intention than before for all applicants, whether or not scores were submitted, said Duck. “Ultimately, about half of all applicants did not submit SAT or ACT scores,” he said, “including just over forty percent of admitted students.”

Tufts also doubled the number of prospective students who were reached by recruiting efforts, such as a robust series of virtual events and programming, engaging email communications, and print and digital publications.

These efforts, said Duck, overcame the social distancing restrictions imposed by public health protocols during COVID-19, and went a long way to personalize the Tufts experience and attract a class with considerable talents and aspirations.

“The engineers, visual and performing artists, social and natural scientists, and humanities scholars admitted to this class are impressive—for their accomplishments, for their individual voices, and for their collective potential to contribute to the Tufts community,” he said. “I can’t wait to meet them in the fall.”

Duck said he is especially pleased that the Bachelor of Fine Arts and combined degree programs with the School of Museum of Fine Arts at Tufts continue to grow in popularity, attracting scholar-artists across the U.S. and around the world who want “to use their art to tell powerful stories and to effect change,” he said.

Here are some of the highlights of the admitted Class of 2025.

Women make up 56 percent of the admitted class and men 42 percent. Two percent identify as non-binary, genderqueer, or preferred not to specify a gender identity. Women account for a slight majority at both the School of Engineering and the School of Arts and Sciences.

Students who are the first in their family to attend college make up more than 10 percent of the class.

More than 10 percent of admitted students work with community-based organizations that support students on their paths to college, including Matriculate, Ron Brown Scholar Initiative, College Horizons, Institute for East African Councils on Higher Education, Thrive Scholars, and Chicago Scholars. Tufts enrolled 20 students through the QuestBridge National College Match program and admitted more than 200 QuestBridge Scholars to the Class of 2025.

There are 86 admitted students who come from Tufts’ host communities—Medford, Somerville, Boston, and Grafton­­­­­­­­­­­­.

All 50 states, the District of Columbia, Guam, Puerto Rico, and the Virgin Islands are represented.

Accepted students, who were notified on March 30 via their applicant portals, are invited to partake of a virtual “Jumbo Month” throughout April. Accepted students have until May 3 to confirm their plans to enroll at Tufts.