Learning about My White Relatives

My father never said much about his estranged family. Now I understand why. 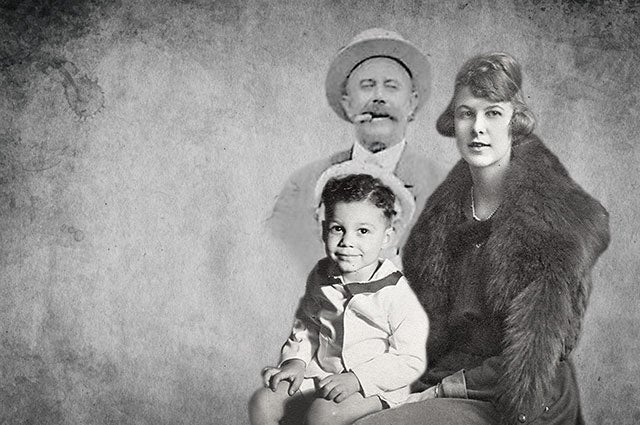 This is the second in a series of essays called My Moment, in which Tufts graduates from across the university share stories of personal transformation—from small moments that offered new insight or inspired fresh thinking to life-changing moments that altered the course of a relationship or career. Do you have a story that you’d like to share? Let us know at now@tufts.edu.

In 1968, our nation was in deep turmoil: The Rev. Dr. Martin Luther King, Jr. and Robert F. Kennedy were assassinated. The civil rights movement was in full swing, and Black people were openly targeted. I was in the third grade, and my family moved from Palmyra, New Jersey, to nearby Cinnaminson, where the schools offered a better education. We were the second Black family in the neighborhood, and the entire block came outside to watch us move in. Someone later wrote in chalk on one of our screen windows: “[N-word] go home!”

I was one of two Black students in my new elementary school, and every day brought a physical confrontation. Instead of doing my homework after school, I would shadowbox in the basement, knowing the next day could bring trouble at school. On the verge of failing, and deeply unhappy, I told my mom one day that I hated white people because they hated me. “You can’t hate all white people because you have white relatives,” she tersely replied. But that wasn’t enough to dissolve the hatred building within me.

Growing up, I knew of only one white relative, and that was my dad’s brother Harry. We called him Uncle Bumpy, and I remember him visiting us on occasion. Whenever I asked my dad why his brother was white and where the rest of his family was, he only said, “I’ll tell you when you’re older.” I kept asking over the years, but he only told me that his father had died, and that his mother had loved him very much.

I didn’t fully learn my dad’s story until 2008, when I was 48. When my wife, who is French Canadian, our two sons, and I were touring Colgate University, the dean of students showed interest in our diverse family. When the tour ended, I agreed to give a presentation about the Bauer family during the school’s multicultural weekend the following year. I was excited for the opportunity—and it gave me a new reason to broach the topic with my dad. 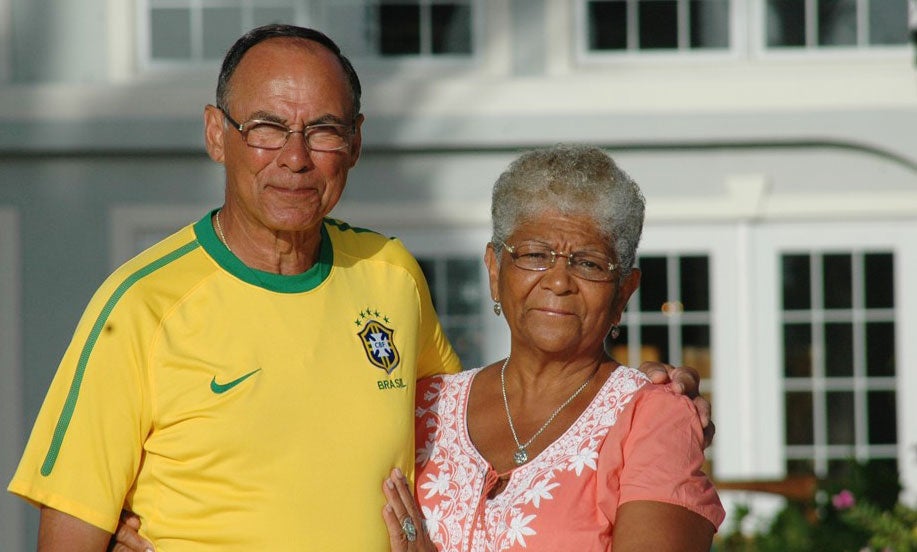 Jay Saar Bauer’s parents, Jim and Yvonne, shared the family stories with him when he was in his 40s. Photo: Courtesy of Jay Saar Bauer.
When I did, he very reluctantly told me his story. My dad, Jim Saar Bauer, was born June 30, 1937, and raised in Palmyra. The town was deeply divided along racial lines. Black people lived on the west side of town, known as the west end, while white people lived toward the east. He and my mother, a Black woman raised in the Black section of Palmyra, began raising their family in the west end. My dad, on the other hand, grew up in the white section of town, the only Black son of white parents, Lilian Saar Bauer and John Albert Bauer. Lilian and John’s first son Fred was born before a train accident injured John, ending his sexual relationship with Lilian. Over the years, she had three more sons with three different men: Jack; Jim, my father; and Harry, my Uncle Bumpy. The one striking difference was that my dad’s father, James Layfield Young, was a Black man living in Palmyra. Ominously, he disappeared the day my father was born. Evidence strongly suggests that a mob of armed white men, Ku Klux Klan members among them, killed him that day as the news of my father’s birth spread.

In Palmyra in the 1940s, you were either black, white, or—as people in town said—Jimmy Bauer, the sole child of mixed heritage. My dad says that skin color was everything. Extended family members didn’t hug my dad when they visited for the holidays. He never had a birthday party, and was relegated to his second-floor bedroom during family gatherings. Hoping to help, his mother gave him bleaching cream with the aim of lightening his skin. When he was 18, my dad enlisted in the Marines, later earning an electrical engineering degree from La Salle University.

My grandmother died when my father was in the Marines, and the only relative who maintained contact was his younger brother, Harry. Since Harry’s death in 2001, his wife and daughter have kept in touch with us; they’re our only link to my father’s relatives.

Knowing the details and finally understanding the pain behind my father’s silence sparked a quest to find my white relatives. I imagined and hoped for reconciliation and closure. In 2014, a cousin I had never met contacted me. On a quest to understand the Bauer roots, that cousin—who hadn’t known about my dad—had done a Google search of Saar Bauer, which led to me. We filled each other in via phone and email, but my cousin’s closer relatives said speaking with me violated their elders’ wishes, quickly severing that connection. For the first time, I experienced the familial rejection that defined my father’s childhood; skin color did matter.

That exclusion shaped him in many ways, but whenever I talk with my dad about his past, it hits me again that segregation defined his life. Not only the deep segregation of Palmyra, but also our culture’s unrelenting quest to determine his place: Are you Black, or are you white? A racist commanding officer asked that question pointedly when my dad was in the Marines, addressing him as “boy.” In Birmingham, Alabama, in the early 1950s, my dad’s wintertime-light skin allowed him to eat at a restaurant counter reserved for whites only. It made him so nervous that he never did it again. 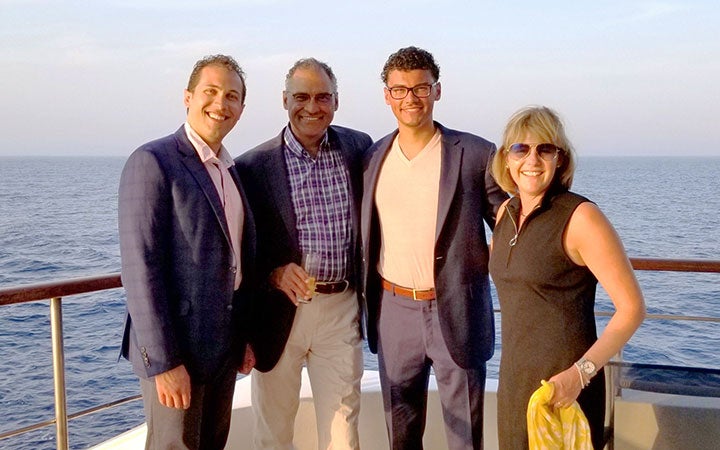 Jay Saar Bauer, second from left, with, from left to right, his sons, Jay and Jordan, and his wife, Joanne. Photo: Courtesy of Jay Saar Bauer
He told my brothers and me these stories growing up, while shielding us from his family’s deep shame. Our family routinely talked about race and skin color around the kitchen table. As my sons were growing up, my wife and I had equally candid conversations with them around our kitchen table. The world never questions my racial identity, but my lighter-skinned sons have faced many of the same questions as my dad—despite their private-school backdrop and the passage of time.

It’s been 13 years since that presentation at Colgate. Over the years, I’ve shared my family’s story at numerous colleges and high schools. My father’s childhood illustrates the magnitude of American racism. I aim to teach students that regardless of background and skin color, people are more alike than we realize. I want them to understand that negative stereotypes held by both white and Black Americans fuel our country’s racism.

Being in conversation with students and faculty has taught me that students learn very little about African American history, including the nuances of being Black in our culture. For one thing, stories of skin tone, from high yellow to deep Black, are common among African American families, but remain unfamiliar to white people. Black America needs to educate white America about Black history and culture to elevate it from its perception as subservient to the white American narrative. In turn, Black America cannot distrust all of white America.

When I was 8 and new to Cinnaminson, I hated white people because they hated me. My grades were so bad that my teacher, Nancy Molnar, asked my parents if I could do my homework in her classroom after school. They agreed, and my teacher changed my life: She started the academic revolution that began with earning As, continued to high school honors classes, led me to Tufts and, eventually, to my current dental practice.

She also saved my life: Nancy Molnar, a white woman with red hair and freckles, showed me that someone white could advocate for me. It led me out of hatred, and to an understanding that Martin Luther King, Jr. articulated best: “Violence is immoral because it thrives on hatred rather than love. It destroys community and makes brotherhood impossible. It leaves society in monologue rather than dialogue. Violence ends by destroying itself. It creates bitterness in the survivors and brutality in the destroyers.”

My father never had the kind of advocate that I did in Nancy Molnar, despite his mother’s love. Ultimately, he’s lost his family. I only hope that our family’s story can serve as a syllabus for humanity. I know it’s needed. When I was younger, I told my dad, “Don’t worry, when I grow up, the world will be different.” At 61, I’m grown up—and the world is not very different than it was.

-As told to Heather Beasley Doyle