A Tale of Two Tapirs 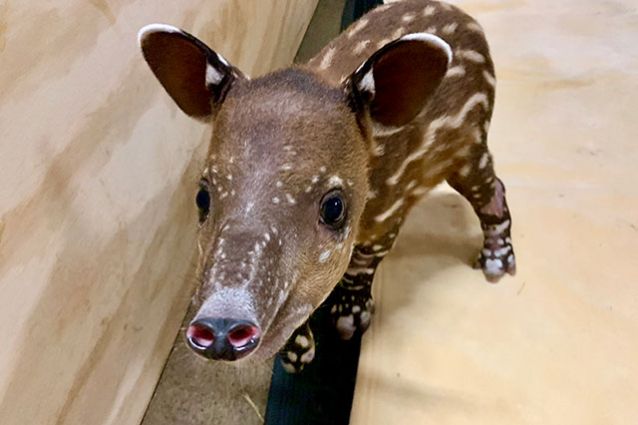 Late one evening in October 2020, two very unusual patients arrived at Cummings School of Veterinary Medicine in Grafton. A Baird’s tapir named Abby at Franklin Park Zoo in Boston had given birth to twins — a boy and a girl — that needed emergency care.

Twins are exceptionally rare in tapir species, and the zoo’s staff said they could find no prior record of twins born to a Baird’s tapir either in the wild or captivity. Abby carried the twins to term—which, for a tapir, the largest land mammal in South America, is about 400 days. But zoo staff grew concerned about the calves’ health the day after their birth. They were each about half the size of a normal baby tapir, weighing just over 10 pounds each. Some of their bones were underdeveloped, which can lead to orthopedic complications. But the biggest concern was that their lungs were not functioning normally.

The attending zoo specialists collaborated extensively with neonatal specialists for horses, a species related to the tapir, for several months ahead of the birth, and staff from across Cummings School’s hospitals were ready to provide round-the-clock care.

“In preparation of this highly unusual birth, we prepared for many different scenarios and consulted with colleagues at Cummings School of Veterinary Medicine at Tufts University and physicians Linda Van Marter and Elizabeth Flanigan at Brigham and Women’s Hospital throughout the pregnancy,” said Dr. Eric Baitchman, Zoo New England Vice President of Animal Health and Conservation. “We worked closely with the Tufts team throughout the twins’ stay at Cummings School, and are deeply appreciative of the team’s high commitment to care and collaboration with us.” 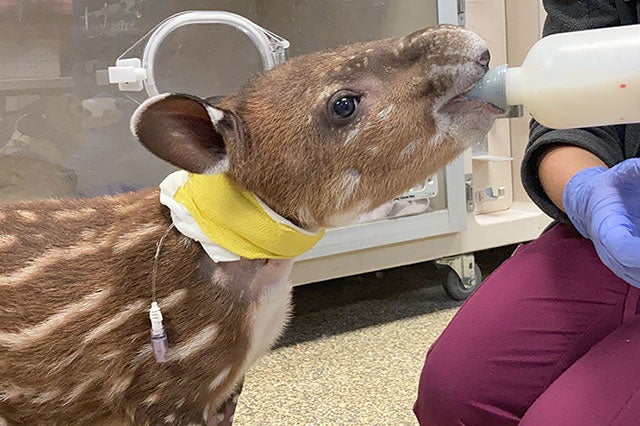 “It was constant care, the very definition of intensive care,” said Michelle Emmott, a veterinary technician in the emergency and critical care department. Photo: Tufts University

The twins were intensively managed in an oxygen enclosure together, and closely monitored by a team of specialists in small and large animal medicine with expertise in neonatology, veterinary intensive care, zoological, and respiratory medicine.

“The case management of these two animals was a good example of very broad teamwork, because it incorporated not only different hospitals and departments at Tufts, but also the Franklin Park Zoo and two neonatologists,” said Associate Professor Daniela Bedenice, a large-animal medicine and critical care veterinarian. “It illustrated the importance of having specialists in various areas who can contribute to the care of these types of animals.”

“It was constant care, the very definition of intensive care,” said Michelle Emmott, a veterinary technician in the emergency and critical care department. “They were being fed, we took blood samples, watched their respiration — they were like babies in a human neonatal intensive care unit.”

They both had evidence of pneumonia. The female, Millie, was not very responsive at first, was very weak, and had significant diarrhea. She also had serious electrolyte imbalances, which were partly due to dehydration. While in the hospital, their mother supplied some of the milk for the babies, but not a large volume, so Bedenice and her colleagues supplemented with a goat’s milk mixture, previously designed for the feeding of healthy baby tapirs. But they soon discovered that goat milk is higher in potassium than tapir milk, which led to a significant elevation in blood potassium levels for Millie.

“We had to dilute the goat milk accordingly to solve this unanticipated challenge, because it's not commonly known what potassium levels are in tapir milk,” said Bedenice. 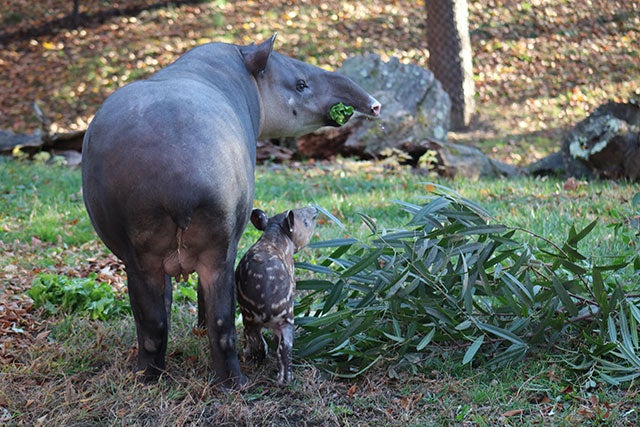 “From an internal medicine standpoint, this was certainly a once-in-a-lifetime experience,” said Assaad Khoury, a veterinarian and first-year internal medicine resident at the Hospital for Large Animals. Photo: Courtesy of Zoo New England

Another major challenge with the calves was the difficulty of placing an intravenous catheter, which was necessary to draw blood and give medications. Bedenice said Associate Professor Elizabeth Rozanski, an emergency and critical care veterinarian at Foster Hospital, was “our hero, using ultrasound guidance in order to access the twins’ veins, which required extensive monitoring over time and antimicrobial management to treat their infection.”

Over the next few weeks, Millie’s condition improved, and she returned to the Franklin Park Zoo to be reunited with her mother. However, her brother’s condition deteriorated, and he remained at the hospital. His pneumonia was much more severe, which led to acute respiratory distress syndrome (ARDS). He remained dependent on a ventilator to breathe, and his body could not establish normal intestinal function. In early November 2020, due to a poor prognosis, the decision was made to humanely euthanize him.

“I was so heartbroken by that little boy,” Emmott said, choking up at the memory. “The time spent caring for him was worth every minute, and I would do it again a hundred times over.”

Baird’s tapirs are an endangered species closely related to horses and rhinoceros. When they’re born, they have a furry coat covered in spots and stripes — resembling the pattern on some deer species — that fade around six months of age when their coat darkens. They like water, given their natural habitat is the humid South American rainforest.

“When Millie got better, we offered her little tubs with water she could lay in and splash around,” said Assaad Khoury, a veterinarian and first-year internal medicine resident at the Hospital for Large Animals. “We also acclimated her to the normal noises she may encounter in her natural environment, by playing rainforest sounds.”

Abby’s reunion with Millie, whose name is a nod to her late father, Milton, was gradual and required minimal intervention. Zoo staff first let them smell each other through a fence over several days, and after they were fully reintroduced, Millie was seen nursing within hours. Abby bonded quickly with her baby, which, as Khoury explained, was not a certainty and could have gone either way.

“To compare it to other species, like horses, when a foal is born and the horse doesn’t bond with them immediately or if the foal is taken away for an extended time, the mom tends to reject them. So, it was amazing that Millie and Abby took to each other quite quickly,” he said.

Millie made her exhibit debut in mid-November 2020. “While we were saddened when the male tapir twin passed away, we have taken great joy in Millie’s successes. She continues to grow and thrive, and is an incredible ambassador for her species,” said Baitchman.

Emmott has seen updates via video — “she's not so little anymore, but she still has her zoomies!” she said — and she hopes to arrange an in-person visit soon with the group of the hospital staff who cared for her.

“From an internal medicine standpoint, this was certainly a once-in-a-lifetime experience,” said Khoury.