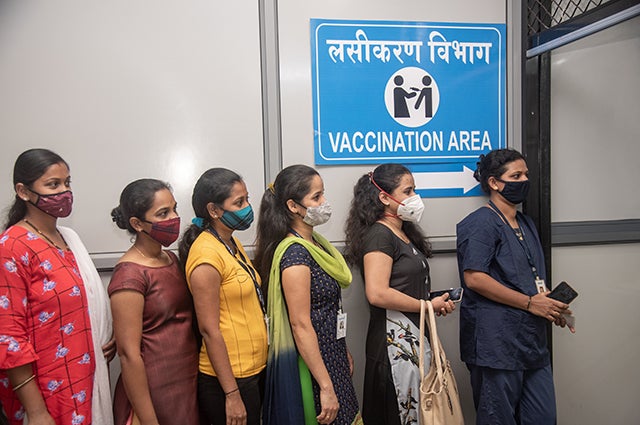 One of the greatest roadblocks the world faces to finally ending the COVID-19 pandemic is vaccine nationalism, where countries rush to secure shots for their own populations while ignoring global needs, said Salim Abdool Karim, director of the Centre for the AIDS Program of Research in South Africa.

“There is a mistaken belief by some countries that they can vaccinate only their populations and they will be safe. It is simply not true,” Karim said. “In this world we live in, no one is safe until everyone is safe, and there is no end game that sees one country succeeding in controlling the virus while the rest of the world is dealing with rampant spread.”

Karim spoke on March 30 to an online audience as part of the Tufts Research Forums 2021, presented by the Office of the Vice Provost for Research. The panel discussion, which you can watch here, focused on global successes and challenges of the COVID-19 vaccine rollout, and featured Karim along with Ramanan Laxminarayan, founder and director of the Center for Disease Dynamics, Economics & Policy in Washington D.C. and New Delhi. The panel was moderated by Simone Wildes, an infectious disease physician at South Shore Hospital and a clinical assistant professor at Tufts University School of Medicine.

Countries all over the world have engaged in vaccine nationalism, Karim said. The Canadian government, for instance, purchased enough vaccine to immunize every citizen five times over. The European Union took action to curb exports of the vaccine to other countries. And until recently, the United States had refused to join COVAX, the global initiative to ensure equal access to COVID-19 vaccines, Karim said.

The most effective way to end a pandemic is for all countries to vaccinate their populations at similar rates, “suppressing the virus at a global level,” Karim said.

“In a country like India, every problem that exists in smaller countries like the UK or Brazil or the US is multiplied by a factor of 4 to 10, simply because of the size of the population,” Laxminarayan said. Still, he added that India has done “tremendously well” in producing and distributing the vaccine, as well as immunizing citizens. And while about 87 million vaccine doses have been handed out in India, the country has actually exported about 60 million doses. Laxminarayan said that has made the vaccine available to smaller countries in Asia that may not otherwise have had access yet.

Karim reflected on lessons learned from the pandemic—one being our profound connection to and reliance on one another.

“Our interdependence has never been this clear before,” Karim said. “We saw how a virus that started in one small town in China can spread and reach every home in every corner of the world.”

That interdependence at all levels of society—from working with the neighbors on our streets to working with countries around the world—is also our secret weapon in finally defeating COVID-19, Karim said.

“If we are to really deal with this disease, we have to start on that basis—understanding our interdependence and using it as a weapon against this virus. We can beat this virus by standing together.”