On a microscopic level, humans face an existential threat every day. All sorts of tiny pathogens, like bacteria and viruses, work constantly to get inside our bodies, reproduce, and continue their species—which, unfortunately for us, often leads to disease and sometimes death.

Luckily, humans and other mammals have developed a few ways to avoid that fate. Over millions of years, our immune systems evolved to spot invaders and destroy them before they strike, keeping our bodies safe and healthy.

A key part of that system—a class of proteins called antibodies—constantly patrol our tissues for specific threats that have attacked the body before. When an antibody spots a pathogen it recognizes, it can latch onto the invader, block some of its functions, and send out a signal to the rest of the immune system to come dispatch the bad guy.

They’re elegant molecules, says Chuck Shoemaker, and can be used for a variety of medical therapies. Shoemaker, a professor in the Department of Infectious Disease and Global Health at Cummings School, is currently working to harness antibodies’ unique skillset as pathogen hunters. Ultimately, he says, he’s aiming to turbocharge their abilities in the lab, and use the resulting über-antibodies as components of new treatments for deadly diseases.

Shoemaker works specifically with antibodies from camelids (animals like alpacas), which have a simpler structure than most other mammalian antibodies and can much more easily be re-engineered for use in therapies or diagnostic tests. 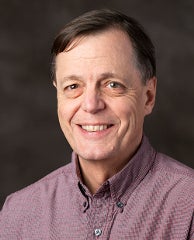 “We can link two or more antibodies together as a single protein,” says Chuck Shoemaker. “We can design them to target almost any disease agent—from cancer cells to infectious pathogens—with high potency and specificity.”
In order to make these molecules, Shoemaker immunizes an alpaca against a specific pathogen, then takes a blood sample that contains its antibody-producing cells. He then extracts the DNA that codes for those antibodies, edits it in the lab, and use it to create enhanced new antibody molecules.

“Using that method, we can link two or more antibodies together as a single protein. Such molecules can then perform new functions not possible with conventional antibodies,” he says. “We can design them to target almost any disease agent—from cancer cells to infectious pathogens—with high potency and specificity.”

The antibodies themselves don’t always do the dirty work. Their job is often to act as a kind of homing device that can guide other molecules in the body to a specific target. But the fact that they can latch onto a specific target themselves isn’t small potatoes—in fact, it can sometimes be enough to stop a disease in its tracks, Shoemaker says. If his lab-made antibodies attach themselves to the business end of a toxic molecule, he notes, they can effectively stop that molecule from interacting with anything else, rendering it harmless.

During recent work with scientists at New York University and Massachusetts General Hospital, Shoemaker’s team did just that. In a pair of studies recently published in the journal Science Translational Medicine, he and his colleagues showed that specially engineered antibodies could help treat cases of botulism, a rare but deadly paralytic disease related to tetanus.

The disease itself is most commonly caused by eating canned foods contaminated with the bacteria Clostridium botulinum, which produces a powerful toxin that enters the body and attacks motor neurons. More worrisome is that it is also a very dangerous bioterror threat, Shoemaker notes. The substance works its way into the neurons themselves, shuts down their ability to send signals to muscles, and leaves patients unable to breathe on their own.

It’s a pretty awful way to go, and at the moment there are no antidotes available once it sets in. But by designing an engineered camelid antibody that could bind the toxin, Shoemaker gave his collaborators a means to reverse its deadly effects in lab animals.

“The antibody we created binds to a part of the toxin called a protease, which normally chews up proteins inside the neuron and prevents the cell from sending out neurological signals. If you inhibit the protease with an antibody, however, it can’t chew them anymore and the neuron can recover,” he says.

Typically, antibodies can’t enter neurons on their own, so Shoemaker and his collaborators needed to attach them to a vehicle that could: an inactive variant of the botulism toxin itself. Over millions of years, he notes, that molecule has evolved to find neurons in the body, tunnel into their interior, and block key neurological processes.

To take advantage of those properties, Shoemaker’s collaborators engineered DNA that incorporated both a recipe for that toxin and a recipe for a new antibody, creating a single protein that did both jobs. On one end, it contained a neuron-invading toolset; on the other, it carried a custom antibody that stopped the real botulism neurotoxin from continuing to paralyze its host.

It’s an innovative approach, and it doesn’t stop at botulism, Shoemaker says. By combining the right antibody with the right delivery system, it may be possible to prevent many other diseases before they wreak havoc in the body.

Shoemaker plans to continue collaborating with other labs and biotech companies to engineer new therapeutics based on camelid antibodies. One idea in the works, he says, is a spray that coats patients’ nasal passages with antibodies for COVID-19, effectively stopping virus particles as they’re inhaled.

Another involves antibody-covered probiotics that, once swallowed, can immobilize pathogens in the gut to prevent them from establishing infections—a preventive measure which could reduce the spread of diarrheal diseases, one of the leading causes of death worldwide for children under five.

“It’s vastly easier to prevent a disease than to cure it,” says Shoemaker. “If you try to block an infection right at the start, you only have to stop a small number of invading pathogens. If you wait, those pathogens will reproduce in the body and turn into huge numbers that are very difficult to treat,” he says.

“By using the new synthetic RNA and viral-based gene therapy agents like the ones now being used for many COVID-19 vaccines, we can rapidly engineer and deliver our antibodies to treat and protect patients against all sorts of diseases,” he adds. “It’s really just our imaginations that limit us.”