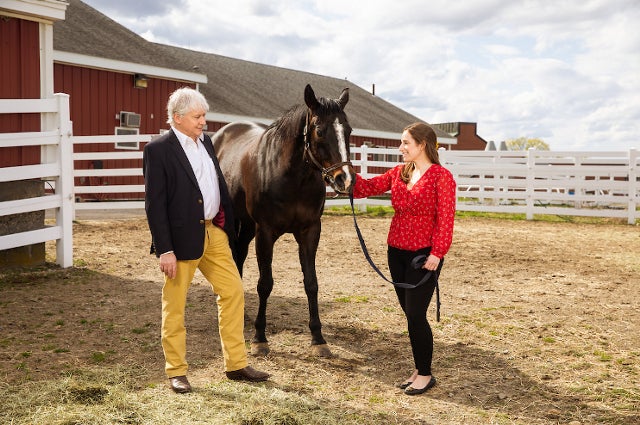 Publishing one academic paper is cause for celebration, but Cummings School for Veterinary Medicine student Abby Brisbois, V21, has the satisfaction of being among the authors of two recent papers in the American Journal of Veterinary Research. The research was used to help develop and validate legwear now on the market to help horses recover from soft-tissue injuries of the lower limb.

Horses, particularly those that race or compete in performance events such as show jumping or dressage, are superb athletes with a tremendously efficient physiology.

“During load-bearing exercise, for every 100 units of energy a horse stores in its tendons, 93 units—93 percent—are available to propel the horse forward or do other work, and only 7 units are lost, primarily as heat,” said the papers’ corresponding author, veterinarian Carl Kirker-Head, who holds the Marilyn M. Simpson Chair in Equine Medicine at Cummings School’s Hospital for Large Animals. “In contrast, a car engine wastes about 70 percent of its energy as heat.”

Horses regularly function close to their maximum athletic capacity with little margin for error, and their lower limbs are, so to speak, their Achilles heel. Tiny tears in the tendons and ligaments that control the lower bones and joints, particularly the fetlock—which is functionally equivalent to the human ankle—are common, and small injuries can coalesce into severe clinical trauma.

These injuries are notoriously hard to heal, said Kirker-Head. Stall rest with controlled gradual return to exercise is the core prescription. But if the tendons and ligaments stretch too much or too soon, re-injury results. The two studies demonstrated that legwear developed by Kirker-Head and his team of student researchers effectively limited over-extension of the fetlock in uninjured horses at the walk, trot, and canter, thereby protecting tendons and ligaments. The studies also showed that the snug, cuff-like device was safe and appeared comfortable. 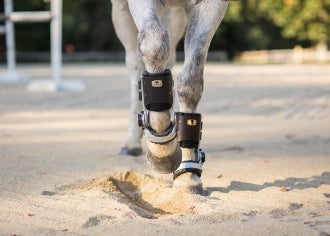 A horse with the legwear for lower limb soft-tissue injuries. Photo: Laura B. Kozlowski
Kirker-Head has been developing the legwear for more than a decade, ever since he got a phone call from Rhode Island horsewoman Wendy Drumm, who was searching for a better way to heal such leg injuries. Many bandages and boots were commercially available, but none had been scientifically proven to keep a horse’s ankle from extending too much while allowing moderate exercise that would encourage healing.

“We had some ideas about what such a device might look like and how it might work that we wanted to test,” said Kirker-Head. Drumm provided the passion and the funding, while Kirker-Head provided the science to develop and test prototypes.

Students were involved almost from the start of the project. “We do a wonderful job at Cummings School of offering research opportunities to students,” said Kirker-Head. “Some have experience as undergraduates, some don’t, but they all want to learn research methodology, and they like projects that have immediate relevance for clinical situations.”

Brisbois began working with Kirker-Head in 2015, after seeing an advertisement for a research assistant at the Hospital for Large Animals. Although she’d never worked with horses, she thought the job would be a good way to get more hands-on experience to enhance her future application for admission to veterinary school.

Brisbois’s responsibilities included helping Brenna Pugliese, V18, the first author on one of the recent papers and now a surgical resident at Cornell University College of Veterinary Medicine, to collect data on the amount of force being applied to the legwear, which was equipped with wireless sensors.

They paired that data with video of horses moving at different gaits on a treadmill. Brisbois frequently “suited up” the horses by affixing reflective markers in precise locations on their legs before recording slow-motion video of them exercising. She then helped analyze and interpret data on how much force the legwear absorbed and the range of motion of the joint during exercise and at rest.

“It was always the coolest feeling to be in the same room as a horse cantering along on a treadmill,” Brisbois said.

She also learned that research means encountering the unexpected and patiently finding ways around obstacles. “Figuring out how to overcome a challenge that you’ve run into was always rewarding,” she said.

Watching the legwear evolve from lab to market also gave the students an opportunity to see the evolution of a new product and the ups and downs of a startup enterprise, which began in Rhode Island and is now based in Lowell, Massachusetts, under the name Horsepower Technologies Inc. “As veterinarians, we need to do better leveraging innovation and the business side of things,” said Kirker-Head.

The enjoyment Brisbois found in research and data analysis led to another project with Kirker-Head: designing and compiling a comprehensive orthopedic research database for the AO Foundation, the leading education and research organization specializing in surgical treatment of musculoskeletal disorders in people and animals.

She helped present the work at an international forum in Basel, Switzerland, which she said was “an amazing opportunity” to meet distinguished human and veterinary surgeons from around the world. Similarly, Pugliese presented findings on the legwear at conferences in Berlin, Lisbon, and Nashville.

“When you see a young student presenting at a meeting where the ‘competition’ is third-year residents five years ahead of them, it’s great for the student, the faculty mentor, and Tufts,” said Kirker-Head.

After graduation, Brisbois hopes to work in a general veterinary practice while continuing her involvement in Cummings School research. She believes that having published research will help her stand out in her job applications.

“Having worked in research gives me a better understanding of how important the whole process is for continually moving the field of veterinary medicine forward,” she said. “As a veterinarian, it’s important to be up-to-date on the current literature and science, and I think this work shows my dedication to staying informed about the latest advances in veterinary medicine.”