Confronting the Legacy of Anti-Asian Racism in America

Historian Erika Lee, J91, details the long ugly history of discrimination against Asian Americans, how it continues today, and what can be done about it

Attacks on Asian-Americans have been growing in the past year—seen most visibly in the killings in Atlanta in March. One Asian American advocacy organization reported some 3,800 anti-Asian racist incidents across the U.S. during that period—a 2,500 percent increase from previous years.

At the same time, a recent Pew Research Center survey found that almost one-third of Asian American adults have feared someone might threaten or physically attack them, and 81 percent of Asian adults think violence against them is increasing.

To address this growing concern—and as part of Tufts’ anti-racism initiatives—Erika Lee, J91, spoke on April 20 to a university audience about the history of discrimination against Asians in American history, and how those biases have changed but not diminished. The granddaughter of Chinese immigrants, Lee is Regents Professor, the Rudolph J. Vecoli Chair in Immigration History, and director of the Immigration History Research Center at the University of Minnesota, and author of America for Americans: A History of Xenophobia in the United States.

The acts of hatred against Asian-Americans “are not random acts perpetrated by deranged individuals,” Lee said. “They are an expression of our country’s long history of racial violence and discrimination targeting Asian-Americans and Pacific Islanders. And they are part of the same processes of systemic racism impacting Black, Indigenous, Latinx, and other peoples of color that have defined America since its founding.”

Asian Americans now number nearly 20 million, the fastest growing racial group in the U.S., “but we are in crisis from the multiple and disproportionate effects of the pandemic on our diverse Asian American Pacific Islander communities,” she said.

Lee’s presentation covered the history of anti-Asian bias in the U.S., how it has changed, and what can be done about it. Here are a few takeaways from her talk: 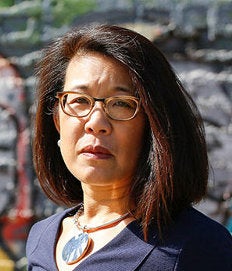 “The long history of anti-Asian racism dispels any notion that what we are seeing today is just a passing fad led by an extremist and divisive former president or by deranged individuals,” said Erika Lee. Photo: Lisa Miller/University of Minnesota

She cited a disturbing history of violence against Asians, who first came to the U.S. in large numbers in the 1800s to build railroads and prospect for gold. “In 1871, 17 Chinese immigrant men were lynched by a mob of 500 in Los Angeles,” she said. “This was the largest mass lynching in U.S. history.” In 1885, a mob of armed white men forcibly expelled the 700 Chinese immigrant residents of Tacoma, Washington, and burned its Chinatown to the ground.

The violence was matched by legal actions. The 1882 Chinese Exclusion Act was the first federal law to single out an entire immigrant group for exclusion based on race.

In the 1920s, “the dominant American attitudes about Asian immigrants labeled them as Asiatic invasions, Oriental hordes, or a yellow peril—an unending threat and danger coming from the East with the intention of dominating and destroying the West, a threat to global white supremacy,” she said.

Anti-Asian sentiment peaked during World War II, Lee said, “with many Americans, led by politicians and the media, believing that Japanese Americans represented a national security threat to the country.” In February 1942, the federal government initiated the forced relocation and mass incarceration of 120,000 Japanese Americans for the duration of the war. “Two-thirds were American-born citizens at the same time.”

The stereotype of Asian Americans as a model minority is harmful, too. After World War II, a new view was promoted in the media and by politicians—“these are people who are economically and academically successful, a model minority,” said Lee. “They have high moral values. They adhere to strict gender roles and they enjoy strong stable nuclear families.” Lee’s grandmother was even profiled in a newspaper story, named as “mother of the year” in western New York in 1953.

But these portraits of success obscured “ongoing discrimination and poverty and exclusion amongst many Asian American families,” she said. The Asian American model-minority stereotype “was being used as a wedge issue to delegitimize Black and other civil rights leaders’ insistence that institutionalized racism remained an enduring problem.”

The stereotyping continued, as Asian Americans were seen “also in comparison to whites, this time as a threat that displaces whites in elite colleges and in sought-after professions.” That ignores the fact that “more than 12 percent of Asian Americans live below the federal poverty level, and many have no education beyond high school.”

Anti-Asian attacks are often treated as isolated incidents, but they are not. Whenever anti-Asian hate crimes do make it into the news, they “are characterized as random, as isolated instances, rather than as the latest examples of systemic anti-Asian racism,” Lee said. Minimization of anti-Asian racism in the United States has left many unprepared for increasing attacks during the past year.

“One aspect of this racism draws on the long history of treating Asian Americans as outsiders and as foreigners, as enemies, rather than as citizens,” Lee said. “The anti-Asian violence also reflects the ways in which exceedingly diverse populations of people who can trace their roots to countries throughout East Asia, South Asia, Southeast Asia, and the Pacific islands continue to be lumped into one homogeneous group and treat us similarly as threats.”

The spread of racist language by politicians and the media matters. “An equally important factor has been that some members of the media and some of our highest elected officials have deliberately and consistently used racist language, tying COVID-19 to Asians,” Lee said, using terms such as Chinese virus and Wuhan virus.

“These words matter, especially when they repeatedly came from the White House,” she said. During the previous administration, researchers found that the anti-Chinese rhetoric promoted by leaders, such as former President Donald Trump’s use of “Chinese virus,” directly correlated with racist incidents against Asian Americans.

There are positive ways to address these issues. Congress recently held hearings on discrimination and violence against Asian Americans and Pacific Islanders, Lee said, and the Senate last week advanced the COVID-19 hate crimes bill that would create a new position at the Justice Department to expedite the review of hate crimes related to the coronavirus pandemic, among other provisions.

“These are all crucial actions, but they’re not enough. We cannot rely only on Congress to solve this problem,” said Lee. What’s needed is greater support for local community organizations that have already been serving Asian Americans. One positive outcome, she noted, is the increased protest and activism, as social justice movements have organized around stopping Asian hate.

Teaching more Asian American history at all levels of education would help, too, she said. “Asian American history is an essential part of an anti-racist education,” Lee said. “The long history of anti-Asian racism dispels any notion that what we are seeing today is just a passing fad led by an extremist and divisive former president or by deranged individuals.”

Historian Erika Lee to Deliver Commencement Address for Class of 2022

The Many Experiences of Being Black in the Wider World