Meet the Next President of the Tufts Undergraduate Student Government

Amma Agyei, E22, will be the first Black female president of the Tufts Community Union Senate 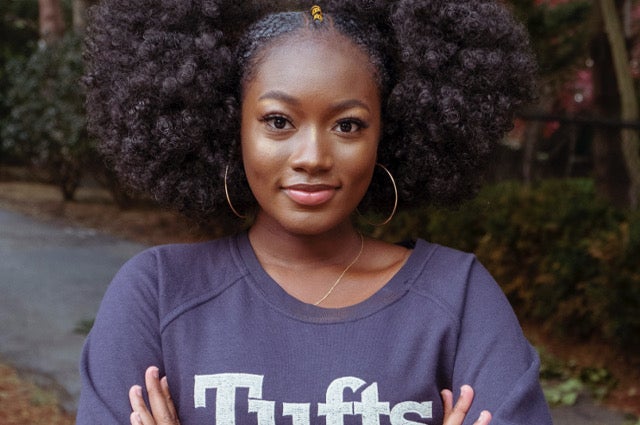 This spring when the Tufts undergraduate student election season was starting, Amma Agyei, E22, didn’t even consider running for president of the student body.

Sure, she’d been a senator in the student government as a freshman, the Africana community representative for her sophomore and junior years, and president of the Black Student Union for the last two years. But it wasn’t until friends urged her to run for president that she put her hat in the ring.

It was a good move—she won 70% of the vote, and became the first Black female president of the Tufts Community Union (TCU) Senate, as the student government body is known. “The community voted for me based on my values, based on what I represent and what I stand for,” she says. “It feels good to know that they supported me.”

Katrina Moore, director of the Africana Center, said she has shared the historic election with the Africana alumni community, “who are really excited and eager to pledge their support, particularly from the Black Presidents Club, which includes five former students who served as president of TCU Senate during their years at Tufts.”

Agyei, who grew up in Ghana, first came to the U.S. in 2016 for her junior year of high school in Marlborough, Massachusetts. A year later she was class valedictorian. Now on the pre-med track, she is majoring in biomedical engineering.

When she started at Tufts, she planned to just focus on academics; she had joined many clubs and groups in high school, and thought it would be best to keep things simpler in college. It didn’t work out that way, of course, as she got involved in clubs and student government. But she’s disciplined.

“I think I’m just efficient at managing my time and knowing what I work on first and get it out of the way,” she says. “Especially for academics, what I try to do is get all my homework done over the weekend.”

As TCU president for the 2021-2022 school year, Agyei says she will be focusing on several goals. Among them are working closely with the FIRST Resource Center and administrators to develop more resources for first-generation, low-income, and undocumented students. That would include developing a textbook stipend, which some universities provide for students whose families qualify, she says.

Agyei is also in favor of adopting shadow grading, in which first-year students can opt to have pass-fail grading; MIT and Wellesley College, among others, have such policies already on place. Many students come to Tufts undecided on their majors, she says, and this policy would allow them to try out different areas of study without worrying if those grades will affect their GPA.

“I feel like that would take off the stress from a lot of students and allow them to adapt to college, learn how to manage their time, and learn which classes they want to take,” she says.

In addition, she also plans on working with the Tufts Police Department to come up with reforms to make sure that all students feel safe on campus.

Agyei has been a strong supporter of the Africana community, Moore noted, serving as a TCU community representative for two years and chairing the Africana Advisory Alliance (AAA) group.

“Through her leadership of AAA, she has been the convener of our bi-monthly meetings with executive board members of student organizations and provided timely updates and information that helped them to feel supported as they planned events and activities to carry out the mission of their organizations,” Moore said.

“Amma’s drive and determination is an invaluable asset to helping us to build a strong sense of community and belonging for students who often feel isolated and unheard,” she added. “Amma is simply awesome.”

One other thing that Agyei wants to work on is attracting more Black students to Tufts. She’d like to see campus tours incorporate more landmarks from the African American Trail Project, and tell more about accomplishments of Black students from Tufts. She’s also hoping for orientation programs catering to underrepresented students as well.

Though she will be a senior next year, she’s also planning on sticking around Tufts for a while to come. As a pre-med student, she has considered medical school, but feels she can help people as well through engineering—and she was just accepted to the Tufts master’s program in mechanical engineering.