Building a Better Robot to Disinfect for COVID and More

Inspired by a hospital stay, a Tufts team creates a better and cheaper ultraviolet C light device for indoor spaces 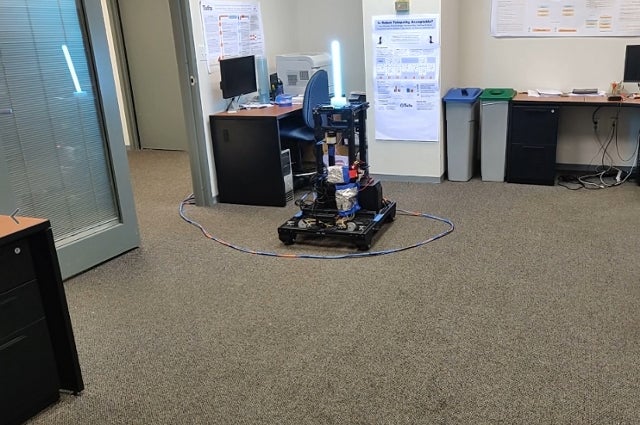 When Matthias Scheutz found himself waiting in a makeshift COVID-19 exam room at a Bloomington, Ind., hospital, in March 2020 with symptoms of the viral illness, he had plenty of time to think about how places like hospitals are disinfected.

Even post-recovery, Scheutz, a professor of computer science who was on sabbatical at the time, kept pondering better ways to disinfect indoor spaces in the face of the pandemic.

This was unfamiliar ground for Scheutz, the director of the Human Robot Interaction Laboratory, who typically studies questions such as whether robots should to be able to say no to a command or can be empathetic. “I knew very little about viruses, except that I had one,” he said.

But after reading up on the science of viruses and talking with colleagues, he identified one way to disinfect spaces effectively and efficiently: using ultraviolet C (UVC) light. Its ability to deactivate viruses was well-established, but UVC cleaning devices designed to tackle SARS-CoV-2 were costly—often more than $100,000 each—and inefficient.

“Basically, people wheel a UVC lamp into the contaminated area, leave it in the middle of the room, and turn it on,” he said. “The process uses a lot of power and takes a long time, because light energy drops off sharply the farther away it is from a surface. If you add just a little distance you lose a lot of energy.”

Further, existing mobile disinfecting robots lack a “formal guarantee”—proof based on advanced mathematical calculations that they will cover an entire space in a way that guarantees that every surface will be disinfected.

Scheutz knew that his team could design and build a user-friendly robotic platform that could autonomously navigate within a space employing UVC light. But to calculate the exact locations the robot needed to go to, how long it had to remain at each point to guarantee virus deactivation, and what path would be quickest, he needed help.

The two groups hadn’t previously collaborated, but the partnership went smoothly, with Zoom meetings replacing in-lab brainstorms. Christopher Thierauf, at that time a pre-doctoral student and now a first-year Ph.D. student in the Human Robot Interaction Laboratory, had primary responsibility for designing the robot, aided by staff researchers Zachary Haga and Evan Krause.

Jonathan Conroy, a junior in the School of Engineering focused on computational geometry, led the process of developing a working prototype for the algorithm that would determine the robot’s trajectory, transforming ideas brainstormed weekly with Hugo Akitaya, Andrei Gonczi, Parker Rule, and other members of the computational geometry lab.

Computational geometry isn’t exactly a household term, but the field underlies many common tools, such as smartphone apps that calculate and map the shortest driving route for cars, explained Korman, who oversaw the process and ensured the quality of the work. “I acted as a sounding board, but they did the hands-on work.”

The prototype robot carries a robust battery, a UVC germicidal lamp, and an embedded computer. Multiple sensors create a point cloud—a collection of points that represents a three-dimensional shape—and run it through the path-planning algorithm.

The algorithm maps the space to create a two-dimensional floor plan, determines where the robot should stop and turn on the UVC light and fixes the duration of illumination, and chooses the order in which locations are visited. The prototype is able to disinfect roughly 35 percent more indoor space—and 30 percent faster—than a conventional static device, according to tests. Scheutz estimates that when manufactured the platform could cost as little as one tenth of currently marketed devices.

To control costs and facilitate future changes and replication, Thierauf used off-the-shelf components wherever possible, but he had to improvise when parts weren’t available because of pandemic-related supply chain interruptions.

For example, though the robot fits through a standard doorway, Thierauf would like to streamline the chunky extruded aluminum frame so it can more easily navigate tight spaces. Future enhancements could enable the robot to use travel time for disinfection, further speeding up the process.

Conroy and Thierauf will present a paper about the project to the 2021 IEEE International Conference on Robotics and Automation later this spring. It will be Conroy’s first research presentation and Thierauf’s first to a major international forum.

Amid all the technological innovations, in the end it was the partnership between the Human Robot Interaction Laboratory and the computational geometry research group that stood out for the project participants. “It was really exciting and kind of cool to collaborate on a project that required applying highly theoretical proofs to a real-world problem,” said Conroy.

Who Are Tomorrow’s Engineers? Meet Five with Big Ideas

My Robot, My Friend?

Robotics for the Whole Human